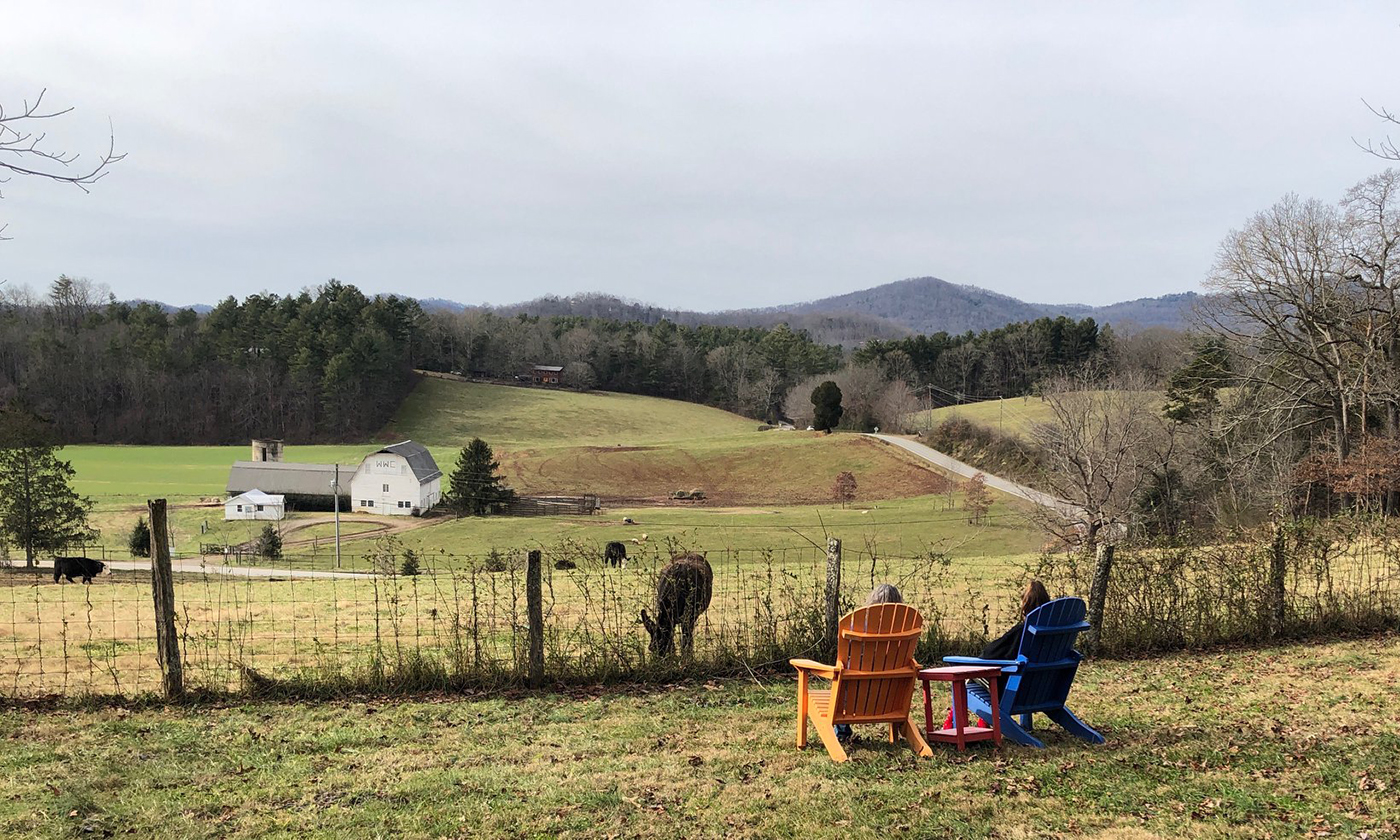 View of the white barn at Warren Wilson College from the author's campus rental.
Photo by Lyn O'Hare

“Next week, classes will be online, but we’ve got an hour to brainstorm ideas for our environmental education class,” I told my students.

That was March 12, 2020. After a week of monitoring the news, the surreal had happened: The threat of the coronavirus consumed the small campus where I’d taught for 20 years. Seated at a picnic table near the college’s vegetable garden, I looked at my nine seminar students knowing most would soon leave these mountains of North Carolina. Some who were graduating seniors would be leaving for good.

I didn’t mention the deep pit of dread in my stomach: How would I transform a course in which we taught nature awareness, gardening, and cooking in elementary and high schools in our rural valley into one delivered by videoconference? After a half-semester developing lessons on topics such as food security and the climate crisis, we faced another kind of emergency—a global pandemic—and we’d have to continue our learning through a split screen on Zoom.

But my students are resourceful and accustomed to MacGyvering whatever it takes to creatively respond to environmental puzzles. Ours is a work college, one of nine in the country where each student logs 10 to 20 hours a week—on crews such as the garden, farm, blacksmith shop, genetics lab, and the library. This model of education is often messy, but it’s always real.  In my courses, students use skills from their work on campus, such as growing food and managing forests, to address local and regional needs. In short, they are used to digging their hands into whatever needs doing—even if they have to do it virtually.

“We could learn new skills in sustainable living and then teach each other,” one student named Lucy said as we sat by the garden—the day everything changed. Her response sounded so practical: We’d been preparing to facilitate lessons such as transplanting kale and learning about the life cycle of chickens with teenagers and first graders. But public schools would be closed in a matter of hours: We’d have to cancel our community projects.

On a piece of paper, the students made a list of skills they already had—from weaving fiber to making herbal remedies—and then another column of what they wanted to learn.

After an anxious weekend of rewriting the course schedule, I greeted them from my laptop in the bedroom of my 900-square-foot house on campus. This was the only place where I could close the door to the sounds of my grown children home from school. From my window, I could see grazing cows and rolling mountains. What my students had here and what they looked forward to—graduation, jobs, housing, community, Internet access—was suddenly gone when they left the dorms for home.

During class time, I peered from behind my screen into their kitchens and living rooms—from California to Maine. I tried not to fixate on their childhood bedrooms with the athletic trophies and flowery comforters. My 21-year-old daughter—who hadn’t lived at home in three years—was sequestered in her top bunk in a room shared with her 14-year old sister. She’d left a similar work college in Berea, Kentucky, where student labor maintains the school. When she stayed awake after midnight doing homework online, it was like she was studying abroad at home—living several time zones away in our tiny rental. And so I empathized with how my students navigated their own dislocation while learning about sustainable living: I was trying to live with that dissonance too, a metaphor for the anxious months ahead.

Together, but apart, we dove into our “Virtual Skills Share,” my attempt at rebranding a hands-on course. Spending synchronous time online during our class period was optional—in case they couldn’t access the Internet—but most of the students showed up for the weekly sessions. One learned to preserve vegetables and fruit and taught us from her parents’ kitchen: “I canned strawberry preserves,” she said, after explaining how to work a pressure cooker. Then she sheepishly added: “And my mom wanted to can these hot dogs, too.”

Another studied meditation and led us in breathing exercises, an antidote to the anxiety many felt without the structure of school. One student created a series of gardening videos. A graduating senior named Cayce, who had stayed to work on the campus farm, learned how to make sourdough bread in his dorm and promised to bring me a loaf before graduation.

Their faces looked years younger in the childhood spaces and dislocated places: the cobalt-blue paint color on the wall, the stuffed animals on a shelf, the interruption from a sibling: “Mom said to put the meat in the freezer!”

I felt like an interloper absorbing the entirety of their lives and the uncertainty of our future together. At the closing of one class, I showed drone footage of campus: soaring images over the white barn, pink azaleas budding, and a swooping descent above a rushing stream. The students were silent after the video ended until one piped up: “It’s like Minecraft meets nature!” Somehow this semester, we were young and old at the same time, reminding me of writer Rebecca Solnit’s line: “Many disasters unfold like revolutions.”

The coronavirus may foreshadow how climate change will disrupt our communities. The devastation might also unveil a counterrevolution already brewing, especially among young people such as my former student Kelsey Juliana, the lead plaintiff in a case suing our federal government to try to protect the right of youth to a healthy climate. Other students such as Sally Thames protested at city hall as part of the Sunrise Movement to ask local officials in Asheville, North Carolina, to declare a climate emergency, which they ultimately did. I felt this cocktail of hope and fear for my students who will graduate as a diaspora in the coronavirus class of 2020.

The week before virtual graduation, my student Cayce brought that hot loaf of sourdough bread to my doorstep, and we visited from the new normal of 6 feet. After working on the farm, he described admiring those farmers who understood in-depth environmental and agricultural issues but could do the practical work: like assisting a cow giving birth and then putting up a fence to protect the mother and calf.

“I think a better world will include people with sustainable skills and knowledge they can use throughout their lives,” Cayce later wrote me. “That’s why I love understanding sourdough bread making. I can share the scientific biochemical process if I want, but I can also relish the doing of it, kneading, folding, mixing, and baking a beautiful meal for others.”

To envision a new world, beyond this pandemic and our climate crisis, my students hope for just and healthy communities for all. While a loaf of bread or a can of preserves won’t solve our problems, it’s a step toward a community of right intention, rather than the amoral dysfunction they often see in the news.

I am not a farmer, but at the end of the semester, a call went out over e-mail for campus residents who could line the road to ensure the yearling cows didn’t escape during the move from one pasture to another as a part of rotational grazing. So, after my online class, I ran to join a motley crowd including the admissions director, the physics professor, the farm manager, the blacksmith, and a core crew of students such as Cayce. With brown, black, and reddish cows running toward us, I saw a scrappy but vibrant community—one teaching and learning together, even when we don’t know how this story will end.

That same week, I spied photos on Instagram of saplings planted in honor of the seniors who worked on landscaping. “It felt wrong to do it without the entire crew,” said John, their supervisor, “but planting trees and honoring tradition seemed like the only logical thing to do as we think about our future.”

Underneath the post, a student had added these words: “I wanna come home :)”

After spending seven weeks together online, I watched my students taking steps to build a better world and a home for us all.

The Public Banking Revolution Is Upon Us

How I Found Racial Healing During the Pandemic

How the Climate Change Generation Is Redefining Community