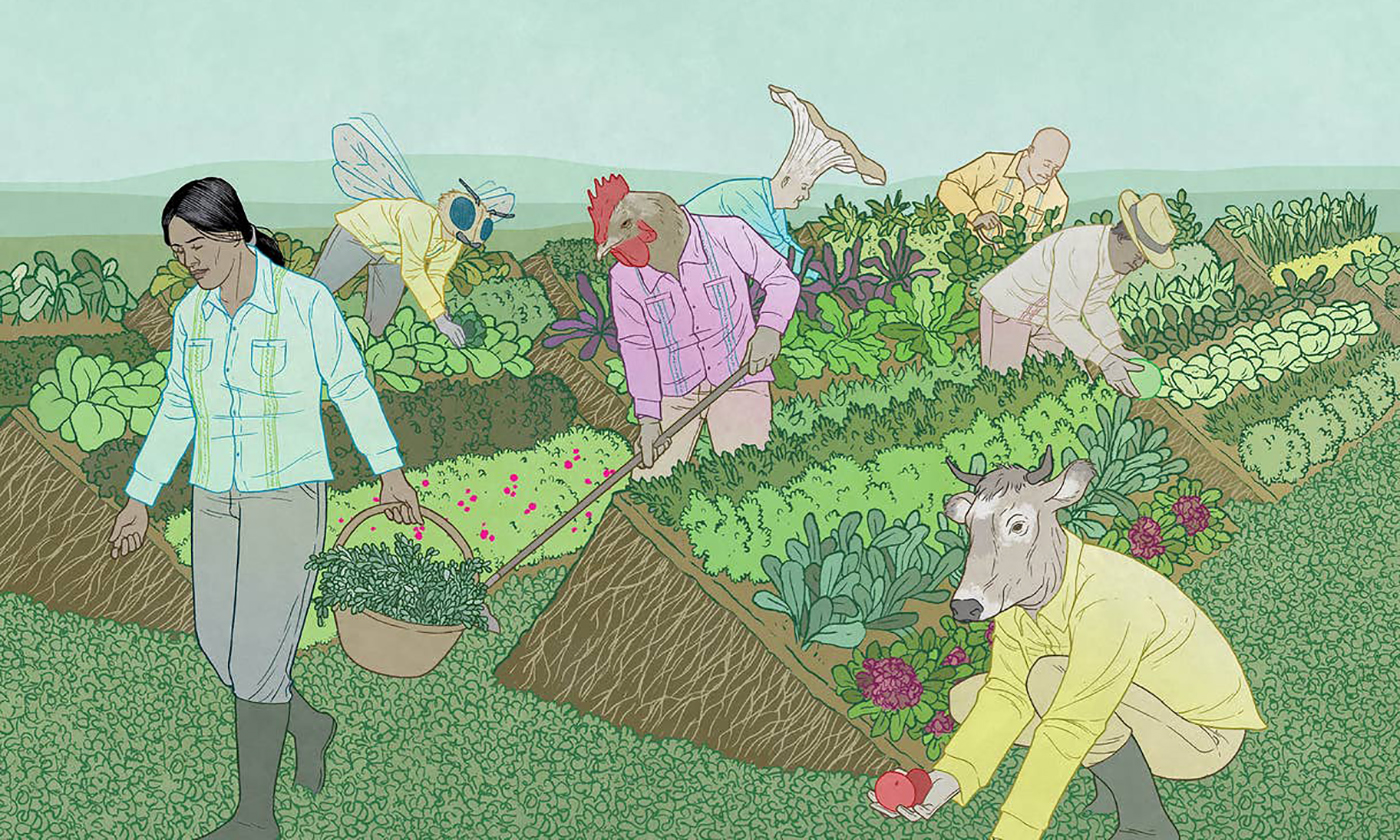 Agriculture is perfectly poised to play a major role in the solution to the climate crisis. By helping young farmers gain access to land, everyone can help play a role.

Illustration by Jon Adams, courtesy of The Perennial Farming Initiative

The recent report from the Intergovernmental Panel on Climate Change shows that agriculture is responsible for 37% of greenhouse gas emissions. There’s hope—and a solution.

From where I stand inside the South Dakota cornfield I was visiting with entomologist and former USDA scientist Jonathan Lundgren, all the human-inflicted traumas to Earth seem far away. It isn’t just that the corn is as high as an elephant’s eye—are people singing that song again?—but that the field burgeons and buzzes and chirps with all sorts of other life, too.

Instead of the sunbaked, bare lanes between cornstalks that are typical of conventional agriculture, these lanes sprout an assortment of cover crops. These are plants that save soil from wind and water erosion, reduce the evaporation of soil moisture, and attract beneficial insects and birds. Like all plants, these cover crops convert atmospheric carbon dioxide into a liquid carbon food, some for themselves and some to support the fungi, bacteria, and other microscopic partners underground. A portion of that carbon stays there, turning poor soil into fragrant, fertile stuff that resembles chocolate cake.

The field rustles with larger life forms, too. Lundgren was visiting this particular field to meet up with a group of his grad students splayed among the plants, sucking insects into plastic tubes to be later identified and counted. Lundgren launched a research institute called Ecdysis back in 2016 to conduct comparative studies between conventional agriculture and regenerative agriculture, which is generally defined as agriculture that builds soil health and overall biodiversity and yields a nutritious and profitable farm product. Regenerative farmers avoid tilling so that they protect the community of soil microorganisms, the water-storing pores they create underground, and the carbon they’ve stashed there. They encourage plant diversity and plant cover that mimics nature in their fields, avoid farm chemicals, and let farm animals polish off the crop residue.

All of us are familiar with conventional agriculture: the miles upon miles of farmland growing only one crop, the destructive tillage that wafts soil and its stored carbon into the air and into our waterways; the use of hundreds of chemicals including pesticides like chlorpyrifos that have been found to cause brain damage in children; the confined facilities that are both cruel to animals and make their impact on the Earth an assault rather than a gift.

This is the kind of agriculture targeted in the most recent report, released Aug. 8, from the Intergovernmental Panel on Climate Change, in which a panel of 100 scientists concur not only that the food system contributes 37% of greenhouse gases, but also that a more sustainable agriculture can help address global warming.

Reading through the report, I can’t help but wonder whether any of those 100 scientists have visited the kind of agriculture that can turn this mess around or whether they’ve just read about it in studies. Whether they’ve ever smelled the soil that comes from these farms or seen the incredible variety of birds and insects thriving alongside the crops. Whether they’ve ever talked to the farmers who are discovering how to grow healthy food and healthy landscapes at the same time.

I first started writing about those farmers back in 2011, when there were more amazing anecdotes than studies, but that has changed. Lundgren himself published a study with his former student Claire LaCanne in 2018. The study followed 10 cornfields per farm on 20 farms over two growing seasons, half of which were regenerative and half conventional. The study tracked soil carbon, insect pests, corn yield, and profits.

The results give the imprimatur of science to the successes regenerative farmers have reported for years. Lundgren and LaCanne found that there were more pests in the conventional cornfields that were treated with insecticides and/or used GMO seeds than in the pesticide-free regenerative fields, presumably because the cover crops attracted battalions of predator insects that decimated crop pests—and because there were no insecticides to kill off those beneficials.

And while the regenerative farms used older, lower-yielding corn varieties without fertilizer and had lower yields, their overall profits were 78% higher than the conventional farmers’. Partly, this was because the regenerative farmers’ costs were so much lower, with no cash outlays for costly insecticides and GMO seeds. They also “stacked enterprises” and had two or more sources of income on the same acre—in this case, they grazed their cattle on corn residue after harvest and got a premium price for pastured beef. What was the primary factor correlating with farm profitability? The amount of carbon and organic matter in the farmers’ fields, not their yields.

The venerable soil scientist Rattan Lal was one of the first people to connect the loss of soil carbon caused by destructive farming to the buildup of carbon dioxide in the atmosphere. In a 2018 interview with Soil4Climate, Lal said that he and his colleagues estimated that regenerating landscapes—farms, forests, coastlands, and so on—could restore up to 150 gigatons (a gigaton equals 1 billion tons) of carbon to the world’s soil in 80 years. All the extra vegetation grown to put that carbon in the soil would store 150–160 gigatons more, resulting in a terrestrial biosphere holding an additional 330 gigatons of carbon, equal to a drawdown of 150 to 160 parts per million of CO2 from the atmosphere. “We should encourage the policy makers that this process of restoring degraded soils and ecosystems is a win, win, win option,” Lal says. “It’s a bridge to the future.”

Several of the Democratic presidential hopefuls have added agriculture to their climate platforms—most notably Rep. Tim Ryan, who proposes policies to support regenerative agriculture and soil carbon sequestration. Just this week, Sen. Elizabeth Warren added to her climate platform a sweeping plan to overhaul agricultural policy, while Sen. Cory Booker announced he would propose the Climate Stewardship Act to the Senate in September; both would pay farmers for conservation practices.

And farmers of the future are ready to take it on.

“Agriculture is perfectly poised to play a major role in the solution to the climate crisis,” says Bilal Sarwari, membership and communications manager of the National Young Farmers Coalition. “By helping young farmers gain access to land, everyone can help play a role.”

I can’t help but believe that the 100 scientists would become hopeful themselves knowing this, hopeful that humanity can turn away from the dire environmental path we’ve been treading.

In Norway, Racism Is Losing. Here’s Why

A New Generation of Black Farmers Is Returning to the Land

Mothers Dying After Childbirth Is a Medical Issue—But Cultural, Too

The Global Economy Needs Fixing, but Tariffs and a Trade War Won’t Do That