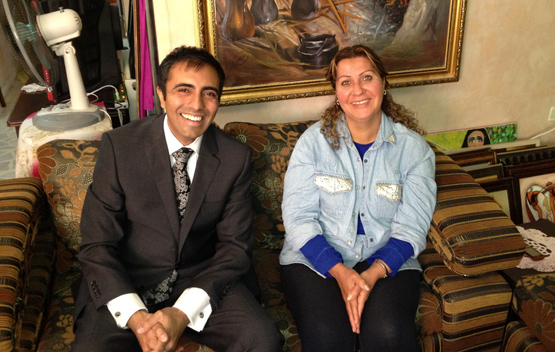 Why an Iraqi single mom and a tech lawyer think they can prove the Iraq War was a “crime of aggression” under U.S. law.
By Corey Hill
7 MIN READ

George W. Bush keeps a low profile these days, making the rounds on the public speaking circuit, engaging in a bit of philanthropy here and there, occasionally sharing his dog paintings or offering an unsolicited opinion on the immigration debate or national security.

The case was filed on March 13, 2013, and the defendants have all been served notice to appear.

Given his role in the current media landscape, it may be easy to forget that just 10 years ago he led an invasion of a foreign country that many in the international community saw as criminal.

Sundus Shaker Saleh, an Iraqi single mother of three, has not forgotten. The violence and chaos that engulfed Iraq following the U.S.-led invasion of 2003 had tragic consequences for her family and ultimately forced her to flee her homeland for an uncertain future. She has left Iraq, but she is determined to make sure the world hears her story and that someone is held accountable.

Saleh is the lead plaintiff in a class action lawsuit targeting six key members of the Bush Administration: George W. Bush, Richard Cheney, Donald Rumsfeld, Condoleezza Rice, Colin Powell, and Paul Wolfowitz. In Saleh v. Bush, she alleges that the Iraq War was not conducted in self-defense, did not have the appropriate authorization by the United Nations, and therefore constituted a “crime of aggression” under international law—a designation first set down in the Nuremberg Trials after World War II. The aim of the suit is simple: to achieve justice for Iraqis, and to show that no one, not even the president of the United States, is above the law.

The case is being brought to trial by Inder Comar of Comar Law, a firm based in San Francisco. The majority of cases Comar takes involve providing legal support to private companies, primarily for the tech industry. He is measured and deliberate, perhaps not the long haired, vaguely out-of-touch wearer of hemp suits some might picture when imagining a human rights lawyer pushing for prosecution of U.S. government officials.

This summer, Saleh met with Comar at her home in Amman, Jordan, to discuss the upcoming trial.

Saleh related her story through a translator to Comar, who had traveled halfway around the world to hear her story firsthand. Saleh was a gracious host, according to Comar, pointing out the paintings she’d crafted and beaming over her children. She was warm, open, and quick to laugh. Her story, however, was rife with darkness.

Prior to the arrival of U.S. forces, Saleh said, Iraq was safe. People slept with their doors open at night. There were no militias, no checkpoints, no threats. All of that came to a halt following the U.S.-led invasion. Airstrikes damaged or destroyed vital infrastructure including highways, bridges, and wastewater treatment facilities. Diseases like typhus became commonplace. The swift collapse of a functioning government created an environment ripe for internecine warfare. She no longer felt safe in her own home. So in 2005, Saleh fled Iraq. She was not alone. According to the United Nations High Commissioner for Refugees, over 2 million people left the country, and over 2.7 million were internally displaced, including up to 40 percent of the Iraqi middle class.

To seek legal redress, Comar Law is invoking the Alien Tort Statute, a law passed in 1789 that permits a non-U.S. national the ability to sue in federal court for injuries “committed in violation of the law of nations or a treaty of the United States.” The case was filed on March 13, 2013, with the U.S. District Court in Northern Calif., and the defendants have all been served notice to appear. Just like any other legal proceeding, there will be a great deal of back and forth before the hearing, which is scheduled to take place sometime in early 2014.

A tough case to make

Paul Stephan teaches law at the University of Virginia and has served as a consultant to the Department of State on matters of international law. In his opinion, Comar’s lawsuit against Bush administration officials is unlikely to succeed.

Many judges would view the ramifications of the invasion of Iraq not as a matter of law, but of politics.

For one, Stephan says, it’s difficult to sue a U.S. employee acting under the “scope of employment.” The Westfall Act of 1988 permits the United States as an entity to substitute itself in for individuals who were acting in their “scope of employment” for the case at issue.

The Westfall Act was enacted by Congress to supersede the Supreme Court’s decision in Westfall v. Erwin, a case involving a government employee, William Erwin, who was burned by exposure to toxic soda ash at an Army depot and then sued the depot supervisors. The Court’s ruling slightly modified the interpretation of law to open up government employees to greater legal liability for their actions. Congress immediately responded with the Westfall Act, which granted “absolute immunity” to government employees for any actions taken within the scope of their employment.

Precedent suggests that Stephan may be right. The district court of the District of Columbia dismissed a case by the ACLU of Northern California against Defense Secretary Donald Rumsfeld and nine other senior military leaders in 2007 on the grounds that these employees were acting within the scope of their employment and were therefore immune from liability under the Westfall Act.

The suit, Ali v. Rumsfeld, was brought on behalf of nine men subjected to torture and abuse under Rumsfeld’s command, with the ACLU arguing that the Constitution and international law prohibit torture and require commanding officers to report violations of the law. The ACLU further claimed that direct orders from Rumsfeld, as well as reports from detention facilities in Iraq and Afghanistan, proved that Rumsfeld and the nine other defendants were well aware of and condoned the ongoing torture.

The second issue that Stephan points out is that the crimes in question didn’t take place in the United States. That makes it unlikely the courts will recognize the validity of the claim.

Thirdly, there’s the “political question.” Courts aren’t open to ruling on matters of a political nature, Stephan says. This doctrine of U.S. Constitutional law has its roots in the case of Marbury v. Madison, in which Supreme Court Chief Justice John Marshall drew a dividing line between matters over which the courts would have jurisdiction and matters best left to the legislative and executive branches of government. Many judges would view the ramifications of the invasion of Iraq not as a matter of law, but of politics.

“If the expectation is that a federal court will declare that the invasion, although duly authorized by Congress, violated international law and thus violates U.S. law, I would respond that we walked up and down that hill with respect to Vietnam,” Stephan said. “No federal court ever has recognized such a claim.”

But Comar is optimistic that these hurdles can be overcome. The issue of whether or not Bush, Cheney, and the others will be found to have acted in an official capacity isn’t open and shut.

“Ms. Saleh alleges that these defendants entered into government in order to execute a pre-existing plan to overthrow the Hussein regime.”

According to Comar, part of the planning for the invasion happened within the United States, before these officials took office. Multiple letters and position papers emanating from the nonprofit think tank Project for a New American Century, or PNAC, indicate a long-term interest in regime change in Iraq. An open letter written in 1998 to then-president Clinton signed by Wolfowitz and Rumsfeld called for the removal of Saddam Hussein using military power. PNAC was also responsible for drafting and guiding the passage of the Iraqi Liberation Act in 1998, which authorized military support for opposition to Saddam Hussein.

Then, in 2000, Wolfowitz was a signatory to the 90-page report issued by PNAC titled “Rebuilding America’s Defenses: Strategies, Forces, and Resources For a New Century,” which calls for, among other things, global domination through force of arms. The document tellingly hints at the larger geopolitical justification for war with Iraq, stating that “while the unresolved conflict in Iraq provides the immediate justification [for U.S. military presence], the need for a substantial American force presence in the [Persian] Gulf transcends the issue of the regime of Saddam Hussein.”

Those documents suggest that, in order to show that these officials were acting in capacity as government employees, the United States needs to prove that the sum of their actions took place entirely within office. Since the officials participated in these actions before they took office, Comar claims, they clearly cannot have been acting in their scope of employment.

Though low-ranking soldiers were prosecuted for torture in Iraq, none of the policy architects were ever held accountable.

Comar is confident that the courts will hear the case but is clear-headed about the prospects for conviction. He says that failure to achieve a multimillion-dollar settlement would not mean failure overall. A trial requires the gathering of evidence and provides a record for posterity.

Furthermore, Comar says, the judiciary is likely the last place people like Sundus Shaker Saleh can turn. It is highly unlikely that any president would ever investigate a past administration in the way sought by the suit, since the executive isn’t keen to open the gates for further scrutiny into its actions. Indeed, the Obama administration has expanded many Bush programs, including the use of drone strikes and domestic surveillance.

Since neither the legislative nor the executive branch have attempted to investigate whether the Bush Administration officials are guilty of war crimes, the last remaining branch through which to seek redress is the judiciary. Pursuing the issue here, Comar believes, will force the issue back into the public sphere.

“Our law recognizes that the actions of every person in this country—even a president—is subject to judicial review before an impartial judge,” Comar says. He continues:

This is a concept that extends back to the Magna Carta, when English barons put restraints on their king in order to protect their rights and privileges. In this case, Ms. Saleh alleges that these defendants entered into government in order to execute a pre-existing plan to overthrow the Hussein regime—a plan that has now led to the deaths of hundreds of thousands of Iraqis and U.S. servicemen and women, untold misery for millions, and chaos that continues to plague that country to the present day. This is the very behavior that was outlawed and declared criminal by the Nuremberg Tribunal.

It is unusual in the United States for high government officials to face legal consequences for their actions. Though low-ranking soldiers were prosecuted for torture in Iraq, none of the policy architects were ever held accountable.

Regardless of the resolution of Saleh v. Bush, the case sets an important precedent toward rebuilding a system of laws that apply equally to everyone, even if their alleged crimes were committed in the Oval Office.

Editor’s note: This article originally suggested that Ms. Saleh had twin brother who had been shot during the war in Iraq. She has no twin brothers and the text has been corrected.