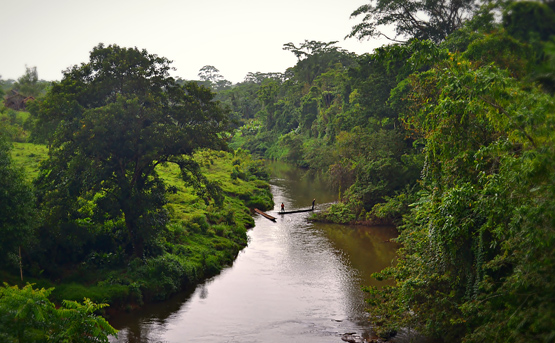 A forest managed by the Mayangna people in Nicaragua. Photo by Alam Ramírez Zelaya / Flickr.

The study highlights the story of Brazil, where increasing indigenous rights to the rainforest helped cut carbon emissions by 3.2 billion tons.
By David Kaimowitz
4 MIN READ

The first time I heard about Charlie Taylor was the day he died. A friend rang to say that ranchers had attacked a group of Mayangna Indians in a forest near Musawas in Nicaragua, killing one of the Indians and injuring several others. Charlie—a 40-year old father of seven who farmed locally and panned for gold in nearby rivers—was the one who died.

On April 23, 2013, Charlie was part of a group of villagers who went to investigate after hearing that ranchers were chopping down forests to clear land for pasture, in territory managed by the Mayangna. It turned out to be true: When Charlie confronted the intruders and asked what they were doing on his peoples’ land, they started shooting. Charlie was hit and died a few hours later.

Charlie Taylor, A Death in the Forest from Handcrafted Films on Vimeo.

Since Charlie’s death, I have thought a lot about him and talked to people who knew him. What made him risk his life to defend the forest? What could I possibly say to his destitute widow, Ricalina Devis? Why are so many indigenous and community leaders being killed protecting rainforests? And how might I explain the urgency of this situation to urban friends and colleagues, who live in heated homes with running water, whose food and drugs come from stores? What do they have in common with the many millions of people who still depend directly on nature for sustenance, fuel, and medicine?

The world needs traditional communities to help stave off global warming by protecting their lands.

The answer to that last question is simpler than it might seem. Deforestation is a major cause of global warming, and so we all have a stake in helping these communities defend their resources from wealthy ranchers, loggers, miners, farmers, and drug traffickers.

No matter how different our lives look in far-apart places, climate change affects us all. A new report by the World Resources Institute and the Rights and Resources Initiative offers compelling evidence of this, showing clearly that one of the best ways to slow global warming is to give traditional communities the right to manage the forests where they have lived for generations. It is by far the most comprehensive assessment to date, drawing on 130 previous studies, as well as recent satellite data.

Most media attention on climate change focuses on energy and fossil fuels. But any realistic strategy to curb climate change must also address deforestation. The world’s forests store more carbon than the atmosphere—one recent estimate suggests that, by stopping deforestation and then reforesting, we could reduce global greenhouse gas emissions by 30 percent.

The report, “Securing Rights, Combatting Climate Change,” contrasts Brazil’s recent success protecting forests with Indonesia’s dismal failure. Deforestation in the Brazilian Amazon is only a fraction of what it was 10 years ago, in part because traditional communities now have secure rights to about one quarter of the forest. This has allowed Brazil to reduce its emissions by 3.2 billion tons of carbon dioxide—more than three times the amount emitted by all the cars in the United States in a year.

Meanwhile, Indonesia has been slow to recognize community rights, allowing large companies to move in and destroy huge areas. While Brazil has become a climate leader, Indonesia is among the worst offenders.

The communities need support to defend their territories, cultures, and livelihoods from those who seek to profit from the land.

Brazil is not an isolated case: In other countries where governments have mapped, demarcated, and titled community forests, helped communities stop encroachment, and provided traditional communities with funds and training, the results have been remarkable. Guatemala’s community forest concessions have much less deforestation than nearby national parks. The woodlands of Nepal and Niger regenerated after communities gained greater control. Bolivian indigenous territories with titles have only a fraction of the forest loss of other Amazon forests. Tanzania’s villagers manage their forests better than the national government.

Even in places like Nicaragua, where pressure for land is quite intense and sometimes violent, the Mayangna Indians have not given up the fight. They are still out patrolling their territory and pushing the government to protect their rights.

Because of the fundamental link between climate and vegetation—globally, a fifth of carbon emissions come from the conversion of forests and peat lands for development or other uses—the world needs traditional communities to help stave off global warming by protecting their lands and managing them sustainably. For that to be possible, the communities need support to defend their territories, cultures, and livelihoods from those who seek to profit from the land—and who destroy it in the process.

At the Ford Foundation, our efforts to strengthen community rights over natural resources and slow the effects of climate change depend on the courage and commitment of people who, like Charlie Taylor, are putting their lives and livelihoods on the line to protect their forests, their lands, and our climate.

From Candido Mezua, who works to get Panama’s government to implement the law guaranteeing Indigenous Peoples’ ownership of forests; to Abdon Nababan, an Indonesian leader pressing for forest rights for more than 40 million indigenous people, to Sophi Tanki, protesting the eviction of her Ogiek peoples from their forest homes in Kenya, the quiet heroism of community leaders is a reminder of the role each of us can play in mitigating or accelerating climate change—and how these local struggles are inextricable from the global picture.