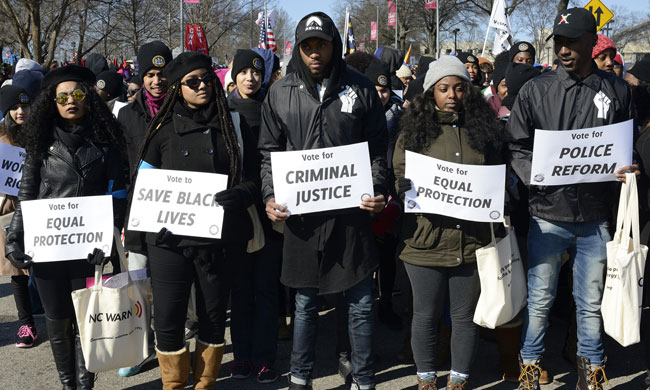 This election will be the first in 50 years not to offer full protections under the Voting Rights Act of 1965. But the Movement for Black Lives is hopeful.
By Liza Bayless
7 MIN READ

This article is the fifth of a series of conversations with contributors to the demands of the Movement for Black Lives.

This election, citizens in 14 states face restrictions on voting that weren’t in place almost four years ago. Due to the the Supreme Court’s ruling in Shelby County v. Holder—which in 2013 removed the requirement that certain states get federal approval for changes to election law—this election will be the first in 50 years that does not have full protections under the Voting Rights Act of 1965, passed to address racial discrimination in voting.

This election will be the first in 50 years that does not have full protections under the Voting Rights Act.

The states that have passed stricter voting laws include the ones that saw the highest African American turnouts in the 2008 election, according to the Brennan Center for Justice, a think tank based at New York University. Six of the top 11 states with the highest turnouts of Black people in 2008 are now facing restrictions that make it more difficult to cast a ballot.

So the goals of better voting access and political representation emerged as central ones when the Movement for Black Lives (M4BL)—a coalition of more than 50 racial justice organizations—released a platform detailing a vision for a more equitable future this August.

Trupania Bonner is co-author of the section of the demand that covers universal voting access, and the founder of Crescent City Media Group, a community advocacy and film production company that works to expand voting rights in Louisiana. Here, he discusses how voting-rights reforms have been successfully implemented in some states and can serve as models going forward.

This interview has been lightly edited.

Liza Bayless: What are the greatest problems with our current voting system, and what makes reform of this system central to the Movement for Black Lives platforms?

Trupania Bonner: One is the intentional voter suppression that’s been happening since the first Black president was elected to office in 2008. Folks utilized the opportunity to take advantage of misinformation and fire folks up in a racist way about this president, and they were able to put a lot of these bills in place and have people vote for them. Then, when Shelby v. Holder happened, it gave those former confederate states the opportunity to redistrict in any way that they’d like.

On the flip side to that, millions of us are not engaging in the electoral process. And part of the reason is because people don’t understand it. So efforts to teach people about the process and about the fact that it’s more than just about the vote—you can actually go on the offensive—is why this M4BL policy table is so important.

Bayless: What do you mean by “go on the offensive”?

Bonner: Going on the offensive can mean proactively committing to drafting new laws and policy. We did that in Louisiana, where 16-year-olds can now pre-register to vote, and college students can now use their IDs to vote. The new laws are unconventional for Louisiana, but came from grassroots policy advocacy efforts. No one told these grassroots advocates to do it. They saw the need and made it happen.

Bayless: The Voting Rights Act passed in 1965 was supposed to make voting more accessible across the board. Why does the county still struggle with low turnout rates?

Bonner: Our education system. We’ve seen civics classes and voter education cut from state and local budgets. Civics was at one time mandatory to be in taught in schools. A good question for a legislator is why it’s no longer a priority. It should be taught because a more informed electorate is a more engaged electorate. If average folks are not engaged en masse, it’s impossible for this system of governance to function as a balanced, fair, and just system. There was an opportunity for folks to have a better understanding about how government functions, but it’s just not a priority—not even from the people, in terms of pushing to have voter education funded and civics reinstated in schools.

No one knows why those budgets have been cut. But it also creates an amazing opportunity to step in and teach folks about the process so we can ramp up voters’ involvement and performance.

Bayless: Some states have already have automatic and same-day voter registration. Why haven’t all states adopted these systems?

Bonner: Part of it is a dual mindset of this country. On the one hand, you have a group of folks who believe it’s your responsibility to learn about your rights. On the other, it should be the mission of our nation to have everyone understand the electoral process. The big deal about AVR in particular is it takes the onus off the person. Whenever you apply for a state driver’s license or a state ID, you’d be registered to vote.

Some states are concerned about undocumented folks voting. AVR has a better defense against noncitizen voting than online registration at the moment—which many of the states in the U.S. have—so that’s part of the pitch on AVR.

And for same-day registration, it just makes sense. We have so many folks who don’t have the time to register on their own. Elections roll around and everybody makes time to vote because of the fanfare, and all of this mobilization happens. So it would be a big deal to have same-day registration for all the folks who were sort of bundled down in their lives.

This stuff should come with citizenship: the opportunity to be automatically registered, to register on the same day you vote, and to pre-register if you’re a 16-year-old.

Bayless: What differences would we start to see with some of these reforms implemented?

Bonner: These types of reforms are organized and created by the people and for the people. And so I believe that as more people are engaged—especially young people, like those who are involved in the M4BL policy table—we’ll see a number of our young leaders at some point run for office. I tell even my anarchist buddies, who don’t believe in these systems, that unless we engage it, we’ll always be subject to it.

So civic engagement won’t make everything better, but it certainly can help. They draft stand-your-ground bills; what can we draft to counter it? That’s sort of the thinking. And in order for those bills to move, we need people who look like us—but, more importantly, think like us—to make these reforms happen.

Bayless: How successful have efforts to restore rights to incarcerated and previously incarcerated individuals been?

Bonner: It just depends on state governors. Several years ago, Florida’s governor began restoring voting rights to ex-felons, and then when Gov. Rick Scott came in, he reversed those actions. So it just depends on who’s representing us, and it’s just going to be critical that at some point some of the folks who sit around these tables and dream up these policy agendas actually run for office.

In states like Louisiana, where felons can have their rights restored after they’re “off the papers”—meaning they’ve completed parole or probation—the problem is educating folks about the process. A lot of them don’t know that they actually can have their rights restored. Also, you have a lot of folks who are incarcerated and haven’t been charged, so the rights actually haven’t been taken away from them. I know in my state in particular, folks who are inside of prisons and the local jails can still be registered to vote, and if you can register, then you can cast a ballot. The problem is that you’ll rarely see in America a polling place inside of a jail (Editor’s note: Only Maine and Vermont allow felons to vote from within prison). It makes total sense to have a ballot machine inside of a prison because a number of inmates have the potential to vote. This should be a norm.

Bayless: Are we close to countrywide implementation of the voting rights reforms demanded by the M4BL? By next election cycle, should we expect to see great change in who is casting ballots?

Bonner: I believe so. I think these efforts are not going to end simply because there will be a different president. Certainly we’re trying for automatic voter registration again in Louisiana. I know Illinois will try again. New Jersey will try again. Vermont and Connecticut have begun their implementation processes, and Oregon and California too in January of this year. Their bills passed last year, and those efforts are going quite well.

A policy is a universal language of change in a democracy.

Another hopeful aspect is that the M4BL policy table is led by millennials. I’m technically Generation X, myself, but so excited to see that the majority of the folks involved in the policy table are young adults and have the great energy to keep the work going and building.

As strong and as powerful as the Voting Rights Act was, the basis of it came from conversations like the one M4BL is having. The VRA changed things in this country and created opportunities not only for African Americans and minorities, but for other groups, too. We forget that political power in this country only existed for a few White males from England. So if you were Irish, Italian, Jewish, from any ethnicity, culture, or group, you benefited from the efforts of abolitionists and former slaves in this country.

Historically, policy change has been a true catalyst for change in the U.S., including bringing about the end of colonial slavery as we knew it. Whether it’s the 13th through 15th amendments added to the Constitution in the late 1800s or laws written to expand the rights of women and minorities, policy change and drafting laws are the great equalizers for the average citizen, minority or not. A policy is a universal language of change in a democracy, and the M4BL policy table is one of the few proactive efforts to restore rights and to create new opportunities for rights.

Divest From Prisons, Invest in People—What Justice for Black Lives Really Looks Like

How to Make City Budgets Racially Just? Let Citizens Do the Numbers