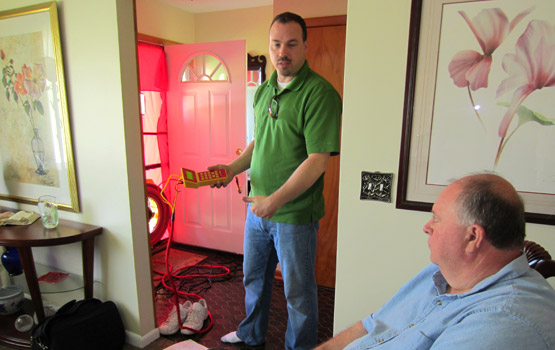 Chris Woolery, a residential energy specialist for How$mart, explains a test of energy efficiency to Larry Watson of Flemingsburg, Ky. Photo by MACED.

Having an energy-efficient home saves the owners money, but they often procrastinate on improvements. When energy companies in Kansas and Kentucky figured out a way to sweeten the deal, the results brought good news for homeowners, contractors, and for the planet.
By Erin L. McCoy
6 MIN READ

Jamie Blair had owned his own business for about seven years when he started to think it was missing a crucial piece. He was installing heating, ventilation, and air conditioning systems in and around Paintsville, Ky., but heated air isn’t much good if it leaks out through poorly sealed doors or underinsulated attics. That was right around the time he discovered How$martKY, a collaborative program designed to encourage better energy efficiency in Kentucky homes.

“Ten years ago, you never really thought about it,” Blair explained. “You went in and put the unit in, and you didn’t care how tight the house was or how well it was insulated.”

The Kentucky pilot works with 17 contractors, but Kansas works with hundreds—all of them now advocates for energy efficiency.

But all that is beginning to change. In 2011, Blair and his employees joined up with How$mart for hands-on training, learning how to perform energy audits and install higher-efficiency insulation. The homes where this training took place belonged to customers of four local energy cooperatives, which had partnered with How$mart.

“Now we feel pretty comfortable that we can come in and do a full-service retrofit,” Blair said.

Operated by the Eastern Kentucky-based Mountain Association for Community Economic Development (MACED), which seeks “economic alternatives” to “to make Appalachian communities better places to live,” How$mart collaborates with homeowners, energy co-ops, and contractors to make local houses more energy-efficient. The houses get better insulation, HVAC, heat pumps, sealing—or all of the above—and the homeowners pay for everything on their utility bills, so there’s relatively little paperwork. The program not only helps the homeowner save money on every bill, but also creates an economic ripple effect by training contractors and cutting expenses for energy companies.

The potential environmental impact is profound. The pilot program has cut energy usage by an average of 20 percent in How$mart homes. That amounts to an annual projected savings of 552,829 kWh—equivalent to 390 metric tons of climate-warming carbon dioxide. It’s more energy than the entire country of Vietnam saved during Earth Hour 2010, when 20 cities and provinces turned off their lights for an hour—an impressive feat for just 108 Kentucky homes.

The program hasn’t just cut carbon emissions—it’s also spurred small-business growth. Since starting with How$mart, Blair has hired three new people to keep up with the extra work. His company now conducts energy audits with customers whether they’re with How$mart or not. And in the next few months, he plans to expand his business to include insulation and add on another three men.

East Kentucky Power Cooperative (EKPC) first approached MACED with what might seem like an unlikely problem for an energy generator: Its customers were using too much power. As a result, EKPC had to purchase power from other providers, which was hurting its bottom line.

As it happened, MACED was already exploring ways of making energy efficiency more appealing to people in Appalachia. That’s how How$martKY was born.

In two years of cooperation with four energy co-ops powered by EKPC, How$martKY has created five to 10 jobs for local contracting companies and saved customers almost $61,000, according to program coordinator Bill Blair.

The process starts when a homeowner asks his or her energy co-op for an efficiency audit. How$mart or a co-op staffer conducts the audit, though local contractors like Jamie Blair join in to learn the ropes. If the homeowner qualifies for the program, the contractor sets about repairing or replacing anything that is driving up the bill—whether it’s insufficient attic insulation or an oversized furnace. Finally, How$mart checks the quality of the contractor’s work. The contractor is welcome to come along during these inspections, but either way, he’s responsible for fixing any problems. It’s a part of the education process, Bill Blair explained—a way for contractors to learn from their mistakes.

Homeowners pay for their retrofitting in installments on their monthly bill. The average monthly installment comes out to just under $40, but homeowners save about $50 a month on average. In fact, How$mart won’t take on a project unless it’s sure the homeowner will save money each and every month.

Blair doesn’t like to call that financing a loan, perhaps because it makes it sound riskier for co-ops than it is. After all, customers pay back installments at 3 percent interest like any other loan—but unlike most loans, customers end up with more money in their pockets and fewer reasons to skip payments.

“I’ve always been looking for ways to help the homeowner to be able to afford spray foam insulation by looking for tax credits and rebates,” Smith said, “and that’s how I found MACED.”

Experienced contractors like Smith appreciate How$martKY because it offers third-party validation of their work and the chance to spark word-of-mouth interest. But for those contractors seeking more extensive training, How$martKY’s namesake program in Kansas offers continuing education credits and a set of standards for HVAC size. The Kentucky pilot works with 17 contractors, but Kansas works with hundreds—all of them now advocates for energy efficiency.

When Barb and Steve Ritchie signed up with How$mart to install a new furnace and insulation in their house in Ewing, Ky., the bill came to nearly $14,000.

It’s a daunting number. But a Kentucky Home Performance rebate helped, and their monthly bill is lower than it was before.

The results were striking: In 2011, the Ritchies used 28,406 kWh of energy. In 2012, that number dropped to 14,651 kWh. Barb Ritchie estimates they’re saving $400 a month now that they no longer have gas delivered for heating—not to mention the savings on their bill.

“I just feel like I was very blessed,” she said. “This is the warmest and coolest our house has ever been.”

Mr. and Mrs. Purdon of Maysville Ky. are How$mart customers. Photo by MACED.

“Most of the time they’re not going to say, ‘I’m saving a lot of money,’” Blair explained. “They say, ‘I’m actually comfortable in my house.’”

Customer satisfaction is a powerful incentive for utilities to take on programs like How$mart, Blair added. And Mike Volker, director of regulatory and energy services at Midwest Energy, Inc., in Kansas, has the numbers to prove it.

Midwest Energy took its inspiration for the original How$mart program from Pay As You Save, a plan developed by the Vermont-based Energy Efficiency Institute. After making a few tweaks, How$mart Kansas became the first utility in the world to implement the concept comprehensively, starting in 2007 with a four-county pilot.

Since then, Midwest Energy saw customer satisfaction among How$mart participants soar to 97 percent. Compare that to the 85 percent customer-satisfaction rate the company observes overall, and you can see why the program has expanded to 41 counties covering most of western Kansas.

In Kansas, the original How$mart program now saves more than 1.9 million kWh of electricity and 234,000 therms of gas per year. Over 20 years, the reduction could amount to nearly 50,000 tons of CO2. Midwest Energy has invested $5 million in How$mart, but the program has also disproved the notion that green-friendly projects must be a financial drain.

A 2009 report estimates the U.S. could cut energy consumption 23 percent by 2020 by implementing efficiency measures alone.

In fact, How$mart consistently breaks even and could do even better. Midwest Energy doesn’t turn a profit on the program because its funding options are designed to be accessible to a wider demographic, including low-income households. But according to Volker, it has the potential to be just as profitable as regular utility service.

That profitability is possible in large part because efficiency measures beat out renewables for cost-efficiency hands-down. A 2009 report from consulting firm McKinsey & Company estimates the U.S. could cut energy consumption 23 percent by 2020 by implementing efficiency measures alone. Another study estimated that while wind power costs $38 per ton of CO2 saved, replacing incandescent lights with LEDs saves $159 per ton.

That means any utility, co-op or not, could find a program like How$mart beneficial, Volker said.

Similar programs have already sprung up in Georgia and South Carolina. And when MACED launched How$martKY, Volker was there to help.

How Renewable Energy Is Rescuing Schools from Budget Cuts
Educators across the country are finding millions of dollars in savings through cheap and simple forms of renewable energy.

“Doing energy efficiency is a lot less sexy, shall we say, compared to putting in some shiny black photovoltaics or a wind turbine,” Volker says. “But very few people would disagree with me when I say the most cost-effective kilowatt hour is the one you never use.”

MACED and three of its partner co-ops have applied for a tariff with the Kentucky Public Service Commission to transform How$mart from a pilot to a permanent program.

“We’re hoping to add four or five new co-ops this year,” Blair said. “Our goal really is to see every electric provider in the state pick it up.”

For contractors like Jamie Blair and customers like Barb Ritchie, environmental benefits are just an added bonus. Better lives and livelihoods are the everyday results they see — and that might just be enough to inspire grassroots efforts that help reign in carbon emissions on a nationwide scale.

COP21: How to Ramp Down Fossil Fuels Fast—Without Leaving People Behind