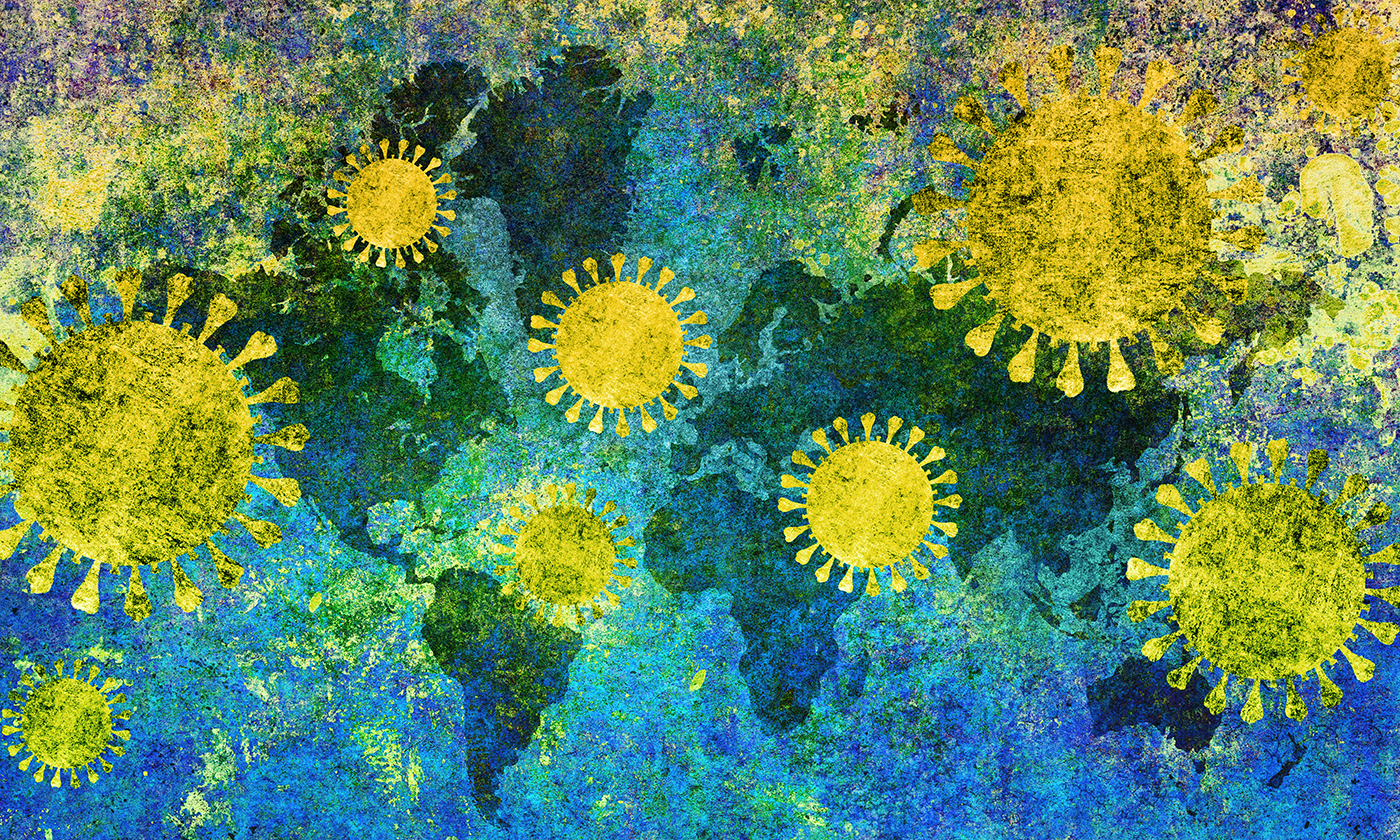 As COVID-19 continues its deadly sweep across the world map, Canada stands out. The country has markedly fewer cases than, for example, the U.S. As of April 8, Canada had 18,000 cases to the United States’ 403,000. Despite the difference in response and scale, the virus is a major disruption to Canadians and their economy. And disruptions, as historic examples reinforce, create opportunities for positive change.

Courtney Howard is an emergency doctor in Yellowknife, Canada. She serves a patient population that, so far, has only seen one case of COVID-19 but is living in one of the most rapidly warming climates in the world. Howard’s emergency department serves the entire high arctic in Canada’s Northwest Territories, including many Indigenous and frontline communities experiencing climate change firsthand. This has huge consequences for health, including food security, cultural sharing, and mental health. She sees the response to coronavirus and the resulting investments as the perfect opportunity to address both new and long-standing threats to health.

The Canadian government, for example, has announced plans to fund the cleanup of abandoned oil and gas wells, which are a toxic risk to communities and would employ oil and gas workers who have been laid off. Such actions, Howard underscores, must support people’s health now, improve resilience to crises that may happen in the future, and decrease the risk of those crises occurring.

Here she shares her experiences from the COVID-19 crisis and insights on how the outcomes can and should inform conversations on climate. Howard says prioritizing mental health is key to tackling both of these tough issues, which is why she conducted this interview while cross-country skiing.

This interview has been edited for clarity and length.

Breanna Draxler: How does being an emergency doctor influence your response to crises?

Courtney Howard: I have gut-level reflexes around the need to act quickly in the case of fast-moving illness. I’ve had really discreet experiences of both having acted quickly enough and saved the patient, and having acted in a way that later I went back and said, “That patient died. Could I have done something differently? Could I have been faster? Could I have called in help earlier?” Those are by far the most difficult experiences of any doctor’s career. They’re the ones you remember in the pit of your stomach and keep you awake at night. And so eventually, you end up with an almost Pavlovian response to a time window.

Half of the doctors on my board right now, of the Canadian Association of Physicians for the Environment, are emergency doctors, and I think it’s because we really can’t sit still if we see that lives are at risk and it’s a time-dependent situation. And so, the need to act quickly within time windows and situations where the factors are outside of your control has been shown to be super key in COVID and it’s equally true in climate.

Draxler: How so? Can you speak to how climate is going to exacerbate future crises and make them more frequent?

Howard: I was thinking today, imagine if the Australian wildfires had happened a couple of months later. Or this pandemic had started a couple of months earlier to coincide with the Australian wildfire season. We could have had two incredible crises at the same time. That could easily happen, so we need to look at these increasing weather-related disasters, wildfire-related disasters, and the increasing possibility of further infectious disease related pandemics.

Draxler: Can you talk more about the commonalities that the coronavirus has revealed?

Howard: It’s an event that at first seems unrelated to climate, but it has a lot of consequences for the conversation around climate and health.

I have gotten involved quite early in a movement called “planetary health,” which is the health of human civilization and the state of the natural systems upon which it depends. It turns out that only about 20% of overall health status comes from the work we do inside health structures. What determines the rest are ecological determinants of health—things like soil, climate, water, biodiversity. You can think of those as a nest underpinning everything else, because that has to be stable for us to have the concentrated resources we need to be able to do things like build roads and hospitals and schools and homes. Those financial and economic systems give rise to what we term the social determinants of health, which are things like housing and income and education. Those have direct impacts on our health, and they also are the things we need to have functioning health care structures.

The whole coronavirus outbreak is a giant wake-up call in terms of planetary health, because what it’s saying is, “Hey, there’s a lack of care at the intersection of humans and the natural world, and that’s what allowed a zoonotic virus to make a jump into humans.”

Draxler: What about mental health; what is the impact there?

Howard: Before this started, I was doing a lot of work around eco-anxiety and ecological grief, so heading into this, a lot of people are really, really worried and grieving the changes that we’re anticipating and already seeing in the natural world.

From what I’m seeing online, and also what I’m seeing in the emergency department, people are really anxious right now, too. This is a time when the COVID crisis is demanding a lot of us in terms of buffering different worries and stresses and changes. We’re going to emerge from this really tired, and some of us will be traumatized, and some of us will be grieving. We’re going to look up and realize that “Oh, phew. Now we’re through that crisis, but the other crises didn’t go away.”

That’s the reality: Sometimes there are two emergencies happening at the same time, or more than two, and you have to deal with them both at the same time. Now, I think we are appropriately focusing most of our energy on this problem that needs us the most, but those other emergencies are in the background. And we need to realize that when we lift our eyes up from the COVID emergency, we’re going to be tired and we’re going to hope that those other emergencies are as optimized as possible.

Draxler: What do you mean by optimized?

What I think is super important right now is making sure that the stimulus funds are going toward the things that both increase our resilience to future disasters and that make them less likely.

Draxler: How do we make sure that happens?

Howard: The book I’m reading right now is Joseph E. Stiglitz’s People, Power, and Profits. What he points out, with regards to the U.S. system, is that a concentration of wealth inevitably results in a concentration of political power. Power comes up every once in a while, as a word, but the concept of inequality and the different ways that that impacts our health in a really dangerous way is something that I think we need to talk more about, because, especially looking at the U.S. context right now, it’s really hampered the pandemic response.

The thing is, a pandemic is something that shows that we’re all in it together. So if people can’t access health care and they can’t get tested, not only are poor people affected, but rich people too. There are all sorts of studies that show that inequality is bad for everybody’s health, not just the people at the bottom, but the whole society. One of the ways that is becoming clear is in terms of access to political power and decision-making power. We need to start talking more explicitly about that, because that will bring us closer to solving the problem.

Howard: Things like phasing out coal-fired power plants, that’s a win-win. We transition from coal to healthier energy supplies, and it reduces air pollution, which the World Health Organization has calculated is killing 7 million people a year. Compared to how many people have died of COVID so far, it’s a lot.

What we really need to focus on is this: We’ve been working with this “your house is on fire” narrative as a climate community for a couple years. I think that was appropriate for a time when people weren’t in crisis. But coming out of this [COVID crisis], people are not going to have the energy to talk about that. If we describe a path of safety in a compassionate and inclusive way, we can really make a huge contribution.

Draxler: That is such a different visual than your house being on fire.

Howard: Yeah, totally. When people were complacent, I think that probably was appropriate. But right now, in the emergency department, I’m seeing stress-related headaches, stress-related stomachaches, stress-related neurological disorders. I’m seeing physical trauma, suicidality. And we’re only, what, a month in? We only have one case so far in the Northwest Territories, so that’s just the result of people being at home and worried.

Part of what I would invite people to do is to be really, really diligent about self-care practices right now, because if we bring a centered self to the table at this moment of incredible change, we’re going to be able to make decisions strategically, as opposed to out of emotion, and that’s going to help get the outcome that we’re hoping for.

Essentially, we’re in a generational tipping point. Things have been disrupted, so now we have this opportunity: How can we apply the lessons that we’ve learned to saving lives this century and into the next?

This article was updated on April 14, 2020, to reflect the World Health Organization’s estimate that air pollution kills 7 million people a year.