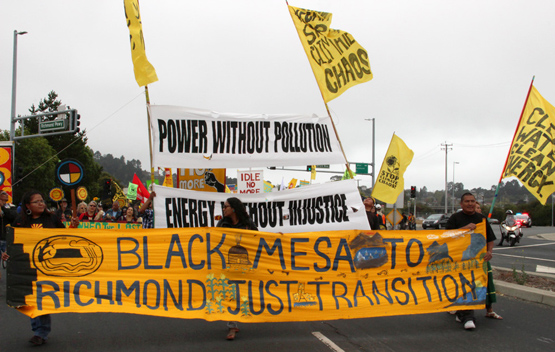 Demonstrators in Richmond, Calif., hold signs demanding both "power without pollution" and "energy without injustice." Photo by Peg Hunter / Flickr.

This article is presented as part of New Economy Week, five days of conversation around building an economy that works for everyone. Today’s theme is “Combating Climate Change Without Leaving Anyone Behind.”

We are heading toward a potentially severe clash between environmentalists who advocate for reducing carbon emissions and community and labor activists who are most concerned about jobs, racial equity, and reducing wealth inequality.

Our urgency about the climate catastrophe does not trump equity concerns.

Both the climate crisis and the wealth gap are deepening—and both will require aggressive social movements. We can either pull together to work toward a systematic “just transition”—a transition, that is, that satisfies both groups—or we can be pitted against each other by corporate interests.

I spent the summer interviewing labor, environmental and community justice activists and thinkers about the rift for a lengthy article on this topic in The American Prospect. Many of them invoked the late labor leader Tony Mazzocchi—described by biographer Les Leopold as “the Rachel Carson of the American workplace.” Mazzocchi believed that, for the environmental movement to succeed, it must advocate for a “just transition” for workers displaced by environmental protections. That transition would offer benefits far beyond the pitiful job retraining programs included in trade agreements like NAFTA. Happily this concept of a just transition has been embraced and further developed by many in the climate justice movement. The Climate Justice Alliance has pointed to places like Richmond, Calif., home of Chevron refineries, the coalfields of Kentucky, and the Black Mesa reservation in Arizona, as having been exploited by the fossil fuel industry. They are pressing for just transition policies at the community and national level.

“Fear keeps U.S. working people from looking to the future.”

The question of a just transition extends beyond U.S. borders, and is further along across the Atlantic. In England, the debate over growth is more part of the political discourse and Labor Party Leader Ed Milliband was spotted reading Tim Jackson’s Prosperity Without Growth. In France, a “degrowth movement” has pressed lawmakers to pursue a “power down” agenda—in other words, policies that reduce our society’s thirst for energy, such as incentives for improved insulation. In Germany, the labor movement is a full partner in the transition to decentralized and renewable energy, especially in the country’s post-Fukishima rejection of nuclear power. This is in part because workers in Germany already have a strong social safety net. So if they lose their jobs during the transition away from fossil fuels, they will not lose their income, homes, or basic security. As Joe Uehlein, co-founder of the Labor Network for Sustainability, has said, “Fear keeps U.S. working people from looking to the future.” Those of us in the climate justice movement have to appreciate that our urgency about this catastrophe does not trump equity concerns. If we really want to fix the environment, then we need to join coalitions with organizations that focus on changing our economic system too. The environmental movement must become a new economy movement that advocates for full employment, a just transition for workers, and job-boosting public investment in education, infrastructure, and research.

Parenting During Coronavirus: Opportunities to Reconnect and Decolonize

White Supremacy Has Always Been Terrorism

A Turning Point for the Global Economy