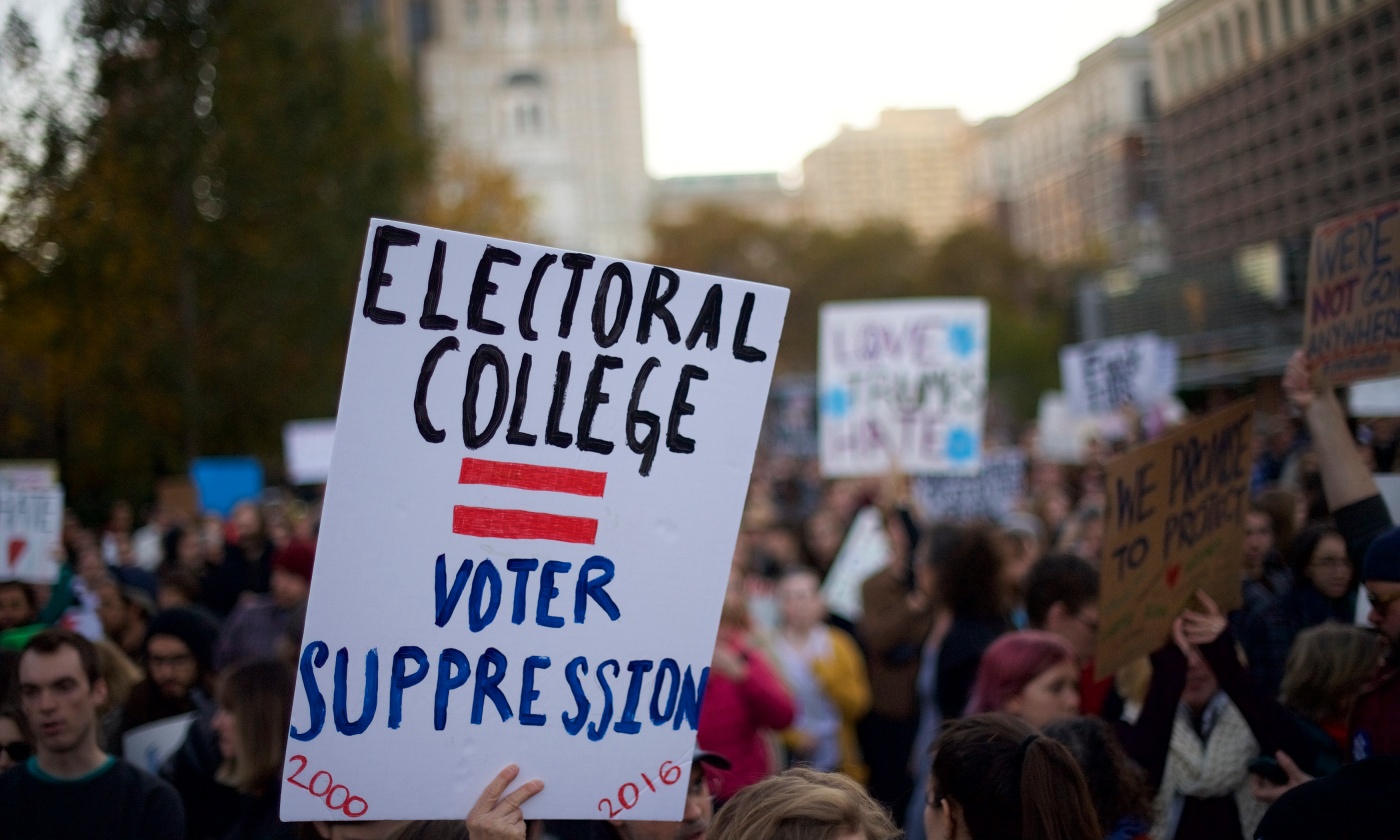 Protesters in Philadelphia after the 2016 presidential election dispute the results. Donald Trump lost the popular vote by more than a million votes, but won the electoral college.

Immediately after the 2016 presidential election, many liberal circles were buzzing about how to prevent Donald Trump from taking office, especially after evidence of Russian interference emerged and after Trump continued to demonstrate his temperament and complete lack of qualification and preparation for the job.

Maybe the Electoral College would go rogue and vote for Hillary Clinton? Maybe Chief Justice John Roberts would refuse to swear him in? Maybe the Supreme Court could nullify the election after evidence came to light of Russian interference?

We all saw how that went. But the frenzied search for ways to inaugurate the candidate who actually won the most votes does speak to the fact that we’ve now had two presidential elections in the past 20 years in which the candidate who won fewer votes was nonetheless elected president, thanks to the way the Electoral College operates in determining who takes office.

The Electoral College is embedded in the Constitution, specifically in Article Two, the same part that establishes that the executive branch of government is led by a president. The only way to eliminate the Electoral College and officially change to a system that ensures the president is popularly elected would be to amend the Constitution. That’s difficult enough during the best of times and nearly impossible in today’s highly partisan environment. (And Republicans would see such a move as an attempt to reduce their power—which it is, these days.)

But what if we just rendered the Electoral College moot?

That’s the gist of the National Popular Vote movement, an initiative that would essentially be an end run around the Electoral College without actually removing it from the Constitution.

There are several problems with the Electoral College, but the key one is in how states award their electoral votes after a presidential election. In 48 states and the District of Columbia, the states use a winner-take-all system, wherein whichever candidate who wins the popular majority in that state receives all the electoral votes from that state. The exceptions are Nebraska and Maine, which award electoral votes to the popular vote winner in each congressional district, then give the remaining two votes to the overall winner for that state.

That’s led to five instances since the nation’s founding in which a candidate lost the popular vote only to have the Electoral College propel them into the presidency. In 2016, Donald Trump lost the popular vote to Hillary Clinton by 2.9 million votes. But he narrowly won the 46 electoral votes in Wisconsin, Michigan, and Pennsylvania by a combined total of 77,744 votes, propelling him to a 304-227 electoral victory.

The winner-take-all system in place also ensures that third-party candidates will never be seen as anything more than spoilers. Case in point: Green Party candidate Jill Stein received more votes in each of those three states than the difference between Trump and Clinton. (Although Libertarian Party candidate Gary Johnson’s margins were even bigger, he’s often not mentioned in the same breath as Stein because his votes were more likely to be seen as detracting from Trump than from Clinton.) And Ralph Nader won nearly 100,000 votes in Florida in 2000, when the final count had George W. Bush beating Al Gore by just 537 votes.

The National Popular Vote is designed to be a check against this kind of electoral numerology. It’s set up as an interstate compact, enacted into law at the state level, and takes effect when the electoral votes of the signatory states compose a majority of the 538 total votes, or 270. When the popular vote winner for the entire country is determined, those signatory states will assign their electors to that winner. Since the states in the compact represent a majority of electoral votes, the national popular vote winner would, by default, be elected president.

There are several problems with the Electoral College.

It’s an idea whose time has come. There have been several attempts over the years to abolish the Electoral College, but this movement, launched in 2006 by a computer scientist and an attorney in California, has gained more traction than past attempts to amend the Constitution.

As of August, 16 states, which account for 196 electoral votes, have enacted the measure into law. Most of those are Democratic-leaning states, but it’s also passed both legislative chambers in Nevada and one chamber in seven more states, some of which tend to be swing votes in national elections, such as Michigan, Minnesota, and North Carolina.

If those eight states were to sign on, the electoral tally would be 271, triggering the compact.

There’s some question as to whether Congress would need to be involved in approving the compact, or if it could stop it. Not all interstate compacts need congressional approval, according to the Supreme Court’s ruling in Virginia v. Tennessee (1893), but given some of the forces arrayed against the movement, there will almost certainly be legal challenges along the way.

But this wouldn’t be the first time that systemic changes were enacted despite the limits of the Constitution. In addition to amending the document, there have been constitutional workarounds through legislation, evolving institutional processes, or Supreme Court decisions that have rendered parts of it moot, or reinterpreted it as something significantly different from what is implied by the words written on 18th-century parchment.

For example, we haven’t really had need to enforce the Third Amendment prohibition of involuntarily quartering soldiers in private homes since the Revolutionary War; our military includes barracks as an integral part of its base construction process. That provision only had one serious challenge in 1982 (Engblom v. Carey), concerning National Guard strikebreakers displacing striking prison guards in employee housing, and it was determined there was no violation of the amendment.

But more contemporarily, it frequently is argued that the rights of gun owners would not be nearly as expansive as they are currently accepted to be if one were just to take the words in the Second Amendment into account, especially the opening clause: “A well-regulated Militia, being necessary to the security of a free State …” Yet court cases have ignored that provision, despite the fact that we have several modern-day equivalents of colonial militias in 54 state and territorial divisions of the National Guard, and State Defense Forces active in 21 states that report solely to those states’ governors. Even the millions of able-bodied adults eligible to be drafted are considered under federal law to be the nation’s “unorganized militia.”

Likewise, political action committees and anonymous unlimited campaign donations didn’t factor into the political conversation in the 18th century the way they do today, let alone the framers having the foresight to write corporate personhood into the Constitution. The framers were worried enough about corruption of the nation’s leaders to write the emoluments clause into Article I, but the Supreme Court’s Citizens United v. FCC decision in 2010 made the de facto buying of congressional votes an integral part of the First Amendment.

As such, the National Popular Vote compact also would get around another problem with the Electoral College system, although a less prominent one: that of anomalous electoral votes to other candidates, or so-called “faithless electors.”

Right now, electors who refuse to cast their ballots for their party’s nominee usually have their votes nullified, and no race’s outcome has ever been affected by the defections. (There would have been more if other states, such as Colorado, didn’t nullify their votes.) In the 2016 election, there were seven of these anomalous votes cast for someone other than the party’s candidate, the most ever, and four of them were in Washington state, as part of a failed attempt to prevent the Electoral College from delivering votes for Trump. Five of the faithless electors were Clinton electors who sought to garner enough Republican electors to vote for a compromise candidate. In the end, just two Republican electors broke ranks.

A recent federal court case out of Colorado ruled that faithless electors can’t have their votes nullified by their states. The U.S. Court of Appeals for the 10th Circuit covers only that state, plus Kansas, Oklahoma, Wyoming, Utah, and New Mexico, none of whose outcomes would have changed on account of the ruling. But the ruling would, for example, possibly allow for a different result if the majority of electors in those states voted for someone other than the winner of the popular vote. A separate court case upheld the fines against the Washington state electors, although those votes were still validated.

States ultimately control how their elections are run, even for the highest office in the country. One fairer system that also preserves the Electoral College would have all states playing by the rules in effect in Nebraska and Maine. The electoral outcome would likely more closely match the popular vote, although some of those congressional districts also suffer from extreme partisan gerrymandering. We wouldn’t necessarily see 537 votes in Florida swinging a national election, but we might see, for example, a repeat of the 2018 midterm elections in North Carolina, where Democrats won 48.3% of the votes statewide but only took three out of 13 seats in Congress.

At the end of the day, the National Popular Vote movement might be the best option available, rendering the Electoral College effectively moot and putting an end to results that gave us George W. Bush in 2000 and Donald Trump in 2016. It isn’t perfect, and a state that joins the compact today might just abandon it later if its political leadership changes—and right now, the Republican Party has a lot vested in preserving a system that gives it an inordinate advantage.

But the common criticism that a National Popular Vote would mean that cities would be advantaged over rural areas doesn’t hold up. It does mean that while, say, a Republican candidate might lose California because the volume of votes in Los Angeles, San Francisco, and San Diego outweigh the rest of the state, all the votes the candidate might win in the conservative Central Valley or suburbs like Orange County would help boost the candidate’s national tally. It also means that voters in liberal cities in red states, such as Salt Lake City and Houston, would still matter in the grand scheme of things, even if Utah or Texas never joined the compact.

All that matters in the National Popular Vote compact is who gets the most votes across the United States. It means that we’d be a bit closer to realizing the dream of one person, one vote. It isn’t perfect, but it may be good enough.

I Enabled White Male Privilege in My Classrooms for Years

Racial Microaggressions Are Real. Here’s How to Navigate Them

Impeachment: The Word That Dare Not Speak Its Name

With Reparations, We Must Demand Repair—and Heal Ourselves

The Biggest Question After the Mueller Report Is Not Impeachment