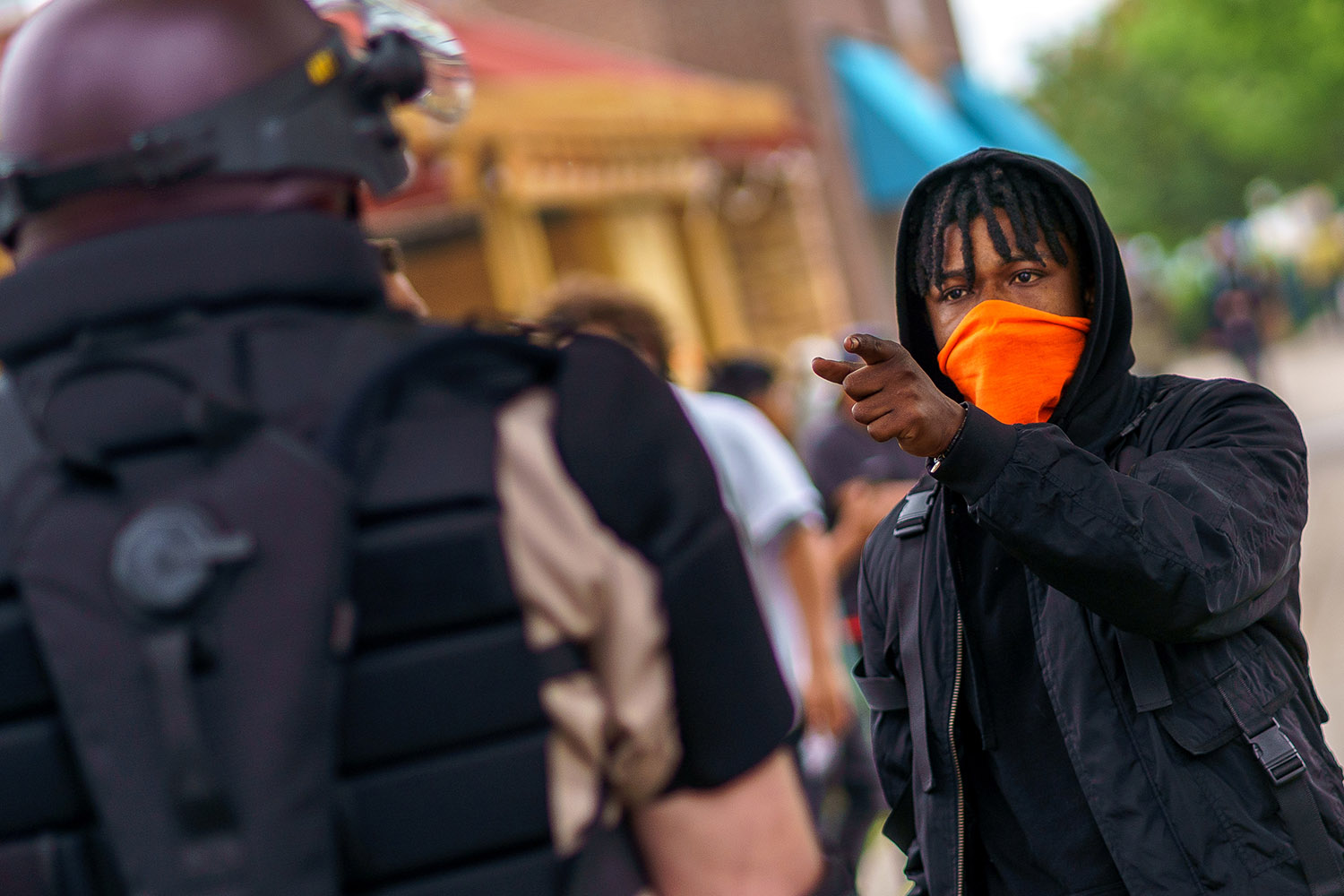 A protester faces off with Minnesota State Police officers on May 29, 2020, in Minneapolis. Photo by Kerem Yucel / AFP/ Getty Images.

There’s no greater frustration than working every day to build and inspire others to build a more just, compassionate world, only to be so brutally reminded of how far away that world is, as we are bombarded by videos of an atrocity such as the police killing of Minneapolis resident George Floyd.

Witnessing someone being killed is terrorizing.

I am experiencing episodes of terror after seeing the life leave Floyd’s handcuffed body under the knee of Minneapolis police officer Derek Chauvin, while two officers held down Floyd, and another stood idly by. That image will stay with me for a long time, just as Eric Garner’s has, just as Philando Castile’s has, and Terence Crutcher’s, and 12-year-old Tamir Rice’s. And with those images, the stories of Trayvon Martin, Jamar Clark, Sandra Bland, Jordan Davis, Alton Sterling, Atatiana Jefferson, Botham Jean, Ahmaud Arbery, Breonna Taylor, Sandra Bland, 7-year-old Aiyana Stanley-Jones, Charleena Lyles, a pregnant mother of four, and countless others.

If I can feel heightened terror and experience trauma from watching a video of something that happened in a city more than 1,600 miles away, I can imagine the state of being of those who were present while Floyd—for eight to nine minutes—desperately pleaded for his life. He repeated over and over, “I can’t breathe.” Those were his last words. I imagine that level of trepidation, and subsequent full-blown panic, could shock one into a state of rage, even temporary insanity—some having themselves yelled for Chauvin to take his knee off Floyd’s neck.

It took four days for Chauvin to be arrested and charged. He killed Floyd on May 25, Memorial Day.

An uprising was inevitable.

It appears Minneapolis Mayor Jacob Frey is aware of that. “What we’ve seen over the last two days in the emotion-ridden conflict over last night is the result of so much built up anger and sadness that has been ingrained in our Black community, not just because of five minutes of horror, but 400 years,” Frey said at a May 28 news conference. “If you’re feeling that sadness and that anger it’s not only understandable, it’s right.” Frey went on to say that the protest was a reflection of “the truth that our Black community has lived.” He implores that that “sadness” must also be understood by non-Black communities, though they may not have the same lived experience. “To ignore it, to toss it out, would be to ignore the values we all claim to have that are all the more important during a time of crisis.”

I have no choice but to imagine restoration now in the midst of chaos.

It’s understandable to me that as I write this that the Minneapolis Police Department’s Third Precinct building is on fire. I imagine there’s symbolism in the burning. Maybe it’ll burn to the ground, and out of the ashes the restorative justice movement that has been building in Minneapolis will grow stronger. Maybe it will grow strong enough to bring about true transformation, not just in Minneapolis but throughout this country, where other grassroots movements are pushing for divestment in our local state and federal militarized police institutions. Then maybe George Floyd’s death would not have been in vain. I have no choice but to imagine restoration now, amid chaos. My threshold for Black pain at the endless death of unarmed Black cis and trans men, women, and children maxed out killings ago.

While Mayor Frey’s comments were heartfelt and, I believe, sincere, I’m sure the residents of Minneapolis would have liked to see that same level of empathy in action when considering his police budget for 2020.

For the past several years, coalitions of grassroots groups and organizations in Minneapolis have been pushing to defund the Minneapolis Police Department and build community-focused solutions. In 2016, organizers behind the MPD150 initiative created a report tracing the 150-year history—from slave patrols to current day—of the Minneapolis police. A key finding of the report is that there are “viable existing alternatives for policing in every area in which police engage.”

In 2019, groups succeeded in getting the City Council to reallocate $1 million from the police budget to create the Office of Violence Prevention. This year, only $242,000 was allocated to that office. The responsibility of the OVP is to provide strategic direction and coordination for the city’s effort to reduce the risk of violence. Among its duties are developing a citywide comprehensive plan for violence prevention and reduction in collaboration with city departments, community stakeholders, and any relevant advisory boards or commissions, as well as to collect, analyze, and report violence-related data from across the city.

Last year, the city of Minneapolis created a work group that examined the most common types of calls police got from 911, Council member Jeremiah Ellison of Ward 5 told me in a recent phone call. “Community stakeholders got together to look at what 911 data tell us,” he said. “We discovered there are a lot of calls that police get …where a police officer is not needed to resolve that call.”

Most of those calls were mental health-related, Ellison said. “If 20% of 911 calls don’t require an officer but need response, why not put that money into an area with unarmed, [nonviolent] responders.” Ellison said having that data gives the council footing to develop a plan. “No one is simply going to defund police without a plan.”

But incremental change, Ellison said, has been a bit of joke. “It doesn’t get at the kind of justice that people deserve. Not on an individual basis. Or in a broader sense… We gotta wrap our minds around making bolder leaps. We need to start putting our minds and actions toward developing innovative crisis response that’s not police. Where guns or violence are not required.”

What happened to Floyd, and the countless others, was avoidable.

The activist-turned-policymaker expressed his annoyance with the legislative process. “You get elected to make these decisions, but you have to make them with other people. It’s frustrating.”

He went on to say, though, that recently elected officials who would have scoffed at disarming or defunding police are now saying this is an idea we should take seriously. “And that’s how it’s got to be,” Ellison said. “Not just in Minneapolis, but everywhere!”

Non-solutions such as body cams and de-escalation training are clearly not the answer. The number of police killings between 2018 and 2019 increased, despite the growing use of body cams by police districts around the country.

“We have to tackle those embedded assumptions that we need a police force,” Ellison said. “They’re not working for us, they’re killing us.”

Ellison had been out in his ward with the protesters for two nights—on the north side, which is made up of working-class, working poor, and mostly Black and other people of color. He was critical of MPD’s response to the onset of the protest.

“The north side is where all of this type of stuff happens,” Ellison said, referencing the police killing of Jamar Clark in 2015. After police drew guns on Ellison, who was protesting in response to Clark’s death, Ellison decided to run for office.

We need better leadership in this country—at every level.

He shared his observations of the protests: “You have some community members throwing things, but the response from police is so brutal that it can’t be justified. And is the presence necessary when the police are the ones being protested against?”

The city is failing, Ellison said. “If the goal was to prevent property damage and keep people safe, that’s not what’s happening.”

Two hundred businesses have been burned. Millions of dollars in property damage has occurred.

A protester was killed. And others have been teargassed and shot with rubber bullets and acrylic marker rounds.

“[The city is] not achieving any of our stated goals,” Ellison said. “And yet we refuse to send them home.”

“Our employees needed to behave to a higher standard, and they didn’t do that,” he said of the officers. We need more checks and balance over the police, he added. “We employ a department that by and large hold[s] our community in contempt. We need to figure out how to better employ our resources.”

Being Black in this country means being at war on every front in every space at every moment.

But, all things considered, Ellison said, “we’ve got to keep pushing.”

As one potential way to decrease the number of killings, Ellison suggested that there should be insurance on officers, so that when the city has to pay out for police misconduct, it doesn’t come out of taxpayers’ pockets. Officers know they face no real financial consequences, Ellison explained. He also suggested that the City Council revaluate why it has no authority over the police and rectify that. The department falls squarely under the purview of the mayor.

What happened to Floyd, and the countless others, was avoidable.

“We need something else. Something better,” Ellison said.

I agree. We need better leadership in this country—at every level. And we need to institute real policy that works for the people, not the profiteers holding municipal, state, or federal office.

When the president suggests in a tweet that the National Guard should be sent in to shoot protesters, we have fully entered an autocratic form of government in this country.

Ellison said he was “disappointed” by Minnesota governor’s initial response to call in the National Guard. I’m incensed by Trump’s.

An increased military presence doesn’t calm down people. It doesn’t make people feel safe. Militarized responses to uprisings of the past should have taught us that.

And all of this amid a pandemic. Being Black in this country means being at war on every front in every space at every moment. As the demographic hardest-hit by the coronavirus, we should be sheltering in place and social distancing, but we’re out—some of us in masks—in throngs protesting the centuries-long injustices of racism in this country. This epidemic of racism is more prevalent, more real, more tangible than even a virus that is taking lives seemingly overnight. When do Black people get to rest, to be safe, to breathe?

Until that is appropriately recognized and acknowledged, and steps are taken toward repair and restoration, we will continue to experience terrorizing trauma and respond with unrest. “I don’t want to see this become the center of an outbreak,” Ellison told me regarding the pandemic. “But we may very well see that.”

In Response to the Coronavirus, Governors Are the Real Leaders

Healing From Colonization on Thanksgiving and Beyond

Remember, Things Can Change for the Better (U.K.’s Labour Party Proves It)