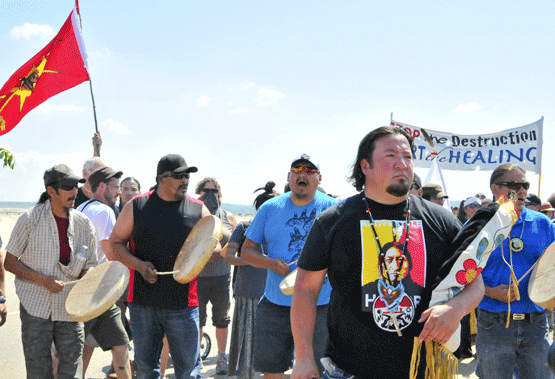 Marchers participate in the 2014 Tar Sands Healing Walk. All photos by Liana Lopez.

Organizers agreed that the annual marches have helped raise awareness about the mining project. But their work is far from done.

Why you can trust us
By Liana Lopez
4 MIN READ

The fifth and final Tar Sands Healing Walk took place on June 28 in Fort McMurray, Canada. Hundreds of people joined First Nations leaders in a prayer-filled walk around the refineries and “land reclamation” projects operated by the oil company Syncrude.

Within the last five years, awareness about the issue has spread at a tremendous pace.

“This isn’t protest or a rally,” organizer Crystal Lameman told the participants in the walk. “This is a spiritual gathering with prayers and ceremony in order to help bring all of us to an understanding about how bad this is and why it has to stop. The best way to stop it is at the source. So we need to start here.”

The Healing Walk gathering took place from June 27 to 29, with workshops and traditional ceremonies leading up to Saturday’s walk. A lot of discussion this year centered on the Canadian Supreme Court’s unanimous ruling, announced the day before the gathering, which granted aboriginal title to the Tsilhqot’in Nation. The decision may set a precedent for other First Nations, allowing them better footing in their fight against tar sands pipelines and other forms of industrial development.

In this final year of the Tar Sands Healing Walk, organizers were quick to point out that their fight is not yet won. Far from it, as tar sands extraction is ramping up in Canada.

Yet, just within the last five years, awareness about the issue has spread at a tremendous pace. And this year’s Healing Walk drew participants from all over world, including, for the first time, a Gulf Coast delegation from Houston, Texas, and Mobile, Ala., where tar sands refining and storage is set to take place this year.

“We wanted to come see the source of what will be coming to our area and learn what can be done to stop it,” said Mae Jones, who came with the Alabama delegation. “We are honored to be part of the walk this year.”

The organizers of the Healing Walk also said that, although this is the last year of the event, upcoming projects are being planned that will be just as important.

Marchers camped at a spot called Indian Beach. Although the setting was beautiful, organizers informed the marchers that the water was contaminated with heavy metals and chemicals from mining.

First Nations women take their positions under a banner before the start of the Healing Walk.

Grand Chief of the Assembly of Manitoba Derek Nepinak and First Nation Dene drummers at the beginning of the march.

First Nation Dene drummers from Canada’s Northwest Territories played for the entirety of the walk.

The Tar Sands Healing Walk begins its 16-kilometer trek through the heart of a tar sands mining operations.

After Syncrude was fined $3 million in 2008—when more than 1,600 migratory ducks died after landing in a toxic tailings pond—the company began using decoys and air cannons to frighten birds away. The Healing Walk passed this fake bird of prey mounted in a pond, complete with robotic wing movements and recorded cries.

Marchers take one of four breaks along the route for prayer, rest, and nourishment. Each break included a prayer to one of the four winds.

Dust masks were provided, but many participants brought their own respirators to protect themselves from chemical pollutants and awful smells.

A tailings pond marks the beginning of the final segment of the Healing Walk.

The “scarecrows” hanging out in this toxic sludge resemble human employees in full work gear. They were pretty scary to the real humans walking by as well.

The view of Syncrude’s facilities from the end of the Tar Sands Healing Walk.

A marcher helps a canine companion stay cool on the walk.