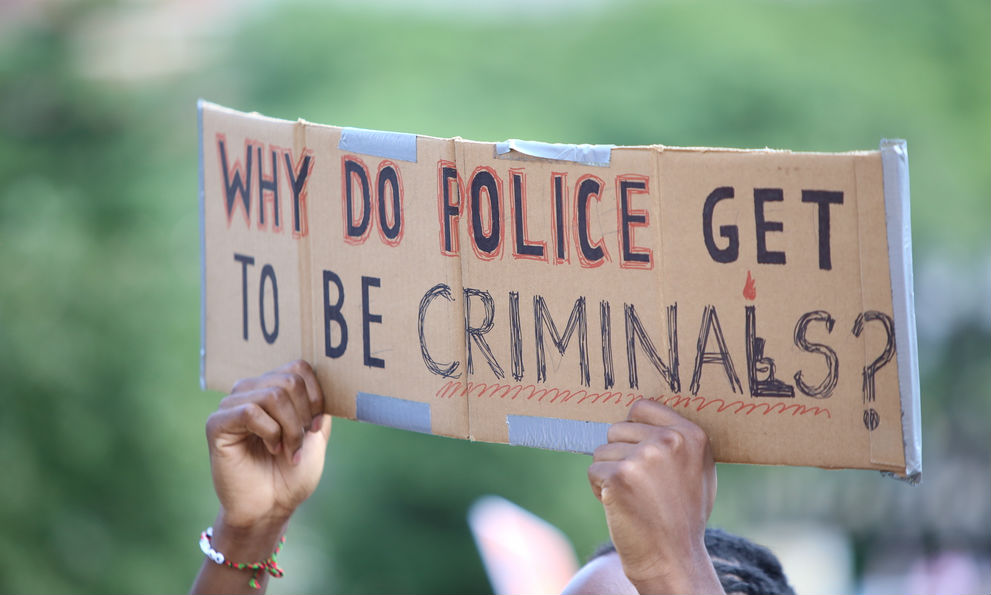 More than one thousand activists gathered for a rally and march against police brutality in Newark, New Jersey on July 25 2015. Photo from Shutterstock.

More than 200 cities have civilian boards that recommend consequences for police who break the rules. Most boards lack enforcement power, but Newark Mayor Ras Baraka is trying to change that.
By Daniel Ross
6 MIN READ

Back in 2014, Ezell Ford, a 25-year-old mentally ill black man, was shot and killed by two LAPD officers in South Los Angeles. Ford was unarmed, though the officers involved insisted that a struggle had occurred between one of the officers and Ford prior to the shooting.

After a lengthy investigation, the Los Angeles Police Commission—a five-member civilian review board that oversees the LAPD—determined in June of the following year that one of the officers was wrong to draw his weapon and open fire. But because then-LAPD Chief Charlie Beck had final say over disciplinary matters, he had the authority to refrain from meting out any punishment to the officers involved—something that had happened multiple times before. These situations have led to heated disagreements between Beck and the Commission about his lack of punitive action in cases where the board has determined wrongdoing by an officer.

The LA Police Commission isn’t alone in its lack of muscle in disciplinary cases. Civilian review boards the nation over are limited to making recommendations only. But with the full glare of the nation’s media still very much pointed towards police use of aggressive and often deadly tactics, support for civilian review boards’ increased authority is gaining traction in states across the nation. Presidential hopeful Martin O’Malley has promised that stronger police review panels would be one of his priorities should he gain office.

This is why many eyes are turned towards Newark, New Jersey, where Mayor Ras Baraka in April 2015 unveiled plans to institute a new Civilian Complaint Review Board with real bite to oversee a department long characterized by systemic racism and abusive police policies. And proponents of the review board suggest that in the absence of any legal challenges, the panel could be up and running within six months.

What is a civilian review panel?

Widely seen as watchdogs of the police, civilian review boards are charged with investigating complaints of police misconduct made by members of the public. There are more than 200 different civilian review panels around the nation, but they differ in their overall jurisdiction. Some have subpoena powers and the authority to demand police testimony. Some conduct their investigations alongside that of an internal affairs bureau, while others have sole investigatory powers. But few, if any, have the final say when it comes to imposing disciplinary measures—something that makes Newark unique.

“Newark’s recommendations are slated to have a degree of binding authority,” Baraka promised in April 2015, at the board’s unveiling. If a complaint against an officer is substantiated, senior police officers will impose discipline determined by guidelines established by the panel. The panel’s recommendations could be overruled only if Newark’s police director establishes error in the board’s decision. Alongside similarly rigorous investigative powers, Newark’s 11-member review board will also comprise nine members voted in from local and civil rights organizations—a rare characteristic among other civilian review boards.

Brian Buchner, president of the National Association for Civilian Oversight of Law Enforcement—a nonprofit organization seeking to combine the efforts of individuals and agencies pushing for greater civilian oversight of the police—said other communities are “watching closely” how the board integrates organizations like the ACLU.

“Because of the history of police oversight, and the history of the intersection between race and policing, there are a lot of groups who are interested in having a prominent and permanent role in actually conducting oversight of law enforcement and not just getting it set up,” Buchner said.

That the program doesn’t currently have a permanent funding stream is a point of contention for some, however.

The original proposal tied the budget of the review board to a percentage of the police department’s non-capital budget, so that the board grew and shrank in relation to the size of the police department. This would have taken the review board out of the political arena by ensuring that future administrations in opposition to the board are unable to cut the program’s funding, said Udi Ofer, executive director of the American Civil Liberties Union of New Jersey.

Nevertheless, if Newark’s civilian review panel proves successful, many believe that it could act as a model for the rest of the nation. But the board is only one of a number of community-based initiatives that Baraka has proposed to reform a city plagued with soaring levels of poverty, crime, and unemployment.

In the thick of it

Son of noted poet and activist Amiri Baraka, Ras Baraka’s political career has been built from the community level up. He was a high school principal before terms as both Newark Deputy Mayor and South Ward council member prefaced his second run for mayor last year. (He first ran for office in 1994.)

“Ultimately, I’ve always been a grassroots organizer,” Baraka told Politico Magazine in early 2015. “When you’re the principal of a school, you’ve got to be right in the thick of it, or it isn’t going to work.”

But reform of Newark’s police force has delivered Baraka a formidable challenge: His successful run for office arrived at a critical juncture for the department. One year on after being placed under federal oversight for rampant misconduct, the NPD is still under federal scrutiny. A three-year investigation by the U.S. Department of Justice revealed critical “deficiencies” in the department, “including its systems for reviewing force and investigating complaints regarding officer conduct.” The findings of the 49–page report, released in July 2015, are as lengthy as they are damning.

Investigators found widespread violations of the Fourth Amendment. For example, up to 75 percent of stop-and-frisks in Newark were unconstitutional. The report also found a pattern of excessive use of force by police officers, as well as vast racial disparities in policing practices, with black Newarkers “bearing the brunt of the police department’s enforcement activities.” While black residents comprise 54 percent of Newark’s population, they made up nearly 85 percent of police stop-and frisks. The report paints a picture of a community deeply mistrustful of its police force.

Baraka has tried to repair the ties between the two camps. The civilian review board, for example, was designed to have “broad transparency” by giving the public increased access to police records. To provide greater local authority over officer training, Baraka’s pushing for a city-operated Newark Police Academy. In March of 2015, he launched a free, 13-week program that gives business owners, managers, and employees firsthand experience of the police department’s day-to-day operations in another attempt to “break down the barriers between the Police Department and all sectors of [the] community.”

Other cities are indeed watching developments there closely. Jubilee Shine, head of the Coalition for Community Control Over the Police in Los Angeles, believes that, in light of the friction generated by Beck’s unilateral decision-making authority in disciplinary matters, Newark’s review panel model should be replicated in LA.

“The most critical aspect of their review board surrounds their ability to have binding disciplinary power over police officers who act out of policy,” said Shine.

As specific details concerning Newark’s civilian review board continue to be thrashed out, there has been pushback in some quarters. Police unions have questioned whether the board falls beyond existing state statutes and labor contracts that govern police disciplinary reviews, and have threatened to take the issue to the courts, if necessary. Additionally, a recent uptick in street violence in Newark has added more heat to the issue.

Still, says Ofer, “saying it doesn’t have the legal authority does not, in my mind, provide a substantive argument as to why the board should not exist.” The review board was created through careful legal analysis with much thought put to the exact breadth and nature of authority the review board could wield under state law, he said.

“If people want to engage in substantive conversations about why having a professional civilian review board is a bad thing for Newark, then I’m very happy to engage in that conversation,” Ofer said. “We’re very confident that it will survive legal challenges.”

Updated June 12, 2020: The future of the review board is currently being weighed in the New Jersey Supreme Court after a series of court challenges from the Newark police union. In June 2019, a New Jersey appellate court restored many of the board’s powers that had been stripped in a prior judicial ruling. November 2019, the state Supreme Court agreed to take up the case, oral arguments for which were heard in April.

Correction: An earlier version of this story reported that 11 members of the review board would be civil rights workers. The correct number is nine out of 11 total members.

After Death of Radical Mayor, Mississippi’s Capital Wrestles With His Economic Vision