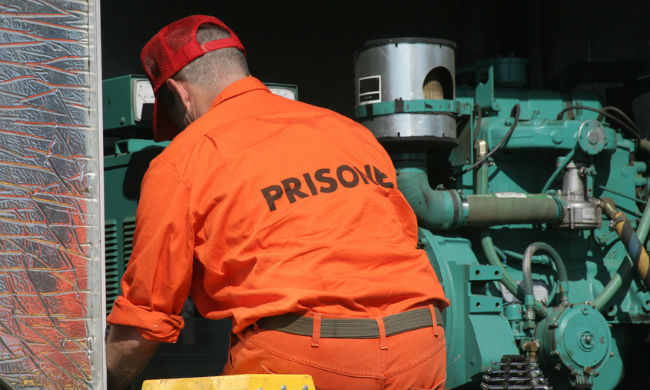 Prisoners throughout Alabama and Texas reclaim their humanity—and power—by shutting down the economic infrastructure of their prisons.

Why you can trust us
By Raven Rakia
6 MIN READ

On May 1, prison labor came to a halt in multiple prisons in Alabama, including Holman and Elmore prisons. Starting at midnight that day, prisoners stayed in their dormitories—refusing to show up for work at their assigned posts: the kitchen, the license plate manufacturing plant, the recycling plant, the food processing center, and a prison farm.

The prisoners’ demands were pretty simple: basic human rights, educational opportunities, and a reform of Alabama’s harsh sentencing guidelines and parole board.

The labor strikes are a turn from the most familiar type of political protest behind bars: the hunger strike.

The strike in Alabama was just the latest in a series of strikes at U.S. prisons. On April 4, at least seven prisons in Texas staged a work strike after a prisoner sent out a call with the help of outside organizers. About a month earlier, prisoners in multiple states including both Texas and Alabama, as well as Virginia and Ohio, called for a national general strike among prisoners on Sept. 9, 2016, the 45th anniversary of the Attica Rebellion, where guards and inmates died during a prison revolt in upstate New York.

The labor strikes are a turn from the most familiar type of political protest behind bars: the hunger strike. While hunger strikes pull at the moral heartstrings of the public, work stoppages threaten the economic infrastructure of the prison system itself.

The strike in Alabama was organized by the Free Alabama Movement, a nonviolent grassroots organizing group created by prisoners that focuses on the human rights of Alabama’s imprisoned. Not only does Alabama have one of the highest incarceration rates in the United States, but it also has one of the most overcrowded prison systems. The system’s current population sits at about 80 percent over capacity. With nearly double the inmates that the prisons were designed to hold, the packed prisons produce violence, unsanitary conditions, and medical neglect.

“We view prison labor as real slavery…[in] 1865 when the 13th Amendment was ratified…they started the first wave of mass incarcerating black people,” said Melvin Ray, co-founder of the Free Alabama Movement. In the years after slavery, a formal prison system formed in the South. Some plantations were bought by the state and turned into prisons. “They use [these prisons] as a tool of control. They target African-American communities. They target politically conscious people, politically conscious organizations. And they use these prisons as a form of social control in addition to a plantation [that’s] generating revenue.”

In 2014, when Ray, along with Robert Council, founded the Free Alabama Movement, they organized a work stoppage at the Holman and St. Clair prisons. The strike at Holman prison, where Council was incarcerated, lasted from Jan. 1 to 22. Immediately afterward, both men were thrown into solitary confinement. Ray stayed there for more than a year and was just recently released to general population. Council remains in solitary confinement to this day.

Prison officials list a number of justifications for Council’s segregation including that he allegedly administered the Free Alabama Movement Facebook group, and he was a leading and significant factor in the work strike.

From Robben Island to Guantanamo to San Quentin, the hunger strike and the penitentiary seem attached to each other.

From Robben Island to Guantanamo to San Quentin, the hunger strike and the penitentiary seem attached to each other. Yet the organizers of the Free Alabama Movement have intentionally moved away from the practice.

In an essay titled “Let The Crops Rot in the Fields,” Ray and Council laid out a plan for tackling mass incarceration. The essay argues that the old ways of protesting in prisons—including hunger strikes and letter-writing campaigns—are not sufficient. Instead, organizers should attack the economic incentive of prisons. The answer, then, is to stop working—and remove the corporate profit from the prison industrial complex. The title was a reference to work strikes conducted by people who were enslaved in the South.

Members of the Incarcerated Workers Organizing Committee, the prison-organizing group of the Industrial Workers of the World labor union, started sending copies of “Let The Crops Rot in the Fields” to prisoners in other states. The labor union, apparently the only current union that welcomes prisoners, has about 800 members behind bars across the country. The essay has inspired prisoners in Virginia, Ohio, and Mississippi to organize to participate in the National Day of Strike in September 2016 and, for Texas, to have organized a work strike of their own in April.

Ray and Council haven’t always held these views. “Over the years we’ve tried a few other different things. We’ve tried letter-writing campaigns. We’ve tried marching, protesting, filing complaints in the court. We’ve tried basically all of the avenues that can be used that are made available to people who are incarcerated,” Council said.

In 2007, the entire population at Holman prison, including Council, participated in a hunger strike. The prison was in a deplorable state—backed-up sewage issues, mold on the walls, collapsed and rusted pipes. The prisoners demanded that internal affairs and reporters be allowed inside the prison to document the conditions.

Ray and Council met in prison when they were both jailhouse lawyers, assisting other prisoners with filing lawsuits and complaints about the issues in the prison while also writing their own. As their incarceration continued and their lawsuits and grievances against the prisons went nowhere, Council, Ray, and other prisoners began to have a change of heart on how to bring about change. “We were begging [officials] to please follow the rules. Please have mercy on me. We’re asking some people to have mercy that just don’t have any mercy,” Council explained. “That revelation brought us to the fact that you can’t appeal to the moral [part] of a system that doesn’t have morals.”

Prisons would “grind to a halt” without the use of prison labor.

The sentiment echoes the thoughts of the late Stokely Carmichael, a civil rights leader and organizer with the Student Nonviolent Coordinating Committee, which led the civil rights movement among youth in the South. “In order for nonviolence to work, your opponents must have a conscience,” he famously said in 1967, two years after the assassination of Malcolm X and a year before Martin Luther King Jr. was killed. “The United States has none.”

Alex Friedmann, the managing editor of Prison Legal News, a publication of the Human Rights Defense Center, said, in an email, that prisons would “grind to a halt” without the use of prison labor. “The work strikes in the Alabama and Texas prison systems are a natural and predictable result of treating prisoners as slaves and benefiting—and often profiting—from their labor. If prison officials treat prisoners as slaves, then they should not be surprised when there are occasional slave revolts,” Friedmann said.

In prisons across the country, incarcerated people are paid as little as 15 to 45 cents an hour. Even worse, in Texas, the minimum wage for a prisoner starts at zero dollars. However, these wages aren’t always what employers are paying to hire prisoners. Employers in states like Alabama, Colorado, and South Carolina pay the federal hourly minimum wage for prisoner labor. However, the wage is paid to the state, and prisoners see only a fraction of that check. In Alabama, the Department of Corrections is authorized to take up to 80 percent of a prisoner’s income, half of which can go to “offset the costs of the inmate’s incarceration.”

In prisons across the country, incarcerated people are paid as little as 15 to 45 cents an hour.

Corrections departments across the country have laws stating they can take part or most of prisoners’ wages to pay for the upkeep of the prison or room and board. Incarcerating the highest rate of prisoners in the world comes at a cost, so states have increasingly used the prisoners’ own labor to lower prison costs. Prolonged work stoppages threaten to increase these costs and create a more expensive prison system—some states, like Alabama with its high budget deficit, simply can’t afford that.

Two weeks after May’s strike ended, the warden at Holman Correctional Facility, Carter Davenport, retired. Davenport had arrived at Holman in December 2015, and just three months later, a major prison uprising erupted where a prisoner stabbed him (he recovered). Before Holman, he was the warden at St. Clair Correctional Facility from 2010 to 2015. In 2012, he was suspended for two days after punching a handcuffed inmate in the face, according to an Alabama news site. Equal Justice Initiative, a nonprofit in Alabama, sued Davenport, as well as the Alabama Department of Corrections, in 2014 for facilitating a culture of violence at St. Clair (the lawsuit is ongoing). That same year, with violence at St. Clair increasing, the nonprofit called for Davenport to be replaced as warden.

Last year, Charlotte Morrison of the Equal Justice Initiative criticized Davenport’s leadership at St. Clair. “[Those] in charge of leading these facilities are creating abusive, dangerous environments,” Morrison said. “Warden Davenport, somebody who punched a handcuffed inmate in the face, that’s the kind of leadership he models. And what we see at the prison is control through intimidation and violence.” Prisoners at Holman had similar opinions about Davenport, so his retirement was a major victory for them.

The ADOC denies Davenport’s retirement resulted from the work strike or the March uprising; however, his removal was a goal for nonprofit advocates and prisoners alike.

Forget Nutraloaf—Prisoners Are Growing Their Own Food