Why you can trust us
By Christine Hitt
7 MIN READ

On the day construction of the Thirty Meter Telescope was supposed to begin, protesters, who refer to themselves as protectors, blocked the road.

Native Hawaiians and other Indigenous peoples need more authority in the federal and state project processes that affect them.

Thousands stand guard at the base of Mauna Kea, a dormant shield volcano on the Island of Hawai‘i, protesting the construction of another telescope on its summit. This would be the 14th since 1968, when the Hawai‘i State Land Board issued a lease to the University of Hawai‘i to build a single observatory and the Mauna Kea Science Reserve was established. Mass protests sparked by construction projects aren’t new among Indigenous communities. Grassroots movements like the resistance to the Dakota Access Pipeline in 2016 and the recent Mauna Kea protests raise questions about how Indigenous people can be genuinely involved in decision-making processes for these projects. The proposed Thirty Meter Telescope is the largest undertaking on Mauna Kea to date, with a dome planned to be 180 feet tall and an observatory footprint that would encompass 5 acres. Advocates say the telescope would allow astronomers to look deeper into space and detect the faintest galaxies, and there’s also the chance that they could get a step closer to knowing whether there is extraterrestrial life. 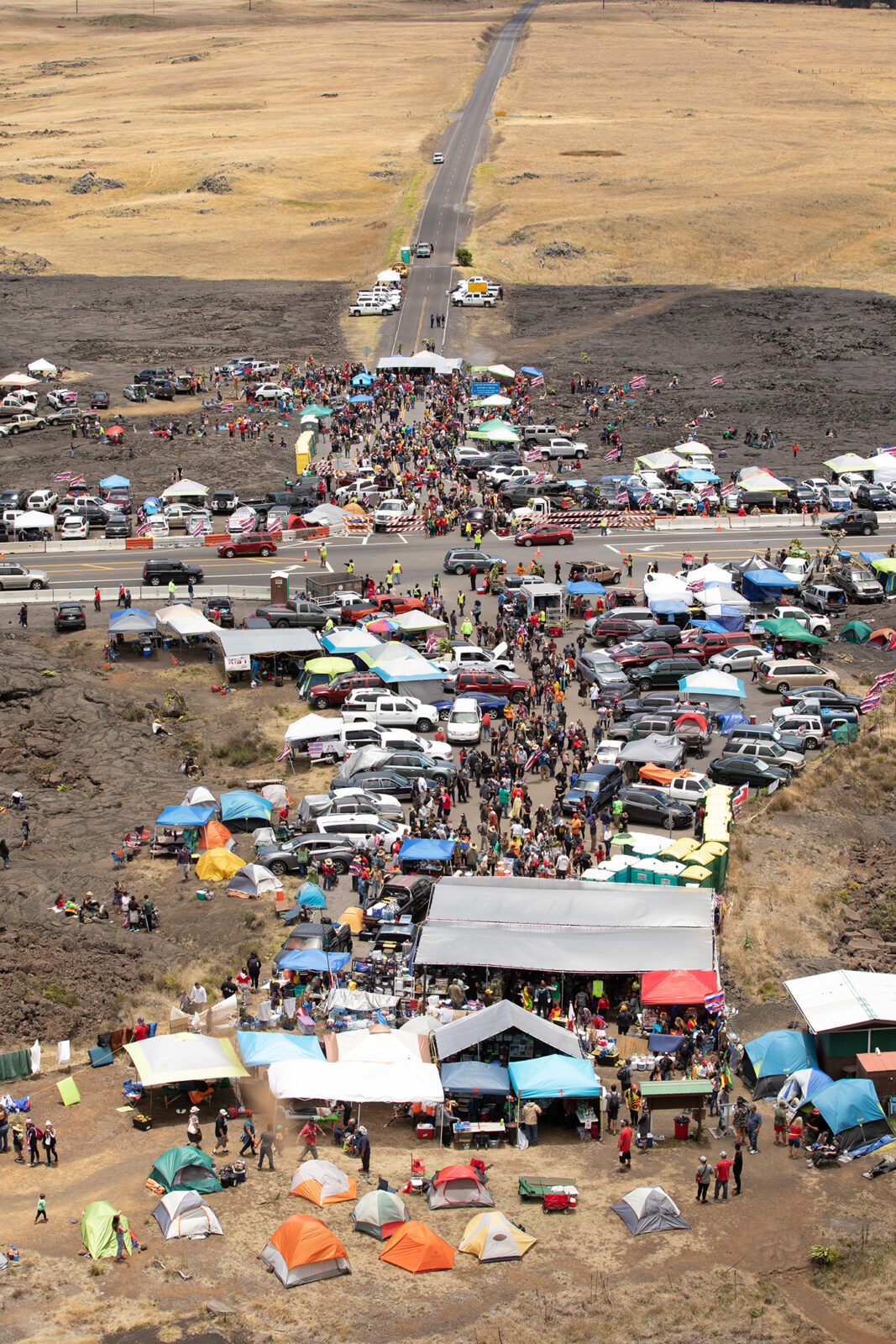 The project received final approvals from the state to begin construction last month, despite strong opposition from many Native Hawaiians who consider Mauna Kea to be sacred. The mountain, which has the highest peak in Hawai‘i, is central to the Native Hawaiian story of creation, and its summit is described as the realm of the gods. Unlike Westernized cultures, Native Hawaiian culture, as well as other Indigenous cultures, reflects a holistic worldview where land cannot be separated from religion, values, environmental protection, subsistence, and livelihoods. Losing land can feel like a loss of identity because it breaks that holistic bond that’s part of an Indigenous life. When the Board of Land and Natural Resources ruled in favor of the TMT in September 2017, it found no physical evidence that it would affect historic cultural sites such as burials or altars because sites like these are not within its direct vicinity. This ruling didn’t account for the sanctity of the mountain in Native Hawaiian culture. Appeals were sent by TMT opponents, including Native Hawaiian organization Mauna Kea Anaina Hou, to the Hawai‘i Supreme Court, which later ruled in favor of the board’s decision.

“I think that laws exist to protect our rights, but there’s no one who’s willing to enforce them, including the Supreme Court of Hawai‘i, who really turned their back on the Hawaiian people at this time in a very dire, serious time of need,” says Kealoha Pisciotta, president of Mauna Kea Anaina Hou, which has voiced opposition against telescopes since 2001. She’s been an active participant in the protests at the base of Mauna Kea. “They failed us by not really looking at our case.” While laws and treaties protect Indigenous rights and a consultation process that is supposed to include them from the beginning to end, the system gives more authority to the agency involved than the public or tribes, and there’s room to override procedures and rulings. “The whole notion of ‘consultation’ really comes out of the framework where the Indigenous people concerned are fully subservient to the state—state meaning the country,” says Carla Fredericks, faculty director of First Peoples Worldwide, and director of the American Indian Law Clinic at the University of Colorado Law School. It’s a flawed premise and falls out of line with international standards, she adds. In the case of the Dakota Access Pipeline project, it was expedited because of President Trump’s approval, without tribal consultation of a completed environmental review, and the pipeline has been operating now for more than two years. In the case of the TMT, it completed the permit process and was validated by the courts—however, Indigenous views were ultimately overruled.

In the current process, if a federal or federally assisted project could potentially disrupt a historic site, a Section 106 review must be conducted that consults affected parties, such as state preservation organizations, Indigenous groups, and the public. Often, though, these consultations happen late in the process, after most approvals for a project have already been given. These talks then become more of an informational meeting, rather than a conversation about whether or not a project should move forward.

“It’s kind of like just a mere compliance mechanism, where Indigenous people are really just talked at about a project as opposed to coming together in true partnership,” Fredericks says. Agencies are required to resolve any opposing opinions that may come up, but because it’s also the agency’s decision about how to resolve it, Indigenous groups are left without much power in the matter. Earlier this year, the U.S. Government Accountability Office completed a report on tribal consultation, outlining problems and recommendations with the federal process. It included interviews with 57 tribes and 21 federal agencies. The report was a follow-up to a 2017 ACHP report on how to improve tribal consultation in infrastructure projects. Many of the issues identified by tribes included agencies initiating consultation late or not adequately considering their input, while issues hindering the agencies included challenges obtaining contact information for tribes and difficulty coordinating with other federal agencies that are involved. Recommendations were given to 17 individual agencies on how to improve policies.

“Many tribal commenters asserted that, in order for consultation to be meaningful, Indian tribes must have decision-making authority,” according to the 2017 report. “The majority of commenters, in fact, called for ‘free, prior, and informed consent,’ a central tenet of the United Nations Declaration on the Rights of Indigenous Peoples. Many tribal commenters felt that unless federal agencies are willing to reject project proposals based on tribal objections, tribal input is essentially meaningless.” Free, prior, and informed consent means that Indigenous people have an equal spot at the table from the very beginning, with input and decision-making authority. “In our case at Standing Rock, we met with the state and we met with federal agencies and the Army Corps of Engineers, but this is a checking-a-box process. It’s to tell us that this project is going to take place in the proximity of our nation,” says Dave Archambault II, the former Chairman of the Standing Rock Sioux Tribe and senior fellow for the University of Colorado’s First Peoples Worldwide. “That’s not even a conversation, because the application, the steering committee, the agency, everybody is already approving of it, so we shouldn’t be asking about consultation. What we should be mandating and what we should be asking our legislators is to seek ‘consent’ from Indigenous communities prior to planning or scoping a site or infrastructure project.” States don’t have the same relationship with Native American tribes that the federal government has, but they have tried to create workable relationships with Indigenous people. Hawai‘i is especially unique and has its own set of rules in relating to Native Hawaiians and historic sites.

Under Hawai‘i Department of Land and Natural Resources administrative rules, the state’s consultation process is similar to the federal process in that it doesn’t give Native Hawaiians FPIC. If the public disagrees with the state’s determination, then an appeal may be made to the Hawai‘i Historic Places Review Board, while further escalation would land an appeal on the governor’s desk for the final decision. “If the state were doing its job, we wouldn’t be in the situation,” says Pisciotta, referring to the state’s role to uphold its laws. “It’s the weakness of the state to be kind of like a subservient to the puppet master, who is corporate.” In light of the protests at Mauna Kea, Hawai‘i Gov. David Ige extended the construction start date by two years—to September 2021—for the telescope, while island of Hawai’i Mayor Harry Kim has been tasked to negotiate a resolution with the protesters. It remains at a standstill, and no end is in sight.

The move away from consultations toward consent hit a major milestone this year, when the state of Washington became the first office to adopt FPIC. The Washington state policy requires the Attorney General’s Office to obtain consent from the state’s 29 federally recognized tribes that may be directly affected before initiating a project that would adversely affect them. It’s a significant move forward.

“Our tribes should be in the steering committee process, we should be right with all the other agencies before approving the site … and you have to get the blessing of all these agencies, the state agencies, as well as the tribe,” Archambault said. “It makes more sense to try to get ‘consent’ rather than to force something down a nation’s throat. And that’s how Indigenous people have been treated for 500 years since we had contact with Europeans or the Spaniards. Their will was forced on us without our consent.”

How Black Women Are Reshaping Afrofuturism

Nuclear Power Will Not Save Us From Climate Change

Residents Are a City’s Best Source of Climate Change Data