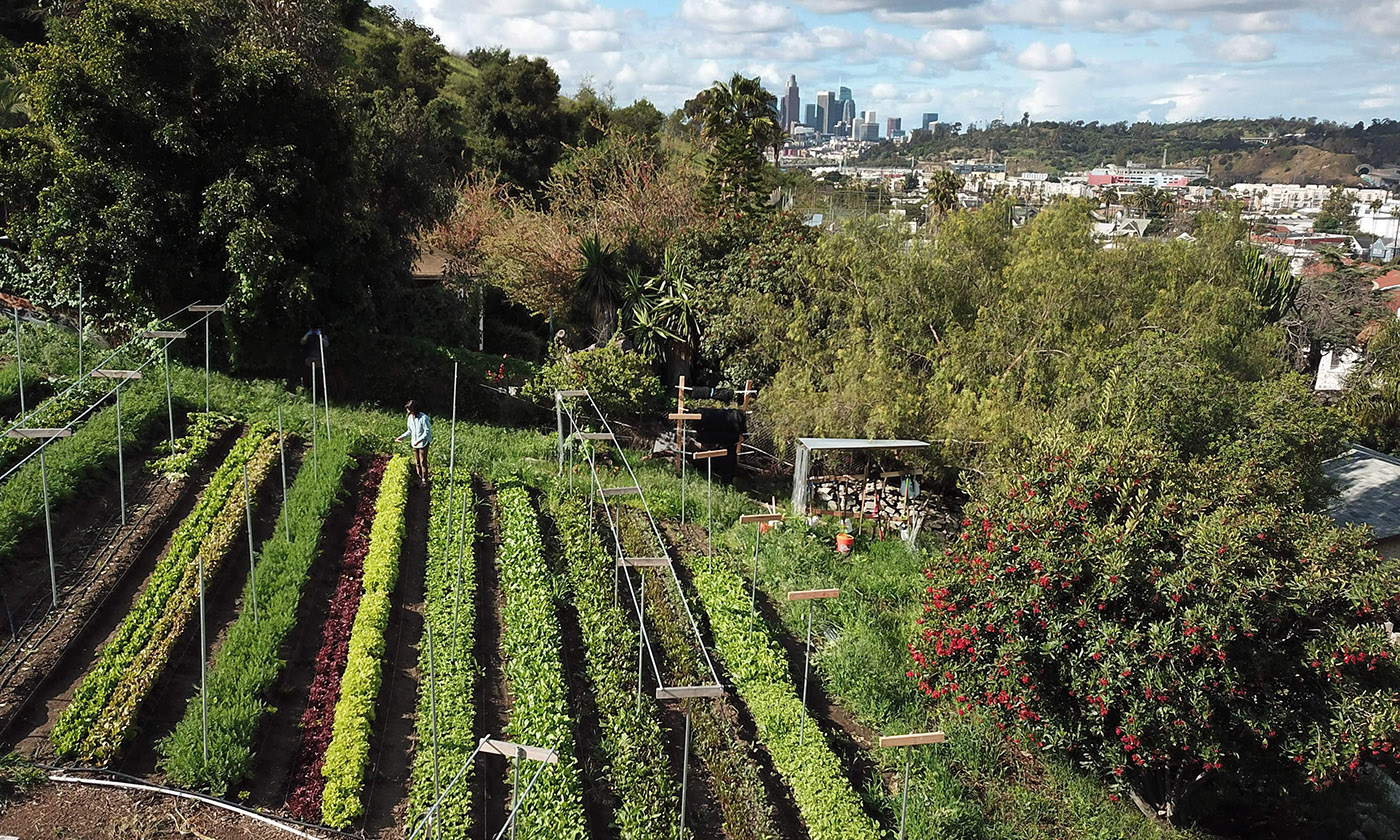 Urban farmer Ali Greer inspects her crops at Avenue 33 Farm, a backyard urban farm in Los Angeles, California, on March 25, 2020. Greer and her partner, Eric Tomassini, say that demand for their produce and flowers is higher than ever through community-supported agriculture, despite restaurant demand for their produce decreasing during the coronavirus pandemic.
Photo by Robyn Beck / AFP / Getty Images
Could this be the beginning of a new food economy?
By Stephanie Hiller
6 MIN READ

Ross Cannard is the son of an iconic leader in the local organic movement in California. “Iconoclastic,” Ross says with a chuckle. Bob Cannard built his 30-year career by rejecting organic certification in favor of his own “better than organic” breed of “natural process agriculture,” enriching the soil on his Green String Farm with crushed rock and compost.

He and his son have long sold the fruits of their labor to the famous restaurant Chez Panisse, where, since 1971, chef Alice Waters has pioneered an elegant cuisine based entirely on fresh, local foods straight from the farm.

We could help people do the cooking in their own kitchen.

But in March, the stay-at-home order hit, and the restaurant closed.

“You’re a farmer. Plants are already in the ground,” says Evan Wiig, director of membership and communications for the Community Alliance with Family Farmers. “You make plans months and months in advance. You can’t just turn on a dime.”

Waters was worried about the vulnerable situation her workers and producers were finding themselves in. She rushed to establish a subscription CSA, which stands for community supported agriculture, offering weekly food boxes that could be picked up at the shuttered restaurant, filled with goodies from her regular producers like Cannard.

“I’m trying to connect our network with the people who would like to have that food in their home,” she said on Michael Dimock’s podcast, Flipping the Table, on March 26. “We can sort of skip the restaurant for now. … We could help people do the cooking in their own kitchen.”

Cannard augments that market with his own local CSA, setting up a farm stand in the parking lot of Baker & Cook, a café in nearby Boyes Hot Springs, now serving only takeout. Along with produce, Cannard has his olive oil available, as well as wine from a friend’s vineyard, and flowers from another local farm. Friends and neighbors are among his 100 or so customers.

This CSA model, where buyers invest in a farm’s annual production upfront in exchange for a regular share of the harvest, is built on long-term relationships between farmers and consumers. It’s those relationships, farmers say, springing from the fertile soil of Sonoma County, that are making survival possible. New local grassroots networks and nimbler digital marketplaces, too, are popping up to provide critical lifelines. And despite the strange, isolating atmosphere created by the coronavirus, the region is now bursting with spring growth.

Family farms in California and across the country have been hit hard by the impact of the coronavirus on their markets. But in the health-conscious Bay Area, where celery was already one of the first groceries to disappear from the produce rack, demand for fresh local produce has shot up. The challenge is in redirecting food from farms to new customers.

Sonoma County has historically been an agricultural region. When the organic food movement sprang up in the 1970s, this area was one of its early proponents. The first farmers markets and CSAs appeared in the 1980s and flourished, but the burgeoning network was later eclipsed by an inflated wine industry, much of it owned by distant corporations.

According to a 2018 crop report, 60,000 acres have gone to grapes, with only 500 acres in food crops. Land prices have skyrocketed, the cost of labor has gone up, and increased regulations have all made it harder to run a viable business here. Many farmers had turned to “boutique” specialty crops for restaurants.

“Farmers are always in an uphill battle, especially ecological farmers,” says Wiig of the Community Alliance with Family Farmers. “I often hear them say, ‘I’m working my butt off and hoping for the best.’” That’s even more true now, as the pandemic strangles economies the world over.

Farmers are always in an uphill battle, especially ecological farmers.

For farms with existing CSAs, Wiig says, this is a really good time. “In the beginning of March, most CSAs were struggling to fill boxes. Now some now have waiting lists, some in the 100s.”

But for those who didn’t have CSAs established, Wiig says, this is a really tough time. “We’ve been able to keep farm markets open as essential businesses, but crowds have decreased with people afraid to go out, and sales are down.”

Community Alliance was quick to jump in, becoming a “matchmaker” for producers and buyers on its website. They’re also providing all kinds of information for farmers about how to start and run a CSA, including useful software, relevant legislation, available funding sources, and a series of four webinars showcasing successful farms.

Farm Trails, a local nonprofit with 250 farmer members, also leapt into the fray. The organization has been building relationships between farmers and consumers for 47 years by organizing farm visits and hosting educational events. Two days after the shelter-in-place shut down regular sales outlets, Farm Trails had put up a new page on its website and invited its members to post their offerings.

“We know our farmers well,” executive director Carmen Snyder says. “We did outreach to them to see what they had. Spirit Works had plenty of alcohol, so they started making lavender sanitizer, giving it away to first responders and health care workers, and selling the rest at the local hardware store.”

“Many people have been on the fence about CSAs,” says Sonya Perrotti, who runs the 1-acre Coyote Family Farm in Penngrove. “This was the push.” While she has always sold most of her produce in a CSA, Perrotti benefited from the new digital marketplace. She has now sold out of her 100 shares and plans to expand.

F.E.E.D. Sonoma, a food hub that aggregates produce from dozens of local farms, was another quick responder. When the pandemic hit, it went from serving Bay Area restaurants to building a cooperative of farmers, filling food boxes for distribution at F.E.E.D.’s Petaluma warehouse and other drop spots in the county.

“Our local food system is extremely diverse,” says co-founder Tim Page, who has the energy of a visionary combined with the skills of a businessman. “We have a ton of small farms but we don’t have the infrastructure to support them. That is what F.E.E.D. is trying to establish.” Since converting the restaurant supply business to a CSA, it has gone from 90 boxes to 450. Ultimately, the goal is 1,800 or more.

“I grew up in L.A.,” Page says. “Every single farm is gone. The same thing will happen here if the general public does not understand the importance of it.”

That understanding was on display at the Sonoma Farmers Market, which now operates with strict restrictions and safety precautions because of the virus. “We think F.E.E.D. is going to save us,” said Candy Wirtz, co-director of Paul’s Produce, a well-established farm in Sonoma, as she weighed out my purchases. The CSA model could be transformative for Paul’s and other farms across the country.

Subscribing to a CSA is a lifestyle change for consumers, to be sure. It means eating what’s in season and learning to cook unfamiliar vegetables. But it’s a change that many people are making now because of the stay-at-home orders. “People just have to learn to cook again instead of eating out,” says Judith Redmond, part-owner of Full Belly Farm near Sacramento.

In light of this newfound commitment to CSAs, Perrotti, of Coyote Family Farm, says: “My hope is that this solidifies instead of going back to the way things were. I hope the importance of local farming stays at the forefront.”

To help small farmers stay in business during the crisis, Community Alliance is also advocating for stimulus dollars. “Most often subsidies go to a small number of the largest farms, or to buy food that goes to food banks from far away, while local farmers can’t sell their food,” Wiig says. “We want food banks to buy from local farms.”

This seems like a win-win. Millions of tons of food is being plowed under as 60 million people are now going hungry, 17 million of them since the pandemic began, according to Feeding America, the national network of food banks.

But it’s complicated. David Goodman of the Redwood Empire Food Bank puts it plainly: Local food is too expensive. “We distribute nine and a half million pounds of produce annually,” he says. “It costs about 9 cents a pound, 3 cents to transport. With 82,000 people to feed, it would be a luxury to think of tending to local needs by buying locally.”

That reticence is partly because the food bank system is tangled in bureaucracy. The USDA decides what to purchase and from where. Because of the distances between sites, the federal agency has tended to favor foods with long shelf lives, such as canned and processed foods, and long-lasting produce like apples and potatoes. “If local food is what we need, there has to be a plan,” Goodman says.

Such a plan might be where short-term disaster relief meets long-term resilience. Michael Dimock is president of Roots of Change, a nonprofit organization that advocates for transforming California’s food system. To get serious about preparing the food system for future disasters, Dimock says, the government needs to be involved. Roots of Change is now advocating for a tax on sugary beverages to help foot the bill.

Dimock says the state needs a paradigm shift for farms to remain viable in the face of multiplying disasters to come—not only pandemics, but fires, floods, and other symptoms of climate change. “How bold will people get in the months ahead to demand real change? My hope is they will get more radical.”

Food is fundamental. While farmers have yet to face the full economic impact of this pandemic, their collaborative efforts, along with local grassroots networks, could mark the beginning of a new economy laboring to be born.