Volunteer crisis responses are crucial in an emergency. But can they make lasting change?

In the husk of an old grocery store, on an unassuming corner in the Algiers neighborhood of New Orleans, sits the Common Ground Health Clinic, a front-line fighter of COVID-19 that emerged from the wreckage of Hurricane Katrina. In leftist circles, Common Ground became one of the most storied mutual aid projects in recent history, in part because it was co-founded by a man later revealed to be an FBI informant who now works for Breitbart. But it’s also one of the longest-standing examples of the community change mutual aid can bring—and it offers lessons that still guide organizers elsewhere.

Common Ground began in 2005 as an anarchist collective in the backyard of Malik Rahim, a long-time community organizer and former Black Panther. While Hurricane Katrina still raged, he asked organizers Brandon Darby and scott crow to help him protect himself from White vigilante groups who were roaming the streets. Soon, members of their robust networks were asking how they could help, and the trio was inundated with donations, supplies, and volunteers.

From the outset, Common Ground’s motto was “solidarity, not charity.” It’s a common refrain for mutual aid projects—shorthand for the organizing opportunities crises can present. On the surface, a group’s disaster response might look similar to that of established organizations. After Katrina, for example, the Red Cross served hot meals, while Common Ground delivered groceries to those who needed to replenish their supplies.

Mutual aid groups might even outdo the relief offered by nonprofits and government agencies. Before people began filing FEMA claims, Common Ground was teaching residents how to tarp their roofs and assess wind and flood damage. But those groups also can provide space for deeper conversations about why certain communities are more affected by disaster than others—and build networks to address myriad problems exposed by emergencies.

In New Orleans, many health care facilities closed during the storm, including Charity Hospital, one of the nation’s oldest free hospitals. The hurricane exacerbated the need for health care among low-income people, a famously transient population made all the more vulnerable because of displacement.

Within a month, Common Ground had opened a clinic in a mosque. A wide variety of volunteer healers, including not just doctors but also acupuncturists and other alternative practitioners, provided free health care to a population that, by Rahim’s estimate, was 85% uninsured. Clinic volunteers rode through the community on bicycles asking who needed medical attention and advertising available clinic services, such as vaccines.

I volunteered with Common Ground in October 2005, and I remember one person showing up for a tetanus shot and disclosing he hadn’t seen a doctor in 10 years. While the clinic provided a solution to an immediate need, it also contended with a bigger question: Why is this need so abundant among Black and low-income residents?

On a national scale, COVID-19 is revealing similar racial and economic disparities. Mutual aid groups are coalescing to provide immediate relief: emotional support, financial resources, and even protective gear. But without informed direction, mutual aid disaster relief can be difficult to sustain over the longer term.

That’s what the Common Ground Health Clinic is doing today. While Louisiana is the 25th most populous state, as of April 22 it had the seventh-highest number of COVID-19 deaths in the country, with New Orleans accounting for the majority of them.

The pandemic poses a unique challenge for a medical facility serving low-income people.

“[Our patients] change their phone numbers,” says Common Ground chief executive officer Carleetha Smith, referring to clients who rely on prepaid phones because their incomes or credit histories bar them from stable phone contracts. “They move often. Some of our patients don’t even have a working phone, much less a smartphone.”

Tom Llewellyn, co-producer of The Response, a documentary podcast about community solutions to crises, observes: “A lot of these networks or groups work on things because there’s an acute issue.” Projects have to adapt in order to last beyond the acute need, or they disband.

When I worked with Common Ground after the hurricane, one of the ways the group acquired medicine was by making unofficial arrangements with government agencies—for instance, Army soldiers would smuggle doses to the clinic that they say “fell off the truck.” But if the clinic was going to survive, it needed to develop a reliable operations strategy.

When disaster first strikes, the need for donations and volunteers from outside the area is critical. For a relief effort to persist, however, it needs steady money. It also needs to show potential donors that not only are resources being put to good use, but that there are still needs to address.

The Common Ground collective lasted six years, running the clinic and also offering services, such as tenant organizing and legal aid, which targeted systemic problems faced by an economically disadvantaged population. But in 2011, its outsized ambition, lack of accountability, and a constant influx of itinerant volunteers all contributed to its dissolution. The clinic survived, probably because it was the easiest project to adapt to pre-existing organizational models.

In 2013, the clinic became a Federally Qualified Health Center, which made it eligible for federal funding and opened the door to more grant opportunities. That kind of financial security allowed the clinic to open a second location. Both clinics are able to focus on preventative care and outreach as much as acute treatment.

But many more mutual aid organizations don’t survive that transition.

As a disaster aid group, Occupy Sandy in New York is now defunct. It only held together for about six months after the superstorm hit the U.S. East Coast in October 2012. But those who were involved continue its mission in new ways.

After being involved with Occupy, some residents organized the Worker-Owned Rockaway Cooperatives, which provides its community with the skills, financing, and support to start worker-owned businesses that keep wealth in the neighborhood. The project has helped start three businesses so far.

Nate Kleinman, an Occupy Sandy volunteer who originally came to the project from Philadelphia, says many volunteers who were not from the affected areas have returned to their communities and shifted to developing tech-based mutual aid, such as a new Slack channel for initiatives to address COVID-19.

Kleinman started a nonprofit called the Experimental Farming Network that addresses climate change with sustainable farming. Since the coronavirus outbreak, he’s used organizing skills from Occupy Sandy to create the Cooperative Gardens Commission, from which anyone worried about a breakdown in the food supply chain can learn how to grow their own food and feed their communities.

Lessons learned from Common Ground inform the work of former volunteers such as Jimmy Dunson, who co-founded the Mutual Aid Disaster Relief (MADR) network in 2016. “There’s been a lot of different solidarity-based disaster relief organizations that have been really effective and outperformed the top-down model,” he says. “We wanted to build off that legacy and its successes and avoid the failures.”

MADR’s steering committee has identified some of what works and what doesn’t in disaster relief, and shares a belief that horizontal, community-led organizing is the best response to emergencies. MADR has helped organizers in dozens of cities tackle the effects of wildfires, floods, and now COVID-19.

West Street Recovery, a Houston collective that emerged in the aftermath of Hurricane Harvey in 2017, benefitted from MADR’s guidance. Its founders were local organizers who initially stepped in to help flood victims by delivering meals and supplies to people in hard-to-reach neighborhoods.

But once the water receded and the acute emergency was over, the group shifted to rebuilding, repairing damaged homes, case management, and organizing in more Houston communities. West Street incorporated as a 501(c)3 nonprofit so it could receive larger donations and grants. That transformation also meant the eight core volunteers started receiving paychecks.

Gaining nonprofit status often derails consensus-based decision-making and horizontal organizing—a first step towards assimilating into what many grassroots organizers refer to as the “nonprofit industrial complex,” which West Street’s organizers are determined to avoid.

As West Street’s director of strategic partnerships Ben Hirsch explains, when something is volunteer-run, “Consensus provides a way to keep everyone buying into the project, and it prevents one person’s perspective from dominating.”

When there’s an influx of large tax-deductible donations and grant money, both internal and external pressures can demand accounting for how the money is spent. This can allow old social hierarchies to creep in. West Street Recovery has kept true to its roots and goals with far fewer growing pains, Hirsch says.

“Experienced organizers told us, ‘Don’t fuck with your process,’” Hirsch laughs. “‘Let your process play out.’” That’s how the group built communication and trust among its members.

Like many groups, West Street is learning as it goes how best to respond to COVID-19, but its past experience better positioned it to support its communities, making it easier to identify who is most vulnerable and coordinate regular check-ins or online group activities.

That’s a lesson that the Common Ground clinic embraced, even as it continues to search for the right solutions for its patients. Its history, and the way it’s weathered past challenges, makes Common Ground’s leadership confident it can meet this challenge. 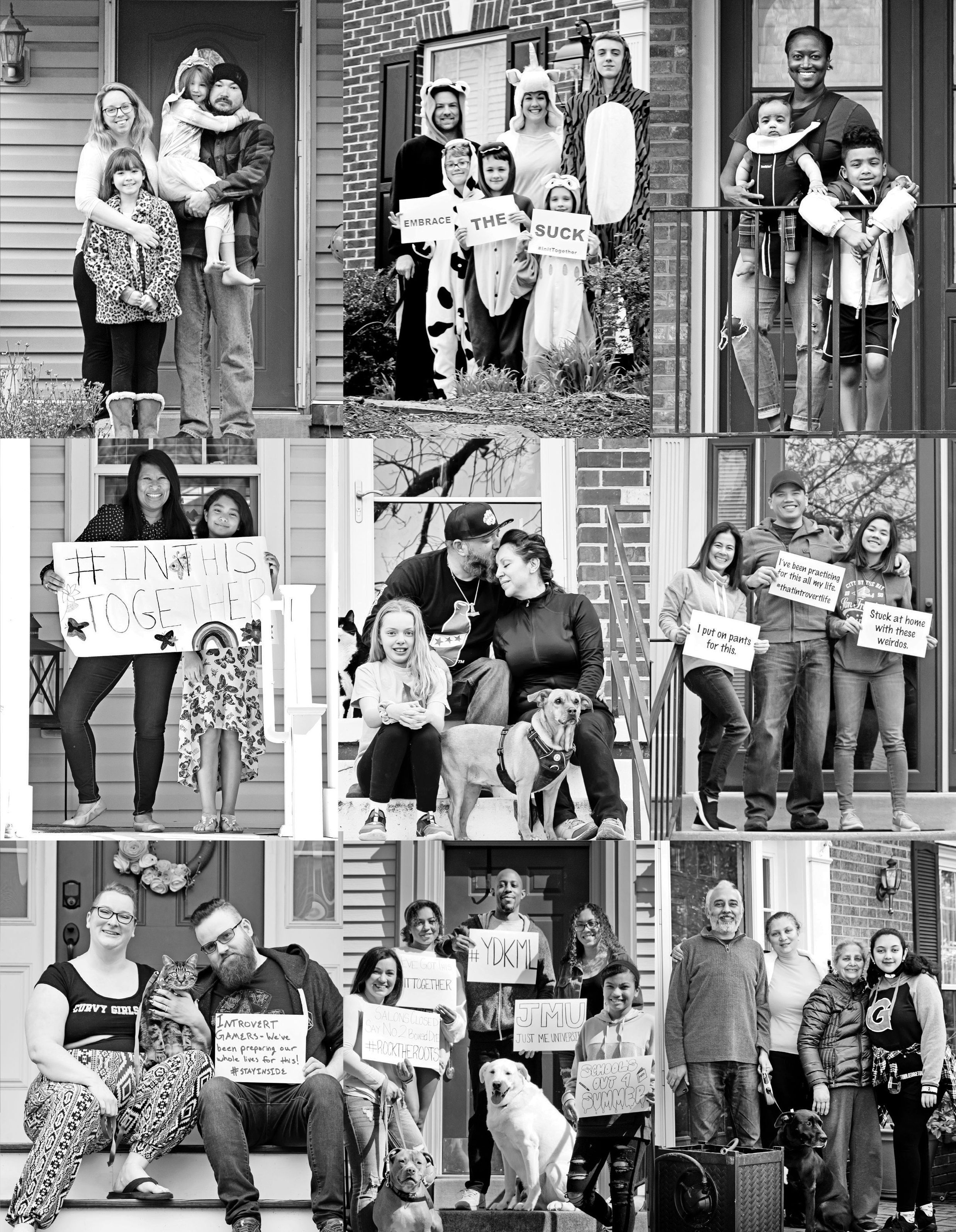