The Good Money Issue: In Depth

The Good Money Issue: In Depth 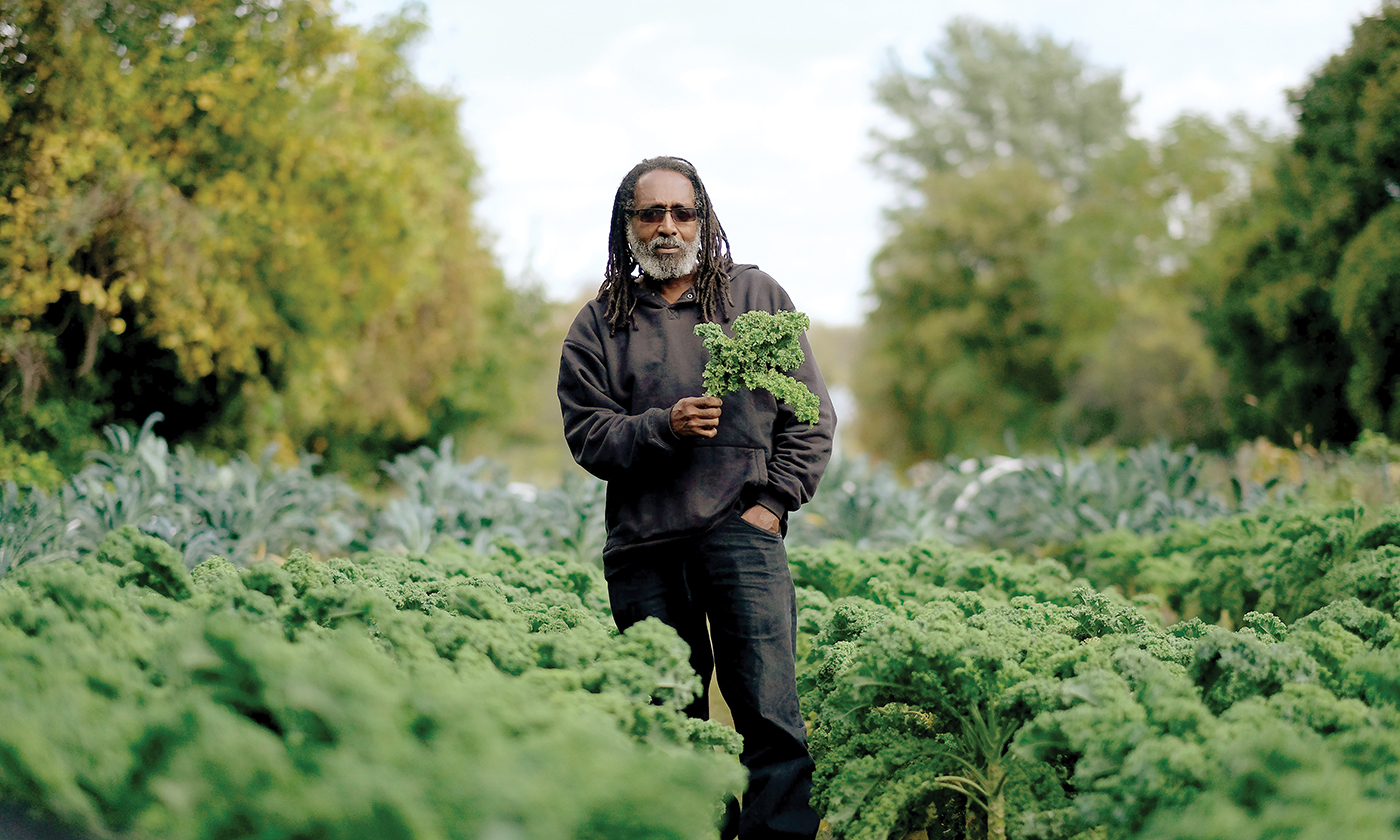 Malik Yakini is executive director of the Detroit Black Community Food Security Network. “This is us latching onto a historical strategy that Black people have used in this country to try to build collective wealth.”

Circulating local dollars can’t create wealth when there’s not enough to begin with.

Residents of one Detroit historic neighborhood have been looking forward to next year’s opening of a food co-op. It will help bring to market produce from a community farm and is part of a larger community development project that will include a health food cafe, an incubator kitchen for food entrepreneurs, and space for events. The project expects to employ 20 people from the mostly low- to moderate-income area.

Twenty jobs may not seem like a lot when unemployment in the approximately 80 percent Black city is 8.7 percent, twice that of state and national rates. But this is what economic progress generally looks like in many Black communities: cooperative ventures such as grocery stores and community farms. More than 150 years ago, Black people emerging from slavery formed cooperatives to grow, sell, and distribute food together because their very survival depended on it.

“Black people have a long history of using co-ops as a way of navigating through an economic system that has been intentionally aimed to disinvest in our communities and prevent any kind of parity,” says Malik Yakini, executive director of the Detroit Black Community Food Security Network, which is spearheading the project. “So, this is us latching onto a historical strategy that Black people have used in this country to try to build collective wealth.”

Yakini believes in the cooperative strategy, and has made it his life’s work of 40-plus years. When he was a college student at Eastern Michigan University in Ypsilanti, he and a group of colleagues started the Ujamaa Co-op Buying Club. “We would come to Detroit on Saturdays, buy in bulk, and bring it back to campus,” Yakini says. “Members—students and faculty—would [then] pick up their baskets.”

The number of Black-owned banks and credit unions continues to dwindle.

Cooperatives are a $500 billion industry, so clearly they have capacity to build wealth. But little of that reaches Black and other marginalized communities. Of the approximately 30,000 co-ops holding 350 million memberships in the United States, only a fraction are Black-owned.

Other efforts aimed at amassing Black dollars have fallen short. The number of Black-owned banks and credit unions continues to dwindle. A decade ago there were more than 50; that number is now down to 23. And Black-owned businesses in general struggle financially.

As much pride and empowerment as there is in community ownership of food-producing gardens and financial services such as credit unions to support local businesses, research shows those sorts of grassroots efforts cannot close the ever-growing wealth gap that has been historically and systematically created along racial lines. Controlling wealth by buying and banking Black is one piece of self-determination, but undoing economic segregation may be a problem too complicated for cooperative ownership alone to solve.

That problem needs a “set of solutions,” Yakini says.

Mehrsa Baradaran’s The Color of Money: Black Banks and the Racial Wealth Gap details the history of Black banking and the laws that have created and continue to sustain separate economies for Black and White Americans.

Baradaran tells the story of the Freedman’s Bank. After the emancipation of enslaved Africans, the bank was established with about $200,000 in unclaimed funds of Black soldiers who had died in the Civil War. Chartered by Congress and operated by White managers, Freedman’s was based on a popular new philanthropic banking model of savings banks for the poor. The purpose of savings banks was to hold money instead of growing it, unlike commercial banks, used by White people, that made loans and investments.

Within a decade, more than 70,000 Freedmen depositors made more than $57 million in deposits. Most of the money was being saved to buy land, tools, and agricultural supplies, as the freed men believed that turning wages into landownership was the way to climb the economic ladder.

The typical Black bank is one-third the size of an average commercial bank.

But the bank closed in 1874 with more than half of the accumulated Black wealth having disappeared through mismanagement and fraud by managers.

The loss of all that capital was something Black populations never recovered from, says Baradaran, who is also a banking law professor at the University of Georgia Law School.

The promise of banking Black is that doing so will keep dollars in Black communities. While that might be theoretically true, Baradaran says, Black banks cannot thrive outside of the mainstream—mostly White—banking system; by default capital filters into it. And because Black banks often serve communities with high rates of poverty, their assets are smaller. The typical Black bank is one-third the size of an average commercial bank, as measured by assets, and one-quarter to one-third as profitable.

“These banks have been used by policymakers … presidents, and their administrations as cheap alternatives to land and reparations,” Baradaran says.

“The racial wealth gap is a byproduct of years, even centuries of economic policy choices and decisions that benefited the economic status and wealth-building potential of White households that has been compounded over time,” says Emanuel Nieves, senior policy manager at Prosperity Now, an organization with a mission of financial stability for all.

“It’s absolutely going to take more than the grassroots efforts [to close it].”

The only “logical” path is through policy intervention, says Nieves, one of the authors of the 2017 report, “The Road to Zero Wealth: How the Racial Wealth Divide Is Hollowing Out America’s Middle Class.” It lays out the magnitude of racial wealth disparity and suggests policy interventions to address the growing crisis.

Nieves says the reason policy is important is because the gap is too large to be closed by the private sector alone.

Baradaran explains it like this: Banks make money from loans and investments, not deposits. Even if affluent White—or Black—people decided to open accounts in a Black bank in a less affluent Black community, the money still would not get to the people who need it most.

The very problem that the banks exist to help makes them vulnerable.

“People don’t understand the difference between deposits and loans,” Baradaran says. “Loans are what create wealth, not deposits. So you can give a bank deposits, but the bank isn’t lending into wealth-creating houses. And they can’t because they don’t have the dollars. What banks need is capital … good loan potential.”

Then the loans have to be paid back.

But the bank customers in marginalized communities don’t have the money to pay back the money, let alone the interest. And so the very problem that the banks exist to help makes them vulnerable.

One solution may exist within the Federal Housing Administration, which offers down-payment assistance to low-income people and can provide the kind of guarantees on low-interest loans to Black borrowers that enable banks to lend more freely.

“It’s not impossible,” Baradaran says. “We did it for White Americans. Before the New Deal, we had a ton of poor White Americans who, because of the FHA loans, it became cheaper for them to buy a home and have a mortgage than to rent an apartment. And so those people all moved into the suburbs and started paying very little mortgage, and that’s what built White American wealth.”

Baradaran points out that before the mortgage program made them wealthy, or at least middle class, many—maybe most—Whites suffered the same fate as Black people. But where they were elevated, “Black people were cut off” through the FHA policy of redlining—the practice of denying loans in predominantly Black neighborhoods.

A food co-op is scheduled to open next year. YES! Photo by Brian Rozman.

There are opportunities now to correct that, Nieves says. And no shortage of ideas for reparative policies that could shift capital into Black communities.

In the “Road to Zero Wealth” report, Nieves and the others suggest, among other things, changes to the tax code to “stop subsidizing the already-wealthy.” They believe that reforming the mortgage interest deduction and other tax expenditures would strengthen and grow the federal estate tax and create a net-worth tax on multimillion dollar fortunes—freeing up funds for investment in opportunities that allow low-wealth families to build wealth.

Other suggestions have included issuing Baby Bonds—government trust accounts given to babies, based on a family’s household wealth. Economist Darrick Hamilton has presented the concept to members of Congress. While not race-specific, Baby Bonds would give an advantage to Black and Brown children and would be used for a “clearly defined asset-enhancing activity,” such as financing a debt-free education, buying a home, or purchasing a business.

Nieves, Baradaran, and Hamilton posit that without policies like these that redistribute capital into Black and Brown communities, people will at best merely continue to circulate the same meager dollars for generations to come—no matter how many local cooperatives and credit unions they have.

And while policymakers argue the politics of wealth redistribution and the details of implementation, lack of capital continues to present challenges for local-economy organizers such as Yakini and the Detroit Black Community Food Security Network.

Obtaining capital is always a challenge, he said, particularly large amounts of capital that can make a big difference in people’s lives.

In recent years, he says, smaller pots in the amounts of $5,000 to maybe $50,000 from philanthropic foundations have opened up. But these are often framed within a competition for one project over others.

If the racial wealth divide is left unaddressed, median Black household wealth will hit zero by 2053, a decade or so after households of color reach a majority in this country.

“You have to compete against other people [in the same financial position]. It pits people against each other,” Yakini says. “But the larger amounts that are really needed to really do large-scale development, to compete on any level with the development we see happening in the city of Detroit, requires multimillions of dollars.”

And for those large grants, grantors want to give money to the group that has the “best capacity” to manage the funds. And that’s when the racial divide kicks in once again.

“Because of historical inequity, and historical underdevelopment which has occurred in Black communities and Brown communities, often we don’t have the mechanisms in place to handle large grants, like a large White nonprofit that’s been around for 20 years might have,” Yakini says. “And so, if the grantor is looking at who has the most capacity, then invariably more established White nonprofits have that capacity over smaller emerging groups.”

And while this may not be intended to function in such a way, certainly the impact is that it concentrates wealth in the hands of Whites, the very problem that these grassroots efforts are trying to solve.

“As I’ve gotten older, I’ve moved away from straight-line thinking,” Yakini says. “The world is very complicated, and trying to create justice in a system where you have hundreds of years of injustice happening on multiple levels in multiple ways, there’s not any one thing that’s going to solve that.”

The smaller projects—planting gardens, building wells—he believes, get people to think about how they act on their own behalf, how they create smaller economies. “When an economy is smaller and more local, people by definition in that locale have more say-so over it, presumably.”

Ultimately, he says, it can give people glimpses into the future to ignite within their consciousness what’s possible.

And so, Yakini says, he’s receptive to all solutions that work—from grassroots to government.

“We have to fight on all these fronts,” he says. “The question is how we build the vehicles that are sophisticated enough to function on all of these levels.”