A sensible drug policy would address the reasons many of us use drugs in the first place: We enjoy them.

Why you can trust us
By Jay Shifman
8 MIN READ

I remember this moment so clearly. It was the fall of 2008, roughly nine months before I hit the lowest point in my struggles with prescription pill addiction, decided life wasn’t worth the hurt, and succeeded in sending myself into an overdose I hoped would end my life. It was also mere weeks before our country elected its first Black president, a night I’d celebrate by smoking copious amounts of weed out of a coconut bong with my diverse set of “roommates”—a word I use quotes around because when you own a trap house, no one is ever an official resident.

But on this day in question, I was defending my marijuana use to my increasingly worried parents. I was 22 and smoking enough weed daily to make Seth Rogen blanch. But I was doing it for the same reason that has driven the legalization of medical cannabis in 37 states: It made me feel better, just short of good. My struggle, mostly with benzodiazepines, left me living in such a sickly state that cannabis was one of the few surefire cures for feeling like I was five nights into a weeklong tequila bender every day of my life.

Of course, most people didn’t want to hear my excuse. They simply didn’t understand me, as if I was trying to convince them that coffee made me sleepy. Weed is a drug, after all. And my pills were prescribed by a psychiatrist—clearly that made them a positive part of my life. On the other hand, my parents, and many others as well, insisted weed was bad, end of discussion, and I needed to stop smoking it that instant.

There’s a word for when the enforced sensitivity around a topic allows, or even encourages, truth to be replaced with a comfortable fiction, when ignorant silence is elevated over the freedom of nuanced thought and shame is substituted for support. That word is stigma. And nowhere is it more alive than in the way we talk about drug use and treat drug users.

Without knowing its name, I wrestled with stigma for years during my struggles with substance misuse, and I continue to wrestle with it today as an out-in-the-open drug user and someone who educates on the topics of drug use and addiction. Stigma is even present in the world of recovery; too often, people like me—in recovery from a struggle with a particular substance but not completely sober—are regarded as “not in recovery” by purists and looked down on as liars. But the bigger issue remains: 12 years into recovery from my pill addiction, what has always stayed with me is that startling contradiction between how those in my life regarded my use of pharmaceuticals versus cannabis.

Over the last decade-plus, this paradox has become even more mainstream. We’ve had an abundance of stories highlighting the dangers in over-prescribing pills, especially opioids, without properly educating patients on the possible negative effects of pharmaceutical use. We’ve even had this genuine concern inflated into a good ol’ fashioned moral panic, one whose name, the “opioid crisis,” is on the lips of every soccer mom and sheriff in the country.

This particular moral panic has thrived despite the fact that our hardworking drug use and addiction researchers and advocates agree that this is, in fact, an overdose crisis, of which opioids are merely one factor, and referring to the entire thing as the “opioid crisis” is akin to calling a sandwich “bread.” It’s a convenient oversimplification, which isn’t surprising; as with every moral panic, we love to reduce complex problems to a single scapegoat.

But what really gets me is how infrequently I’ve heard anyone, from boardrooms to the halls of Congress, say those three words that all of us who suffered the consequences of their recklessness long to hear: “I was wrong.” And I count myself among those who have been wronged by the system, not just because of my struggle with addiction, but also because of my repeated experiences with our justice system over the same pleasure-inducing plant that is now recognized as medication in a majority of states in this country.

You’d think, given that glaring paradox, that we’d have heard numerous apologies, even the surface-level political kind. Alas, we have not. Somehow, we went from Reefer Madness to Gwyneth Paltrow, Cannabis Entrepreneur, while Big Pharma stole Big Tobacco’s Public Enemy No. 1 crown and ran with it to even higher levels of moral panic.

In fact, while legal cannabis has become a $30 billion industry in the U.S. alone, more than 80% of these businesses are controlled by white people (largely the same men who would have called me a junkie 12 years ago). Meanwhile, arrests for drugs have roughly stayed the same over the past decade, and those arrested are disproportionately people of color. As an experienced drug user and someone who used to struggle with addiction, I recognize this sort of high-chasing behavior exhibited by our criminal justice system all too well.

The stigma around drug use, however, is seen just as clearly outside its criminal justice and business implications. Even now, the word “pleasure” and its attached significance are conspicuously absent from our conversations around drugs. While we debate the merits of regulating opioid prescriptions and the many successful campaigns to legalize drugs for therapeutic use, the simple and all-too-human use of drugs for their ecstasy-inducing quality is relegated to the underground, a space reserved for hippies, scofflaws, and everyone in between. While a vast majority of people who use drugs do so for pleasure, they have no seat at the table where decisions are made about their acceptable use.

Why is that? In a society where death-defying activity is, while maybe not commonplace, at least accepted in recreational pursuits like bungee jumping, skydiving, and other extreme activities, and inviting bodily harm is appreciated as entertainment in sport (MMA, NASCAR, NFL), admitting something so banal as finding pleasure in drug use is oddly regarded as taboo, akin to inviting your in-laws to a nudist retreat. And it’s been that way since the late 19th century, when a concerted effort began to connect certain drugs and their use to people deemed undesirable—namely, people of color and immigrants.

Naturally the substances preferred by the ruling class weren’t subjected to these policies born of racism and lies, which is why breweries remain popular (more on that in a minute) and you can buy a pack of cigarettes at the bodega on the corner. Meanwhile, it’s easier to believe the idea that drugs like heroin and meth can never be enjoyed safely, despite repeated research studies showing that safe use is indeed possible. A few recent bestselling books have attempted to dispel these myths, including those by Columbia University’s Carl Hart and the journalists Johann Hari and Maia Szalavitz.

To be clear, it doesn’t have to be this way. In fact, there’s never been a better time to rip off the Band-Aid of our draconian drug policies and see them for what they are: untruths grounded in racism that do nothing to keep people safe and only serve to stigmatize those who use drugs—both legal and illegal—to add pleasure to their lives. These are people like me and, if the statistics are to be believed, nearly 60% of the population of this country.

Our bungling drug policies are, at this point, more than four generations old, and have included such performative and misguided educational programs as D.A.R.E. and Just Say No. It’s not surprising that it’s difficult for many of us to imagine any alternatives. We like to think that the United States sets the example and the rest of the world follows. While this is sometimes the truth, it’s not the case everywhere. In fact, when it comes to recognizing even the most basic humanity of people who choose to enjoy the pleasures of drug use, numerous countries long ago left us in the dust.

There are currently nearly 200 overdose prevention sites (often called safe use sites) in 15 countries around the world, a figure that only recently expanded to include the first such facility in the U.S., OnPoint NYC, which opened in New York City in 2021. Famously, Portugal decriminalized all drug use in 2001; as a result, both its overdose rate and drug-related crime statistics fell precipitously. Further, Spain has never had any sort of widespread anti-drug laws, and, as Carl Hart reported in his book Drug Use for Grown-Ups: Chasing Liberty in the Land of Fear, its citizens are often puzzled by the ineffectual yet draconian policies of the U.S.

To use an example a bit closer to home, in 1917, the U.S. notoriously tried to eradicate its then-most-popular drug, alcohol, and saw catastrophic results, including a rise in organized crime and deaths from tainted bootleg products. In 1933, in a rare moment of radical honesty, we did something our country is downright rotten at: We admitted we’d made a mistake, and repealed the 18th Amendment with the 21st. Our great-grandparents took that profound step with humility and a desire to correct the wrongs of the past, which means we can too. But it won’t be easy.

We need to shake off our blinders and see the untruths, both intentional and unintentional, we’ve swallowed wholesale over the years. We need to mindfully probe what we think we “know” about drugs and those who enjoy their use, just as I did when I was five years into recovery yet still found myself picturing the same harmful stereotype when someone said the word “addict.” It will take us each accepting our own drug use, whether it’s marijuana, martinis, or meth, as the norm and not the exception. It will take us seeing the humanity in each other when we’re being taught to only see monsters.

But there is hope, and we see it every day. It’s all around us, in our homes, on billboards, in commercials, and in recreational facilities all around the country. Even now, as I write this, I sit in what can easily be called a safe use site for a certain intoxicating and pleasure-inducing substance, a place that’s halfway up Atlantic Avenue, between Boerum Place and Court Street in Brooklyn. You wouldn’t know it’s a safe use site because there’s no wall of protesters outside. No members of the media have called the owner, asking him to respond to criticism that he’s just enabling drug users. There is government oversight, but it’s the kind that a simple form and knowing the right person can easily negotiate. And we even have a special name for these locations. We call them bars, an old English word that has long been associated with sin.

Yes, alcohol has seen its fair share of stigma, but—in what gives hope to people like me who long for a future where drug users can emerge from the shadows—the stigma around this particular drug has ebbed over time, giving way to common sense: Keep it out of the hands of kids and those about to handle heavy machinery, but otherwise let people live and, as our founding document promises, pursue happiness. It’s moments like this, sitting here in this bar, that I dare to dream of a safer future for open drug users like myself. Maybe one day we, like the Dutch, can sit in a coffee shop and share a tea made from psilocybin mushrooms and experience the blissful pleasure that comes with that euphoric delight. What a day that will be. 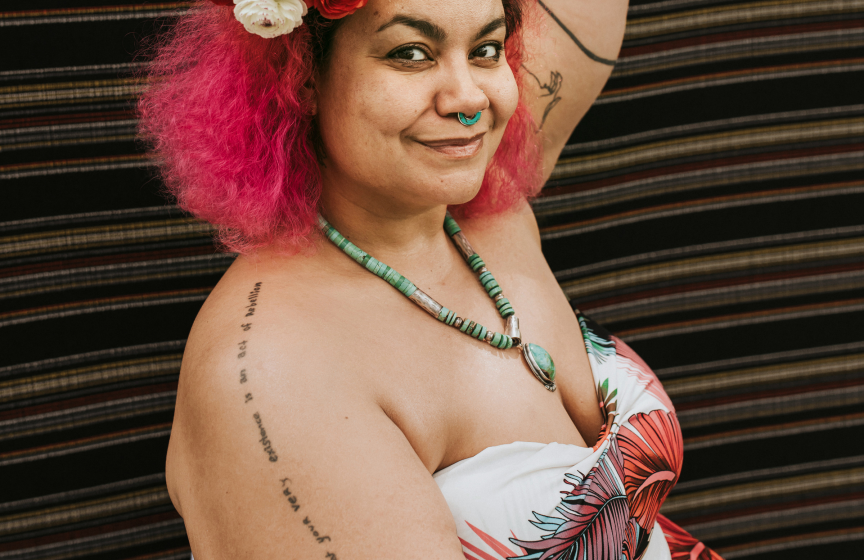