Love Letters to the Resistance

So many people wanted—needed, even—to channel their energy into something positive after the election. For the collected authors in Radical Hope, letter writing to loved ones was a way to do that.

Love Letters to the Resistance

More than 30 writers send messages of hope to loved ones in the time of Trump.

Why you can trust us
By Aura Bogado
4 MIN READ

While some accepted the news of Trump’s victory almost immediately on Election Day, the result hit others in waves of grief. Over the days, weeks, and months that followed, initial denial has yielded to belief—often dotted with moments of disbelief, reserved for times when the president says or does something that was previously unimaginable. Disappointment remains. And, for many, so does fear.

What words would you find to communicate any sense of critical optimism to a loved one right now? Radical Hope: Letters of Love and Dissent in Dangerous Times gleans written messages from more than 30 writers to grandparents, children, strangers, and entire generations.

Carolina de Robertis, the editor of Radical Hope, writes that she was thinking about you a few days after the election. You, the person reading this. You, the person who not only survived Election Day, but also the inauguration and the sweeping changes that have taken place since. You, the person who might still feel hopeless but is nevertheless reading a review of a book about hope. De Robertis was writing to me, too. This was published with all of us in mind.

“[W]hat could we do, what must we do,” de Robertis wondered shortly after the election, writing in the introduction about how to get through the new threats facing vulnerable communities. She got to work right away, reaching out to writers for what was then a vague vision to collect “love letters in response to these political times.” She was stunned and humbled by the responses she received, remarking that the letters create “a collective mirror of precisely what makes this society strong and beautiful.”

It makes sense: So many people wanted—needed, even—to channel their energy into something positive after the election. For the collected authors in Radical Hope, letter writing to loved ones was a way to do that.

In these letters, writers dive into personal and historical origins to search for hope. In the section called “Roots,” you’ll read letters that point to history and how we got here. Alicia Garza, who helped found Black Lives Matter, writes to “Mama Harriet”—the woman who founded the Underground Railroad. Jewelle Gomez, the author and playwright, writes to her maternal great-grandmother. Others write not only to elders past, but also to children and grandchildren. The letters are tender in a way letters to loved ones tend to be—while acknowledging the urgency of this moment.

The ability to write what de Robertis describes in the opening as an “essay in letter form”—that gift of including personal details while also knowing there’s a bigger audience—is the thread that weaves Radical Hope together. These essays are personal. That’s the beauty of the epistolary form: The writers share their vulnerability because they trust the letters’ audience. These letter writers trust that we’ll find hope in their words. 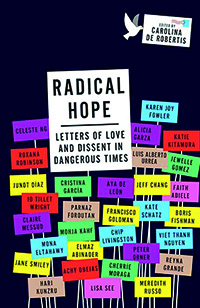 This collection also invites you, dear reader, to participate in creating hope. In the section called “Branches,” you’re made conscious of your participation in this book. Cherríe Moraga, for example, addresses the book’s audience directly: “Dear ‘Radically Hopeful’ Artist.”

At this point I realized that, despite my cynicism, I’m still a radically hopeful person—it would make little sense otherwise to read these letters. So I went back to letters I’d already read, and I noted the intentional ambiguity with which some of the letters are addressed. Many of the letters invite participation. These writers have placed a hope in the readers that we will, in turn, take away some hope from the letters. It’s an engaging process that’s made whole when we, as readers, do find some hope.

And these letters invite us to find personal connections between ourselves and the strangers to whom these letters are addressed. In one letter, Elmaz Abinader, an author who founded Voices of Our Nations Arts Foundation, writes to a woman who stood in front of her in line at the grocery store. Abinader overheard pieces of this stranger’s conversation: torture, jail, Buenos Aires. Abinader imagines the woman survived torture under Argentina’s military dictatorship several decades ago. “You are ahead of me,” she writes, describing the stranger’s physical location in line. But the text also signals that this woman is a survivor of the kind of dictatorship and torture many fear will occur in the Trump administration. By having survived something like it, she’s ahead of that experience.

There’s something devastating about Abinader’s letter in Radical Hope. The stranger in line isn’t the only woman she addresses. Defying time and space, Abinader writes to her grandmother who escaped Lebanon more than 100 years ago. She writes to countless women she’s encountered who’ve survived searches, checkpoints, and despots. She writes to so many women that it creates a shared sense of familiarity among all women who’ve experienced injustice.

“Many of us have not learned how to lose something,” Abinader writes. These women in line know about profound loss. And how to survive it.

Last, these letters address the future. In the section called “Seeds,” writers try to envision a hopeful future despite the political and social turmoil of the present. It’s here that you’ll read Meredith Russo’s letter to her child. “I am not ashamed to admit I am more afraid than ever,” the transgender novelist writes.

Russo’s honesty—that she’s worked to make a better world than the one she grew up with, but that her “hope was misplaced”—is as candid as it is compassionate. You may find tears in your eyes, and you may have to clear your throat as you’ve learned to do so many times under the Trump administration.

What makes the letters in Radical Hope powerful is the way they’re rooted in reality. The writers don’t turn from this moment, but instead accept it and its infinite challenges, just as they understand the past and its persistent legacies. The words here are often written to people we’ll never meet but whose obstacles we already share. There’s hope in imagining we’ll see a different day, together.