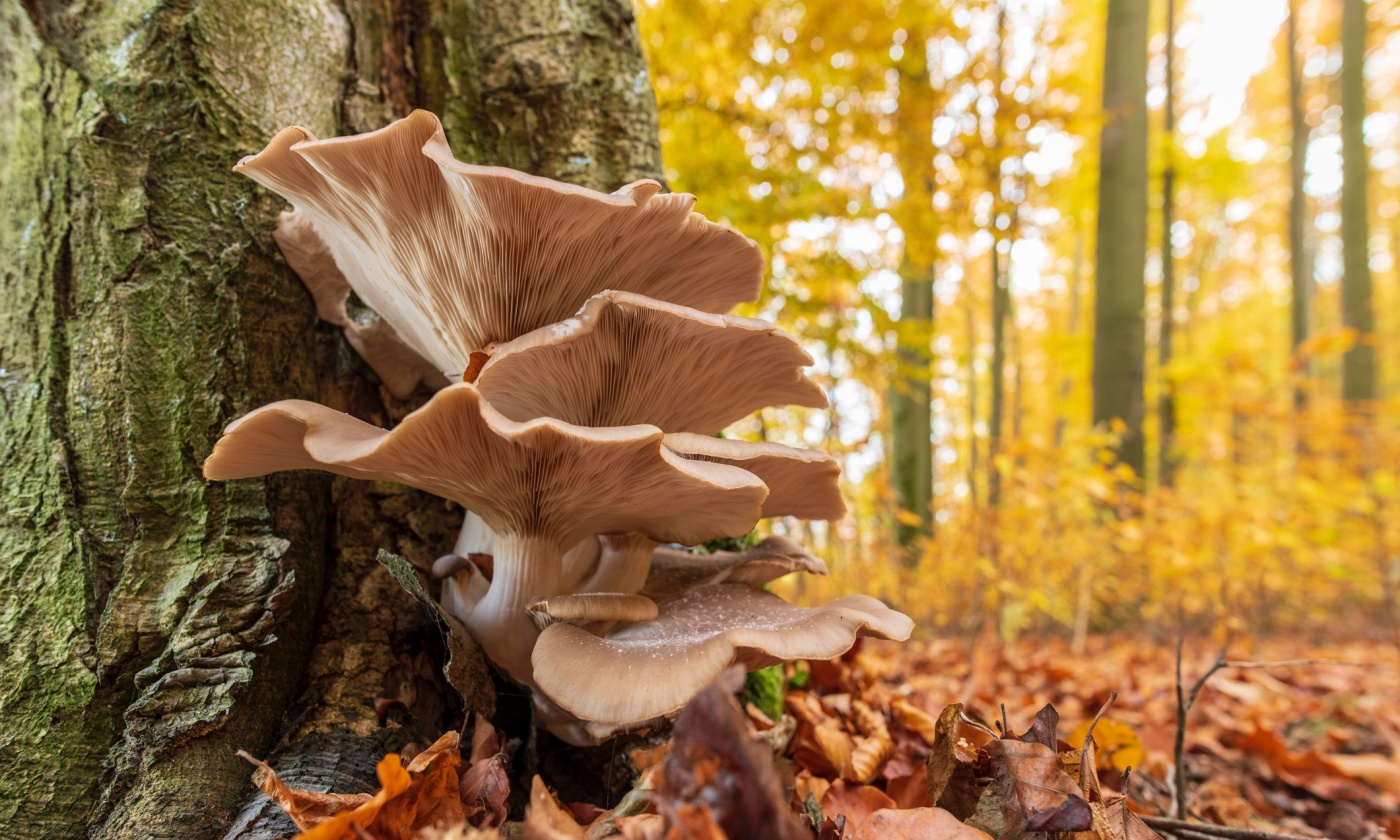 Research suggests mushrooms can convert pesticides and herbicides to more innocuous compounds, remove heavy metals from brownfield sites, and break down plastic. They have even been used to remove and recover heavy metals from contaminated water.

When wildfires burned across Northern California in October 2017, they killed at least 43 people and displaced another 100,000. The human toll alone was dire, but the fires also left behind a toxic mess. It wasn’t just the record-breaking levels of air pollution. The blazes generated an untold amount of potentially dangerous ash, the remains of incinerated hazardous household waste and building materials. The charred detritus of paint, pesticides, cleaning products, electronics, pressure-treated wood, and propane tanks left a range of pollutants in the soil—including arsenic, asbestos, copper, hexavalent chromium, lead, and zinc.

Officials feared runoff from the toxic ash could pollute local creeks once the rainy season hit, potentially tainting the drinking water supply for the region’s 700,000 residents.

In the aftermath of the fires, federal and state workers removed much of the toxic debris. But then, in Sonoma County, a coalition of fire remediation experts, local businesses, and ecological activists mobilized to cleanse the foundations of burned-out buildings with … mushrooms. The Fire Remediation Action Coalition placed more than 40 miles of wattles—straw-filled, snakelike tubes designed to prevent erosion—inoculated with oyster mushrooms around parking lots, along roads, and across hillsides.

Their plan? The tubes would provide makeshift channels, diverting runoff from sensitive waterways. The mushrooms would do the rest.

The volunteers, led by Sebastopol-based landscape professional Erik Ohlsen, are advocates for “mycoremediation,” an experimental bioremediation technique that uses mushrooms to clean up hazardous waste, harnessing their natural ability to use enzymes to break down foreign substances.

In the last 15 years, fungi enthusiasts and so-called “citizen scientists” have deployed mushrooms to clean up oil spills in the Amazon, boat fuel pollution in Denmark, contaminated soil in New Zealand, and polychlorinated biphenyls, more commonly known as PCBs, in Washington state’s Spokane River. Research suggests mushrooms can convert pesticides and herbicides to more innocuous compounds, remove heavy metals from brownfield sites, and break down plastic. They have even been used to remove and recover heavy metals from contaminated water.

It’s the root mycelia that do all the work, says Daniel Reyes, founder of the Austin, Texas-based science and education company MycoAlliance, referring to the threadlike network of roots that connect species of fungi. “Compared to an apple tree, the mushroom we see growing above ground is the apple, and the mycelium is the tree itself. Mycologists focus on the mycelium,” he says.

Mycelia consume their food externally, by secreting powerful enzymes that break down molecules. In other words, they “digest” whatever substrate, or surface, they’re growing on, converting it to nutrients and—depending on the substrate—edible mushrooms.

Proponents say it’s a natural, more benign, and potentially cheaper alternative to the “scrape-and-burn” approach to environmental cleanup, which involves digging up contaminated soil and incinerating it.

The problem with that traditional approach is that it can remove potentially fertile topsoil, says Theresa Halula, who teaches mushroom cultivation at Merritt College in Oakland, California. Mycoremediation, on the other hand, she says, can help clean up toxic sites while actually improving soil fertility.

So why isn’t mycoremediation a more common practice?

Current mycoremediation solutions simply work too slowly to be embraced on an industrial scale.

One reason, Halula says, is that federal regulations require the removal of 100 percent of targeted contaminants within a short time frame. Current mycoremediation solutions simply work too slowly to be embraced on an industrial scale. “In nature, mushrooms break down all kinds of substances, and we’re just beginning to look at this more closely in the lab and in field studies,” she says. “But we don’t yet know the speed of the breakdown, and how effective that breakdown is.”

As a result, most mycoremediation projects are undertaken at the local level, like the Sonoma County project.

“Mycology is very neglected as a science, and mycoremediation is currently very site-specific,” says Peter McCoy, a self-trained mycologist viewed by many of his adherents as a founder of the radical mycology movement. (His book, Radical Mycology: A Treatise on Seeing and Working With Fungi, helped give the movement its name.) McCoy says there’s no one-size-fits-all method for applying mushrooms to biohazard sites. Reactions vary depending on species of mushroom, contaminants present, and local growing conditions, which means treatments must be customized and that further exploration is likely necessary.

“Hopefully, we’ll develop enough anecdotal evidence for certain common pollution scenarios that we can build off-the-shelf protocols. But we’re not there yet,” McCoy says.

Like other subfields of bioremediation, mycoremediation has failed to attract much investment. “This is an inherent problem in the bioremediation industry,” says William Mohn, a microbiologist at the University of British Columbia who specializes in microbial degradation. “We are not producing a product that people want to buy. We are producing something that companies are sometimes forced to do. It’s hard to make a great business case for it. Or, quite frankly, a case for academic research.”

Funding is so hard to come by, Mohn says, that he left the bioremediation field. “It’s easier to find funding for other types of research,” he says.

That means, as McCoy puts it, “it falls on citizen scientists and garage researchers to do the work.”

Some of those citizen scientists are recruited by Tradd Cotter, a microbiologist who travels the country spreading the gospel of mycoremediation. “I tell people that the first thing we have to do is find mushrooms that break down the stuff we want to break down. And when we find mushrooms doing extraordinary things, we want to clone them,” he says.

During one of his presentations, a participant said he had seen a mushroom growing on a bowling ball. Cotter asked the class, “Is this a mushroom we want to study, and why?” A young boy piped up to say, “Yes! Because it eats plastic!”

A DIY spirit of informality pervades mycology culture, in part by disposition and in part because there is no other choice.

Cotter, who runs Mushroom Mountain research lab in South Carolina, says he receives packages almost every week—usually dried mushrooms along with letters describing where they were found—from people hoping to contribute to his research. “There are thousands of people out looking for mushrooms doing strange things. People really do want to help. It gives them a sense that they are contributing, even if they’re not a microbiologist.”

He likens effective mushrooms to janitors with giant sets of keys—enzymes—that break down molecules. “If you have one key, you might be a mushroom that will only grow on a very specific type of wood. Another mushroom from the same species could have a huge key set—perhaps it can grow on oak, plastic, or oil,” Cotter says. “We want to screen the fungi with huge key sets to see what they can eat: oil, herbicides, insecticides, and synthetic compounds.”

Beyond the work being done in these independent labs, enthusiastic amateurs are conducting their own projects in the field. According to Cotter’s lab partner, Leif Olson, “It’s happening out of necessity. People see all these environmental issues, and they want to do something about it. They hear that oyster mushroom mycelia can clean contaminated water, and they are eager to practice this knowledge.”

McCoy founded the Radical Mycology Mycelial Network, an online community of so-called “mycoevangelists,” in an attempt to harness that enthusiasm. Members exchange information, uploading geotagged photos of mushrooms taken in the wild for public research. While the decentralized nature of the group makes it difficult to gauge the size of the community, McCoy’s Mycelial Network contact page lists groups in California, North Carolina, and Washington state; “nodes” in the U.S., Canada, and United Kingdom; and “hyphal tips” of individual mycoevangelists in 14 states. Sometimes, they even get together in person. This past summer a group of over 600 radical mycologists gathered in the hills of rural Oregon to talk mushrooms, share knowledge, and, as New Food Economy contributor Doug Bierend put it, generally “let their fungus flags fly.”

Despite their zeal, many fungi enthusiasts treat empirical design and data collection as an afterthought. In its December 2018 progress report, Fire Remediation Action Coalition’s Ohlsen said that the team didn’t take the time to implement scientific design principles, such as setting up control areas, measuring pretreatment toxin levels, or developing and following protocols like measuring and controlling the amount of mycelia in each wattle. Furthermore, the volunteers were not trained scientists, and the coalition didn’t have the resources to design and conduct a scientifically valid study.

In other words, a DIY spirit of informality pervades mycology culture, in part by disposition and in part because there is no other choice. But if the movement is going to realize its potential, its loose community of adherents may need to find ways to formalize their work.

Ohlsen expressed the hope that more scientists will bring empirical design expertise to future mycoremediation projects and encouraged nearby communities to start planning now for the next wildfire season so that data collection can be cemented into future fire remediation protocols. Unfortunately, he predicts, coming fire seasons will provide plenty of “tragic opportunities” to do so.

The New Planetary Health Diet Promises to Save the Earth. So I Tried It for a Week

Pollution Doesn’t Stand a Chance Against This Living Technology