The Deal That Brought the Colorado River Back to the Sea 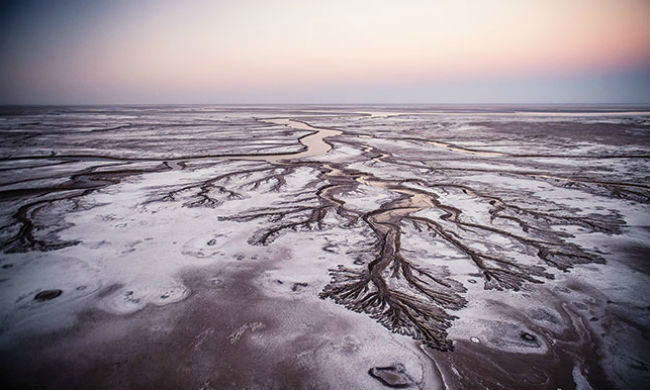 Salt deposits cover the vast Colorado River Delta. When water was flowing regularly, this region was green and fertile. Photo by Nick Hall.

The Deal That Brought the Colorado River Back to the Sea

A new amendment to the 1944 water treaty between Mexico and the United States aims to create a fair, cooperative system for restoring the Colorado River.

Why you can trust us
By Diondra Powers
4 MIN READ

For eight glorious weeks, from March 23 to May 18, 2014, the Colorado River flowed all the way to the Gulf of California, something it hasn’t done regularly since the 1930s. Minute 319, a 2012 amendment to the 1944 water treaty between Mexico and the United States, allowed water from the Morelos Dam to run through a 40-mile stretch of parched riverbed to the Colorado River Delta. Scientists designed a “pulse flow” to release 105,392 acre-feet of water to mimic spring floods and “base flows,” which will continue until the measure expires in 2017. The long-term goal of Minute 319 is to create a cooperative system whereby both nations can share the Colorado River for water storage and ecological restoration research. “We’re never going to get back to a condition where the delta was like it was in the 1930s before the Hoover Dam went up,” said Karl Flessa, a lead scientist on the binational research team. But if the project were extended to allow more flows, we could see “a whole series of narrow parks of native vegetation and native trees and native birds,” he said.

Scientists observed increased numbers of delta birds: raptors around the basin, migratory birds, and even birds normally associated with agricultural growth and urban development. Osvel Hinojosa Huerta, director of the Water and Wetlands Program at Pronatura Noroeste in Mexico and co-chair of the Minute 319 environmental flows team, is helping monitor the wildlife response to the release. “As soon as we released [the pulse flow], the river came back,” Hinojosa Huerta said. “And this was in the spring, late March, so it was in the middle of the migration season.” Stopover sites like the delta are critical for the survival of migrating birds, which breed as far north as Canada and Alaska and winter as far south as Central America. “The migrating birds saw this new habitat, this new opportunity for use and rest.”

The gates of Morelos Dam on the Arizona-Mexico border were lifted to allow a “pulse flow” of water into the final stretch of the Colorado River. Photo by Nick Hall.

2) A Fairer Role for Mexico

The original 1944 water treaty stipulated an annual 1.5 million acre-feet allowance of water for Mexico, but that water had to be used immediately because Mexico didn’t have much infrastructure to store water. The Minute 319 amendment provided Mexico a long-needed water storage area: Lake Mead, the largest reservoir in the United States, located on the edge of Nevada and Arizona. It is a crucial concession, especially during droughts. “The main benefit is this collaboration to prevent a water crisis,” said Hinojosa Huerta. “Before Minute 319, Mexico had no participation at all in how the river was managed data-wise.” Now Mexico is a partner in management of the watershed. “Minute 319’s really changed the concept of how we are approaching water management.”

In recent decades, the river channel and its immediate floodplain have been devoid of greenery. This new inflow of water, however, caused some native tree seeds, such as cottonwoods and willows, to germinate. While most of the saplings didn’t survive long after the pulse flow period, some did, proving the ground is still fertile under the right conditions. Karen Schlatter, project manager for the Colorado River Delta Program at the Sonoran Institute, said the highest germination of native plant species occurred in the central delta, largely due to the preparation of the land before the pulse flow came through.

On its way to the Sea of Cortez the leading edge of the Minute 319 Colorado River “pulse flow” ran through river channels that had been dry for decades. Photo by Nick Hall.

Once the water was released from the Morelos Dam, it had to flow down some extremely dry channels, said Eloise Kendy, a hydrologist with The Nature Conservancy who also worked on the project. “It’s dry down to 50 feet,” she said. Because this bone-dry stretch of the river hasn’t seen a consistent flow for nearly a century, a lot of the water from the flow sank into the riverbed before continuing downstream. Scientists had to coax the water along using irrigation canals and alternating flows.

5) A Glimpse of the Past

Younger generations of Mexicans know only the barren riverbeds below the dam, and older generations haven’t seen water flowing down to the delta in decades. “There was tremendous community response in Mexico,” said Jennifer Pitt, director of the Colorado River Project for the Environmental Defense Fund. Pitt saw the celebrations firsthand. During the eight-week flow, impromptu carnivals and markets popped up riverside. People flocked to the river, she said, recognizing “an opportunity to participate in an event where big institutional players were giving something back to the environment.”