What Would Nature Do? Not Wall Street

“For a surprisingly long time, we humans have successfully maintained the illusion that we are outside of, superior to, and not subject to the rules of nature.”

What Would Nature Do? Not Wall Street

Models for a healthy down-to-earth economy are all around us.

Why you can trust us
By David Korten
6 MIN READ

With proper care and respect, Earth can provide a high quality of life for all people in perpetuity. Yet we devastate productive lands and waters for a quick profit, a few temporary jobs, or a one-time resource fix.

A global economy dependent on this nonsense is already failing and its ultimate collapse is only a matter of time. For a surprisingly long time, we humans have successfully maintained the illusion that we are outside of, superior to, and not subject to the rules of nature. We do so, however, at a huge cost, and payment is coming due.

To secure the health and happiness of future generations, we must embrace life as our defining value, recognize that competition is but a subtext of life’s deeper narrative of cooperation, and restructure our institutions to conform to life’s favored organizing principle of radically decentralized, localized decision making and self-organization. This work begins with recognizing what nature has learned about the organization of complex living systems over billions of years.

Some indigenous people speak of the “original instructions.” Chief Oren Lyons, of the Onondaga Nation, summarizes the rules in “Listening to Natural Law” in the anthology Original Instructions:

“Our instructions, and I’m talking about for all human beings, are to get along … with [nature’s] laws, and support them and work with them. We were told a long time ago that if you do that, life is endless. It just continues on and on in great cycles of regeneration. … If you want to tinker with that regeneration, if you want to interrupt it, that’s your choice, but the results that come back can be very severe because … the laws are absolute.”

The human brain evolved to reward cooperation and service.

Modern neuroscience affirms that the human brain evolved to reward cooperation and service. In other words, nature has hard-wired the original instructions into our brain. Extreme individualism, greed, and violence are pathological and a sign of physical, developmental, cultural, and/or institutional system failure. Caring relationships are the foundation of healthy families, communities, and life itself.

We are living out the consequences of our collective human failure to adhere to the original instructions—the organizing principles of healthy living systems readily discernible through observation of nature at work. These are the principles by which we must rethink and reorganize human economies.

So how would nature design an economy? An economy is nothing more than a system for allocating resources to productive activity—presumably in support of life. In fact, nature is an economy, with material and information exchange, saving, investment, production, and consumption—all functions we associate with economic activity. Absent human intervention, as Lyons says, “It just continues on and on in great cycles of regeneration.”

Nature surrounds us with expressions of the organizing principles that make possible life’s exceptional resilience, capacity for adaptation, creative innovation, and vibrant abundance. Earth’s biosphere and the human body are two magnificent examples.

The Economy of the Biosphere

Earth’s exquisitely complex, resilient, and continuously evolving band of life—the biosphere—demonstrates on a grand scale the creative potential of the distributed intelligence of many trillions of individual self-organizing, choice-making living organisms. Acting in concert, they continuously regenerate soils, rivers, aquifers, fisheries, forests, and grasslands while maintaining climatic balance and the composition of the atmosphere to serve the needs of Earth’s widely varied life forms. So long as humans honor the original instructions, the biosphere has an extraordinary capacity to optimize the capture, organization, and sharing of Earth’s energy, water, and nutrients in support of life—including human life.

In nature, species and individuals earn a right to a share in the bounty of the whole as necessary to their sustenance through their contribution to the well-being of the whole. Over the long term, those that contribute prosper, and those that do not contribute expire. The interests of the whole are protected against rogue behavior by natural limits on the ability of any individual or species to monopolize resources beyond its own need to the exclusion of the needs of others.

Individuals and species may compete for territory and sexual dominance, but the amount of territory or number of mates nature allows an individual or species to claim is local, limited, and subject to continuous challenge. Until humans began to create the imperial civilizations characteristic of our most recent 5,000 years, the idea that any species, let alone a few individual members of a species, might claim control of all of Earth’s living wealth to the exclusion of all others was beyond comprehension.

The Economy of the Body

The human body is a more intimate demonstration of the creative power of life’s organizing principles. The individual human body comprises tens of trillions of individual living cells, each a decision-making entity with the ability to manage and maintain its own health and integrity under changing and often stressful circumstances. At the same time, each cell faithfully discharges its responsibility to serve the needs of the entire body on which its own health and integrity depend.

Working together, these cells create and maintain a self-organizing human organism with the potential to achieve extraordinary feats of physical grace and intellectual acuity far beyond the capability of any individual cell on its own.

We would favor local, cooperative ownership and control.

Each decision-making, resource-sharing cell is integral to a larger whole of which no part or system can exist on its own. Together they create regulatory mechanisms internal to the whole that work to assure that no part asserts dominance over the others or monopolizes the body’s stores of energy, nutrients, and water for its exclusive use. Resources are shared based on need.

All the while, the body’s cells self-organize to fight off a vast variety of viruses, cancer cells, and harmful bacteria, adapt to changing temperatures and energy needs and variations in the body’s food and water intake, heal damaged tissues, and collect and provide sensory data to our conscious mind essential to our conscious choice making.

Another of the many impressive expressions of the body’s capacity to self-organize is the process by which our cells continuously regenerate while maintaining the body’s integrity as a unified organism. The cells lining the human stomach have a turnover of only five days. Red blood cells are replaced every 120 days or so. The surface of the skin recycles every two weeks. The cells of the body are constantly reproducing, growing, and dying.

A Human Economy Based on Nature

If nature were in charge of creating an enduring human economy, she would surely apply the same principles she applies in natural systems. Her goal would be a global system of bioregional living economies that secure a healthy, happy, productive life for every person on the planet in symbiotic balance with the non-human systems on which we humans depend for breathable air, drinkable water, fertile soils, timber, fish, grasslands, and climate stability. Each bioregional economy would meet its own needs for energy, water, nutrients, and mineral resources through sustained local capture, circular flow, utilization, and repurposing. Decision making would be local and the system would organize from the bottom up. Diversity and redundancy would support local adaptation and resilience.

The challenge is epic in its proportion and long overdue.

This should be our goal and vision. With the biosphere as our systems model, we would design our economic institutions and rules to align with nature’s rules and organizing principles. We would replace GDP as the primary measure of economic performance with a new system of living system indicators that assess economic performance against the outcomes we actually want—healthy, happy people and healthy, resilient natural systems. These indicators might be based on Bhutan’s Gross National Happiness Index. We would redirect the time, talent, and money we currently devote to growing GDP, material consumption, securities bubbles, and Wall Street bonuses to producing the outcomes we really want.

We would favor local, cooperative ownership and control. Organizing from the bottom up in support of bioregional self-reliance, our economic institutions would support local decision-making in response to local needs and opportunities. Cultural and biological diversity and sharing within and between local communities would support local and global resilience and facilitate life-serving system innovation.

The result would be an economy based on a love of life that honors the original instructions and conforms to the organizing principles of nature, real markets, and true democracy. The challenge is epic in its proportion and long overdue.

We are Earth’s children; she is our mother. We must honor and care for her as she loves and cares for us. Together we can forge an integral partnership grounded in the learning and deep wisdom of her 3.8 billion-year experience in nurturing life’s expanding capacities for intelligent self-organization, creative innovation, and self-reflective consciousness. 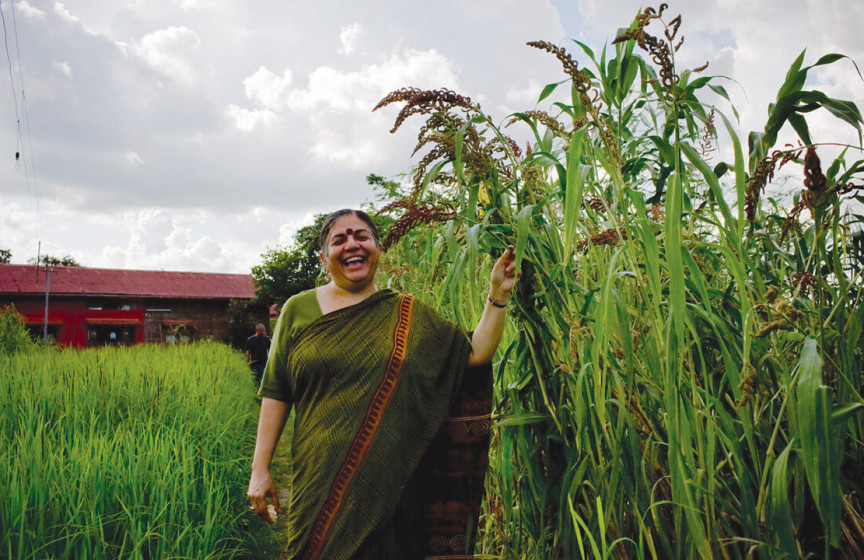