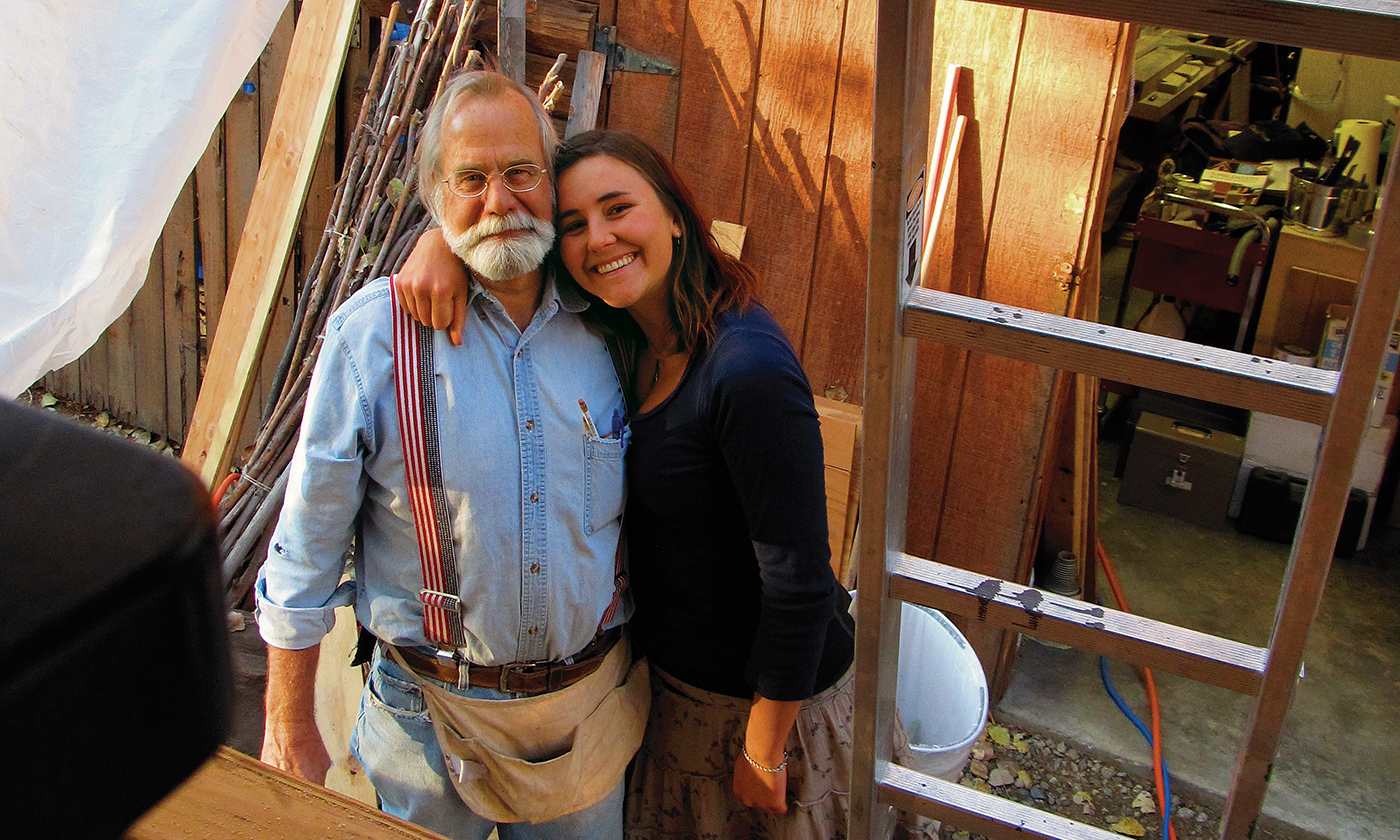 Recent college graduate Ella Jenkins lives with her parents while she builds her 103-square-foot home in their yard.

With 5 million houses in foreclosure, we are rediscovering that living sustainably includes living affordably.

The real estate bubble that kicked off the 21st century taught us some things that a home isn’t. It isn’t a way to get rich quick. It isn’t a cash machine. It isn’t a speculative investment that’s guaranteed never to lose value.

This is not to make light of the pain of people who have suffered from the real-estate-fueled financial meltdown. It wasn’t the buyers who made those claims about residential real estate—it was the people who were making the loans. Say what you may about undeserving people getting loans they shouldn’t have gotten, but remember one thing: not one of the borrowers ever approved a loan. That was done by the people who made money writing the loans.

Few of the people who bought during the bubble have gotten any help from banks or the government. Lenders and speculators, on the other hand, got billions in bailouts. CoreLogic, which provides analytical data on real estate and financing, estimates that, in the fourth quarter of 2011, the difference between the current value and the amount owed for underwater loans was $717 billion. That is hardly more than the $700 billion handed over instantly to banks and corporations in the early days of the financial meltdown—and a fraction of the trillions in loan guarantees and other assistance the big players got. We could have reduced the principal on every underwater loan to current market value for less money than we’ve pumped into the banks and corporations that caused the problem in the first place.

It’s a perfect time to take a look at what it means to own a home, to make a home, to rent a home.

Experts speculate about when housing prices will return to previous levels. But why would that be a good thing? We were paying too much for houses that were much too big.

But the residential real estate market remains a mess, with 2.7 million foreclosures during 2011 alone, and many more to come. This has been an “unprecedented cycle,” says Walter Molony, spokesman for the National Association of Realtors. “We’ve never had this kind of mortgage market before, and it’s going to be at least another year or two before foreclosures stabilize.”

And the crash has expanded well beyond the much-maligned subprime market. High unemployment following the financial meltdown has left previously rock-solid homeowners losing their homes to foreclosure in record numbers.

The Census Bureau estimates that, in 2011, there were 18.7 million houses standing empty, even as hundreds of thousands of people were homeless. The giant houses that were an ostentatious display of wealth are now millstones holding their owners underwater, worth far less than the debt owed on them.

Experts speculate about when housing prices will return to previous levels. But why would that be a good thing? The previous levels were unrelated to real value. We were oversold, paying too much for houses that were much too big.

It’s a perfect time to take a look at what it means to own a home, to make a home, to rent a home. This is an opportunity to take the best from the old ways of doing things, and from the new, and to define “home” in a way that doesn’t place unsustainable burdens on resources, both natural and fiscal.

Some of the solution lies in adjusting our expectations about what a household looks like and how much space we really need. Some of it lies in recognizing that, in a world where our energy use is destroying the climate, we have to change the way we put our houses together.

Home is where you stay

One thing we lost sight of during the bubble is that, traditionally, a home wasn’t a speculative investment. In fact, houses typically appreciated not much faster than a savings account. You bought a house as a form of security. Unlike renters, you didn’t face the possibility of having to move if the owner sold or lost the house to foreclosure. You could paint it the color you wanted, add rooms, knock out walls. You could turn the lawn into a garden or plant trees that took years to grow and bear fruit. Once you paid off the mortgage, you burned it—with ceremony and a sense of relief—and you didn’t refinance.

When people bought houses and intended to stay, they made a commitment to the community. They made lasting connections with people and businesses. Once a house became something that you owned just long enough for the big cashout, those connections were lost.

There’s a simple way to make a huge difference right away in both the environmental and financial impacts of housing. Unfortunately, in light of the “bigger is better” story that has become firmly entrenched in the American belief system, the simple solution is not the easy one. Plainly stated, it’s this: Small is beautiful.

The average American now has about 961 square feet of space. That’s awfully close to the average size for an entire house in 1950, when we managed with 259 square feet per person.

It’s not a deep concept. Smaller houses cost less to build. It takes less furniture to fill them. They cost less to heat and cool. For existing homes, you can come close to cutting the environmental footprint in half just by doubling the number of people living in the space. Jason McLennan, who developed the Living Building Challenge, proposes that, regardless of “green” features, large houses simply cannot be environmentally sound. He says that, on average, 450 square feet per person is as big as we should go-—and smaller is better.

The modern trend, however, is exemplified by a radio ad campaign that ran about ten years ago. The ads featured people shouting across distances, with lots of echo effect—they were in their gigantic living rooms. There was one in which a guy got lost in his huge house. That, the builder assured us, was what we should aspire to.

Asking Americans to crowd together is asking a lot, right? It’s asking us to return to some primitive state with people crammed cheek-by-jowl into hovels.

That would be correct, so long as you consider 1950 to be a brutal and primitive time. There were a lot of things wrong in the ’50s that we don’t want to recapture. But living in small spaces was not something that people complained about. And here’s a fact: The average American now has about 961 square feet of space. That’s awfully close to the average size for an entire house in 1950, when we managed with 259 square feet per person.

Why, over the course of just 60 years, did we triple our living space? In part, because we could. Building materials were cheap. The energy to run a house was not too costly. For builders, whose main cost is labor, the profit margin on a big house is greater than on a small one. We slipped into a feedback loop, where builders pushed bigger houses and consumers, seeing what everyone else was buying, started demanding them. Once square footage became the key measure of value, banks were less interested in loans on small houses.

A Pew Research poll of people living in multigenerational homes found about 80 percent reporting that the living arrangement had strengthened family bonds.

There are signs that the trend is reversing. The average size of a new house peaked in 2007 and has gone down since. But so far that only replicates what happened during past recessions—although the decrease is larger this time. The question is whether we return to the pattern of ever-increasing house size if the current recession ends for everyone, not just the rich.

The growing popularity of tiny homes is hopeful. Often owner-built, these sub-200-square-foot houses are the epitome of affordability and efficiency. They’re not for everyone, but everyone seems to find them fascinating.

There’s also hope in the growing trend toward “doubling up,” whether in the form of multigenerational households or shared living with people of different families. For the moment, this is a matter of economic necessity as people who have lost their jobs and homes move in with relatives, and recent college graduates, saddled with debt and unable to find work, move back in with their parents.

But this may be the beginning of remembering that people can thrive in smaller spaces. A Pew Research poll of people living in multigenerational homes found about 80 percent reporting that the living arrangement had strengthened family bonds. (A similar percentage reported that it had increased tension—the two are not mutually exclusive.)

We can expect to see more doubling up as a matter of necessity as baby boomers enter their elder years with retirement funds depleted by the housing and financial crashes. But as it becomes more normal for people to use less space, we may figure out that what worked in the 1950s was much closer to what we really need.

Then we can convert the giant houses of the bubble into multifamily housing; make sure new housing is small, green, and affordable; and have a shot at housing everyone without destroying our habitat.