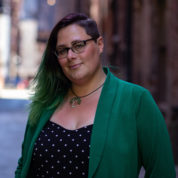 is the editorial director at YES! An award-winning investigative journalist with a background covering LGBTQ equality, Sunnivie previously led digital coverage at The Advocate, Free Speech TV, and Out Front Colorado. Her writing has appeared in Vox, Religion Dispatches, them., and elsewhere. She has a degree in magazine journalism from the S.I. Newhouse School of Public Communications at Syracuse University, and is a co-founder of Historias No Contadas, an annual symposium in Medellín, Colombia that amplifies the stories of LGBTQ people in Latin America. She is based in Seattle, speaks English and Spanish, and is a member of NLGJA, SPJ, and ONA.

Include your name, the article headline, and your message.

Email Author
Articles By This Author

Opinion | Social Justice
Pulse Wasn’t About Me. But Covering It Changed Me
As one of the few out queer journalists covering the tragedy on the ground, I learned that my identity served my work, not hindered it.
Sunnivie Brydum    |   Jun 12, 2019

Issues
The World We Want in 10 Years
Nothing makes you consider the state of the world like having a child. As my spouse and I prepare to welcome our firstborn, I find myself taking stock of my community, my surroundings, and my intentions, wondering what kind of world my child will inherit. But wondering doesn’t change what’s possible. Changing the future saving the future—requires active participation, sacrifice, compromise, collaboration, and creativity.
Sunnivie Brydum    |   Feb 19 2020