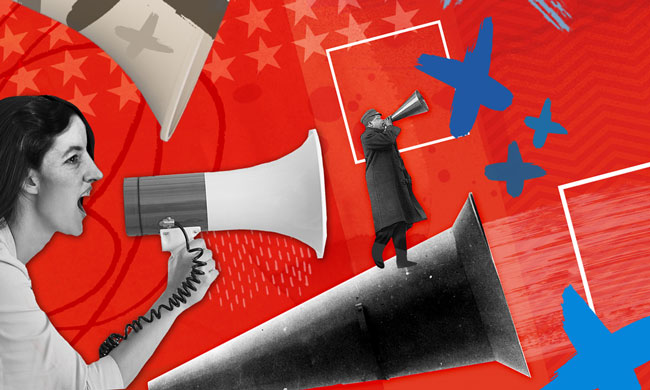 Voting won’t solve the nation’s problems. But it’s a start.

On Election Day, what do you do if you were a die-hard Bernie Sanders fan and are now faced with a ballot that offers you a choice between Hillary Clinton and Donald Trump, whose favorability ratings are the worst among presidential candidates since CBS News and The New York Times started polling in 1984? Do you skip the booth altogether? Maybe. Only about 65 percent of Americans 18 and older are registered to vote, according to U.S. census data from 2012, and only about 58 percent actually vote.

Why vote if you hate everything on the ballot? Elections are about more than the candidates. They’re about voters, too, and what issues they think deserve attention. Here are five reasons to voice those issues with a vote.

1. People who vote the least have the most to lose this election.

The deportation of U.S. birthright citizens isn’t likely, says Faye Hipsman, an associate policy analyst at the Migration Policy Institute, but another Trump proposal is: ending the Deferred Action for Childhood Arrivals program, which protects from deportation those U.S. immigrants who arrived as children.

2. If you’re not down with a President Trump or President Clinton, there is always a third party.

In 1992, Ross Perot won nearly 19 percent of the popular vote running as an independent candidate. That was nearly 20 million votes—plenty, but not enough to win an election. Some claim this cost Republican candidate George H.W. Bush a second term. Eight years later, Republican George W. Bush beat Democrat Al Gore. Gore won the popular vote but lost the electoral vote by five votes. The third-party candidate, Ralph Nader, was blamed. He gathered nearly 3 million votes, which some argue would have gone to Gore. Then again, if Nader—or Perot—hadn’t been on the ballot, maybe their supporters wouldn’t have voted at all.

Voting is personal. People vote because they want to give voice to their beliefs.

The past two Obama elections show what’s possible when people of color come out to vote—even though they made up only about 27 percent of all voters nationwide for each election. The Pew Research Center points out that if it weren’t for his non-White constituency, Obama would have likely lost re-election in 2012, when 59 percent of White voters sided with Mitt Romney.

Why don’t people vote? Let’s look back, all the way to the 19th century.

In 1896, Republican William McKinley defeated Democrat William Jennings Bryan in an election that introduced many modern campaign techniques: cross-country speeches, extensive fundraising, and polling to target specific voters. Voter turnout before and during that election hovered around 80 percent; afterward, it averaged only 65 percent.

Historian Mark Kornbluh, in his 2000 book Why America Stopped Voting: The Decline of Participatory Democracy and the Emergence of Modern American Politics, blames a changing American culture. Politics lost its “entertainment value” as sports and theater hit the mainstream. Spectacle-style campaigns replaced participatory-style campaigns that invited the public to shape a candidate’s platform. Kornbluh theorizes that voters grew disinterested when they felt unnecessary to a campaign.

4. Let them know you exist and that you’re not satisfied—write in a name.

At the 2015 Equity Summit, Linda Sarsour, executive director of the Arab American Association of New York, spoke to people of color. “If voting didn’t matter, they wouldn’t be trying to take your right to vote away from you,” she said. If you don’t like the candidates, write in someone else, even your mother, Sarsour said. “The idea is to be counted.” Her argument is that people need to show up if they want politicians and decision-makers to listen to them. This is especially true for low-income people. In 2012, only 1 in 4 voters earning less than $10,000 turned out. When these citizens don’t cast votes, their views remain un- or misrepresented.

At least seven write-in candidates have made it to Congress, including South Carolina Republican Strom Thurmond in his first bid for the U.S. Senate.

5. Consider all the people who have an important opinion but can’t vote.

Some people can’t vote because their local laws require strict identification that they won’t have in time for Election Day or because their work schedules are so demanding they can’t take off five hours to wait in line. Shorter early-voting periods in states like Georgia and North Carolina also create obstacles for people. And some can’t vote because they aren’t naturalized citizens (even if they’ve spent most of their lives in the United States) or because a criminal record prevents them. Some 5.8 million Americans cannot vote because of a past felony conviction.

Americans are free to do as they please, and voting won’t solve the nation’s problems. But it’s a start—especially in this election, when the security of so many is at stake.