When You Don’t Have a Traditional Job, This Is How You Get Creative

All photos by Martin do Nascimento.

When You Don’t Have a Traditional Job, This Is How You Get Creative

Austin, Texas, leads the nation in people with jobs outside the 9-to-5 economy.

Shooting this assignment and meeting folks doing gig work all over Austin, Texas, I was surprised by the variety of perspectives that people have on working in the gig economy. Ask two rideshare drivers or two day laborers and you’ll often get two completely different answers. One will tell you they love the flexibility, the variety of the work, and being their own boss. The other will tell you they can’t stand the uncertainty or the relentless competition with their peers.

When You Don’t Have a Traditional Job, This Is How You Get Cre…

Austin, Texas, leads the nation in people with jobs outside the 9-to-5 economy. See the full story here: http://bit.ly/2bJE3SC #IamtheGigEconomy

I’m a freelance visual journalist, and my own experience is that you can love the flexibility and dread the uncertainty. You can savor the variety and wish for more stability.

For this project I spent a fast-paced 48 hours photographing gig workers around Austin, which, along with Los Angeles, has the nation’s highest rate of 1099 jobs. I hired rideshare driver Raymond Ledesma, featured in the portraits. Since Uber and Lyft don’t operate in Austin anymore, a good number of rideshare drivers organized independently to offer city residents similar services but without the middleman. Drivers and riders coordinate through “Arcade City Austin” and “Austin Underground Rideshare Community” groups on Facebook. Raymond and I drove all over town—from Miss Grace’s Airbnb to Eric’s pedicab workshop to Rat’s South Austin bungalow—visiting with folks and taking pictures of them before running back to the car, tossing the camera gear in the back, and taking off for the next stop.

Do you work a gig (or two)? Share your story in the comment section below or with #IamtheGigEconomy.

Raymond Ledesma used to drive for Uber and Lyft before Austin voted to reject Proposition 1 in May, which jettisoned the ridesharing giants from the city. “I’ve never been one for a 9-to-5 job, and offering rides has been a good way to make a good income. But I also work for a home remodeling company.”

Eric Vanase, a welder by trade, has been working part time as a bicycle taxi mechanic for the past year because he cannot find work as a welder in Texas. “I’d rather have a job in a factory for 40 hours, but I can’t. I’ve been looking for work. It’s pretty rough. I’m just trying to make a living.”

Sally Villarreal juggles three part-time jobs to make a living because health problems have made it difficult for her to keep a full-time job. Villarreal telecommutes part time to evaluate search engine performance and delivers food for Postmates, an online food delivery service, both while pursuing her passion for teaching knitting and crochet. She credits her parents’ support and Obamacare for her being able to maintain her livelihood. “My medical issues get in the way more than anything. I can’t sit down or be standing for a long period of time. I’d like to do something full time with knitting [in the future,] but I don’t know how reasonable that is. It’s more of a daydream at this point.”

Miss Grace and Joe Bones renovated two aging houses in East Austin and began renting them on Airbnb in 2014 to fund their myriad other part-time occupations, including skateboarding instructor, massage therapist, clown, and yoga instructor. “Life is crazy and erratic, and I think when you try to stick it in this 9-to-5 [job], you just meet frustration. Who can plan that? Life is not that plan-able.”

Quinton Boudwin, a freelance videographer and recent graduate of the University of Texas at Austin, has found it hard to get full-time videography work. He is currently an unpaid intern at Austin NPR affiliate KUTX and works part time for a local video production company. “It’s a very difficult market. You have to constantly keep up with your peers, who are your competition. It’s not like you come home at 5 p.m. and say, ‘All right, I’m done.’”

Tattoo artist Erik Axel Brunt has been renting a tattoo booth at Austin’s Triple Crown Tattoo since 2013. Although it was hard at first to make ends meet with the booth rental business model, he says, online advertising and repeat customers have made his tattoo gig profitable. “This is how I pay my bills. It’s a pretty demanding and competitive career, especially in a tattoo city. It was definitely a little uncomfortable [financially] at first.”

Raul Martinez, a day laborer from El Paso, Texas, who was recently released from prison, comes to an Austin-area Home Depot parking lot every day at 7:30 a.m. in the hopes of getting work for the day. His work has ranged from digging ditches and laying cement to trimming trees. Since being released from prison, Martinez has had difficulty landing other work because of his criminal record. “Out here it’s like rolling the dice. You see all the people. There’s about 50 of us. It’s hard getting jobs out here.”

Becca Borrelli, a freelance artist, has been selling her illustrations on Etsy, an online sales platform tailored for artists, since 2013, but has several part-time jobs to make ends meet, including teaching signmaking and art and waiting tables. “I’m not sure how everything is going to end up. When you’re working a lot of jobs, there’s not really a blueprint.”

German Lopez Aguilar, a day laborer from Honduras, comes to an Austin-area Home Depot parking lot on his days off from his unsteady construction job in the hopes of getting work for the day. The work typically ranges from construction to gardening. “Sometimes there are people who don’t pay us. There are also people who take advantage of immigrants and pay very little money. We arrive really early in the morning, and sometimes we get off work late.”

Lisa Alley, bassist and vocalist in Austin-based psychedelic doom metal band The Well, works as a barista in Austin to pay rent when she is not on tour. Formed in 2012, her band tours across the United States for several weeks each year. “The biggest challenge is the actual physical energy of working. I love the job at the coffee shop. Everyone in the band has jobs to pay rent, and the jobs are physically and psychologically draining. When you get home, you don’t necessarily want to create. You want to kick your feet up and relax like anyone else.”

Steve “Rat” Silvas, keyboardist, supplements his music career with his Tejano band Canonazo by working as a custodian at the University of Texas at Austin. Recently inducted into the Tejano Roots Hall of Fame, Silvas has played for more than 40 years, including a long stint as keyboardist and producer for Grammy Award-winning Tejano band Little Joe y La Familia. “The Texas market is really congested. There are so many Tejano bands. It’s hard, but you just have to be consistent.” 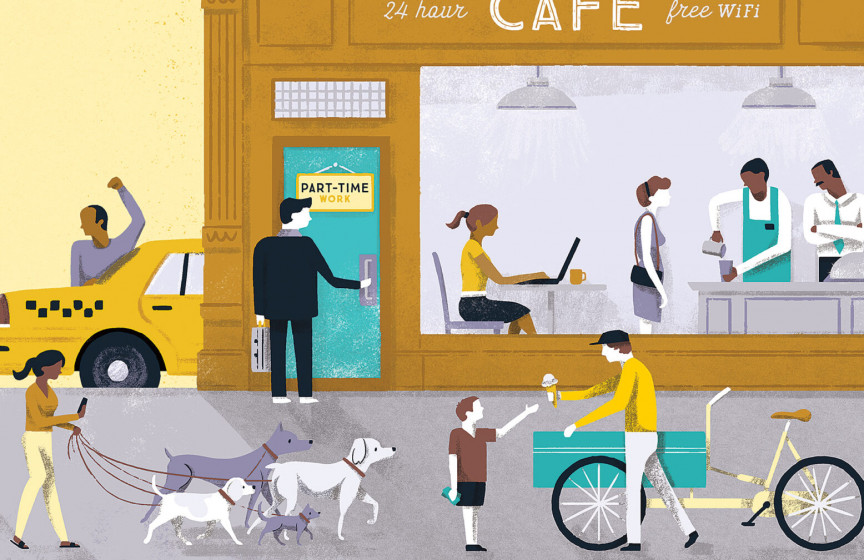